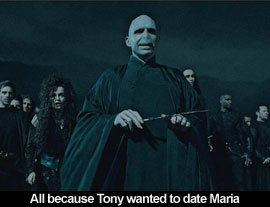 by Walter Chaw SPOILER WARNING IN EFFECT. Not having read the final book in the Harry Potter series, I fear I spent the last hour-and-a-half of Harry Potter and the Deathly Hollows Part 2 (hereafter Harry Potter 7.2) thinking that Professor Snape (Alan Rickman) was Harry's father. And there's the problem, really--not that it's so insular that only people who've read the books can understand it, but that it's so myopic in its insularity that it doesn't realize that what it's saying on the screen is pretty contrary to what's explained on the page. It's not that there wasn't time, either, over the course of these five hours, to address obvious misunderstandings and obscurities (why, for instance, doesn't everyone always cast the "kill" spell, since it seems pretty effective), as there was certainly enough time to pack in a horse-cart full of characters pointing to their chests and weepily declaring that their dead pals will "always be right here." Mostly, it reveals an author in J.K. Rowling--who was setting up a genuinely extraordinary ending to her dip in the archetype pool--engaged in a lot of self-pitying sobbing over grandiloquent gestures, group hugs, and an epilogue set 19 years hence that brazenly sucks, simply because she didn't have the muscle to pull the proverbial trigger. More egregiously, by failing to honour her own story with the proper ending, Rowling betrays real post-feminist icon Hermione Granger (Emma Watson), the "most gifted wizard of her generation" (and low-born to boot), squandered to tertiary status in this instalment before being dismissed into domesticity. An author who by the end was driven perhaps too much by her fans (she admits in an interview that she "didn't have the heart" to kill Arthur Weasley--one wonders if she ever considered killing Harry as she ought) is behind a handsome, crisp film that is, alas, ultimately for her fans only.

It's a particular shame, because the picture seems defeated not by director David Yates, who rebounded nicely from the mess of Harry Potter and the Half-Blood Prince with the doom-laden, apocalyptic war idyll of Harry Potter 7.1, nor by its cadre of young actors, who've grown comfortably and invisibly into their roles, but by source material that, no matter its body count and levelling of beloved landmarks, frankly hasn't matured at the same rate as the rest of it. Consider that in its rage for explication, Harry Potter 7.2 actually descends to platitudes. It mandates that its largest sacrifices are made by either anonymous characters or a Dumbledore shown to be already mortally ill, which drastically lessens the impact of his sacrifice. Its nominal hero becomes Snape, then, given a vile, bloody demise and an enigmatic exit line delivered as only Rickman playing dying could deliver it--a distraction in the middle of all those pyrotechnics and bridges falling that will play like valediction for the diehard and muddle for the rest of us muggles. It won't matter, but it sticks in my craw a little that this blockbuster series that has comported itself for the most part with artistry and inclusiveness reduces itself to a love letter for Rowling's readership, requiring Herculean feats of disbelief suspension when gaping holes in its own logic are expected to be patched with paste made of the book's pages. And why is it that when wands are drawn for a final castle siege, the only thing they appear to do anymore is function as laser blasters, carving the backgrounds around the Carbonite Duel from The Empire Strikes Back repurposed with Harry (Daniel Radcliffe) and Voldemort (Ralph Fiennes having a great time, thanks). What's the spell for "Star Wars"? And why is it that when Voldemort has Harry in a cruciform posture with his animated robe, he lets him free? And what is Hagrid (Robby Coltrane) doing in the forest in ropes? And why doesn't our heroic trio of Harry, Ron (Rupert Grint), and Hermione (Emma Watson) give the pilfered wand of evil Bellatrix Lestrange (Helena Bonham Carter) to the banker goblins once asked for it? And why don't the Gringotts guards fire at the dragon as it escapes? I'll ask my daughter. She's seven, I suspect she'll know.

Despite the final novel's split into two films, Yates is still unable to strike a balance between the sober apocalypse of the first part and the need for closure of the second--between the demands of the small audience that has only seen the films and the greater one that has read the books and seeks the extra-sensory validation of their interior projections (and for what that's worth, the 3-D here is useless and dim). But it's not his fault. For his part, there are lovely moments in Harry Potter 7.2. There's the image of the ugly, fetal piece of Voldemort suffering unto death under a bench in Harry's vision of Heaven, as well as the animation and execution of a pale white dragon that is the most tangible (if underused) dragon in a film since Dragonslayer's Vermithrax Pejorative. There's the entirety of Ralph Fiennes's disgusting dark lord, all insecurities and cruelties, packing a giant snake like a great Freudian joke and crumpling after it's beheaded in a punchline the Austrian neurologist would have appreciated. There's Alan Rickman, too, the star of this show in one short speech, one extended flashback, and a brief death scene so eloquently played that if you don't already understand what it all means it will confuse the entire resolution of the film--an unexpected consequence of having the wisdom to hire this breed of actor to underplay a melodrama eating its own tail to avoid distressing a readership it's decided is fragile. There's the sequence with the Grey Lady (Kelly Macdonald), a ghost who threatens at any moment to become terrifying in Macdonald's magnificent, awful reserve; and a tiny sequence with venal Goblin Griphook (Warwick Davis) that reveals that almost without exception, it's the over-30 set who've provided this franchise its ballast and gravity.

After all the books, all the films, all the Catholic condemnation and cultural revolution, we come to this end with more whimper than bang and enough congratulations and blame to go around. Like the novels, the movies were headed, I think, for a kind of hybrid status as something both incredibly popular and incredibly good: the unnatural union between high and low culture we've been looking for since the Coliseum was selling out mass executions. But like the books again, the films sputter out to offer a completely acceptable, utterly predictable "out" that spares every single one of our favourites and presents them as fat, happy, and thoroughly unexceptional. They're no longer tortured by their difference because they're not different. They're not haunted by empty sacrifices and missed opportunities, because every sacrifice is a martyrdom and every opportunity is fulfilled with the clacking inexorability of key teeth fitting in a lock. At its best, this series operated entirely in the grey areas of class, race, honour, the meanings of courage, the significance of chance, the possibility of predestination, the romance of fate. At its conclusion, all it wants to do is tidy up before turning out the lights. Harry Potter and the Deathly Hollows Part 2 is probably the best film that could have resulted from the last few hundred pages of Rowling's epic--moments of it even threaten to overcome the mortal weakness in its conception. (There's a bitter analogy in there to Harry's own saga as an average kid saddled with the burden of being Superman.) Really, it's not that bad. But at times not just this film but these films seemed on that delicate, numinous cusp of becoming something better than merely adequate. Originally published: July 15, 2011.