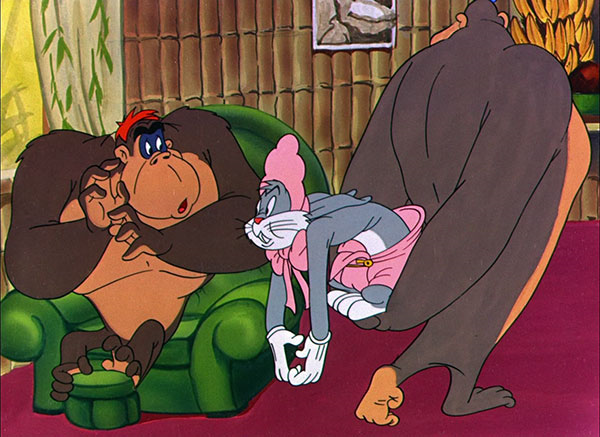 by Bill Chambers Bugs Bunny floats in a barrel to the ape colony of Bingzi-Bangzi, where Mrs. Gorilla, in the throes of baby envy, mistakes him for a delivery from the stork. A sympathetic Bugs goes along with it, but her husband Gruesome--an obvious relative of Bunny Hugged's The Crusher--is vexed by the impostor, and opens up a can of whup-ass on "Junior." Although Bugs's pantomime of a gorilla brings down the house (Robert McKimson's paunchier Bugs really lends itself to the gag), ultimately the central conflict is too esoteric to sustain a 7-minute cartoon, as evidenced by a non-ending that has Gruesome simply wearing himself out. Also, Mrs. Gorilla's emotional fragility is almost unbearably poignant and palpable; sometimes the folks at Termite Terrace didn't know their own strength. Loosely remade eleven years later under Friz Freleng's direction as the considerably less charming and more literalminded The Apes of Wrath--a spoof title that appears on a book cover in Gorilla My Dreams (along with "Our Vines Have Tender Apes") in a tableau of an ape family sitting together reading that bespeaks postwar ideals. Alternate Audio (Blu-ray/DVD): Jerry Beck, co-author of the indispensable Looney Tunes and Merrie Melodies: A Complete Illustrated Guide to the Warner Bros. Cartoons, sheds light on the pop-culture references destined to sail over the heads of young viewers and takes inventory of McKimson's stylistic hallmarks. Available on: Looney Tunes: Platinum Collection, Volume Three [Blu-ray]