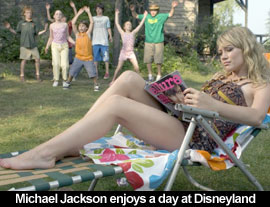 by Walter Chaw I spent altogether too much time during Cheaper by the Dozen 2 anticipating the moment when Hilary Duff would snuffle some sugar cubes out of a little girl's hand--but in my defense, what else was there to do? I feel strange saying that this film is unwatchable because, hey, I'm proof that, technically, it is watchable; I guess I should say that it's highly inadvisable to watch this film. I want to be clever, to turn a phrase that better illustrates the point, but in cases like these it's probably better to be straightforward. If you find yourself in a theatre with this film, leave. It's awful. Director Adam Shankman is the Uwe Boll of family movies: he doesn't know how to pace a picture, he has no idea what to do with a camera (check out an outdoor banquet sequence that looks like it was shot under muddy water), and his use of John Debney's atrocious, hate-crime of a score should set off Amnesty International's radar. This is film as punishment, I'm serious. It's never funny, never insightful, never valuable in any way. Kids might like it in the way that kids like anything that's short and kinetic, yet the film preys upon a consistent mass hunger for "family" entertainment, and children and idiots deserve better supervision. Family films in the United States seem defined only as having no "objectionable" content, such as non-cartoon violence, a whiff of poetry, or any hint of sexuality. At the risk of being a rebel, let me offer the heretical view that the only content that's truly objectionable is witless sludge like Cheaper by the Dozen 2.

Taking place some time after the events of Cheaper by the Dozen (director of that stillbirth, Shawn Levy, makes a cameo in this one, what with all the time on his hands waiting for Sony to discreetly dump his long-completed Pink Panther in theatres next spring), the film reacquaints us with dangerously irresponsible breeder couple Tom (Steve Martin) and Kate (Bonnie Hunt) Baker (as in "Baker's dozen," get it? Ha ha ha--except that they only have twelve kids and a "baker's dozen" is thir...oh, fuck it) and their twelve children. The picture opens with the whole clan gathered at princess Lorraine's (Duff) high school graduation, including very-pregnant Nora (Piper Perabo) and her husband Bud (Jonathan Bennett), who, I think, was played by Ashton Kutcher in the first film and used to be named Hank. A few sentimental moments--including dog reaction shots, weeping bassoons, and an old family photo album (hey, Bud used to be a lot prettier! And named Hank!)--compel Tom to coerce his family to take "one last" vacation at some lake where their old rental house is still presided over by an old family friend and a rat that, periodically, steals something and causes the girls to scream. Relocating the tribe to this summer camp-ish location allows the braintrust to conjure up a villain in Eugene Levy's Jimmy Murtaugh and his bimbo trophy-wife-with-a-heart-of-gold Sarina (Carmen Elektra). Understand that I'm not calling Elektra a bimbo, I'm just observing that Cheaper by the Dozen 2 gets a lot of yuks at her expense for having large breasts, being an ex-actress, getting humped by the Baker family dog, and having an ogre like Jimmy for a husband. It's a wonderful message for a family film, I'm sure you'll agree.

Meanwhile, in a couple of Romeo and Juliet subplots, blank cipher hunk Charlie Baker (Tom Welling) starts up an entirely heatless flirtation with blank cipher babe Anne Murtaugh (Jaime King), and adorable proto-lesbian Sarah Baker (Alyson Stoner) tries on the "femme" when doe-eyed proto-extreme sports star Eliot Murtaugh (Taylor "Sharkboy" Lautner) turns his attentions to her "coolness." The other kids (a few of whom feel like they've been recast, but it hardly matters) come across as painted backdrops for what little time they get--exception being Duff, of course, who Tobey Maguire saddles up and inspirationally rides around the track a few times. All this crapulence is set against the backdrop of an annual Labor Day competition that pits family against family in a battle of log-rolling, three-legged races, and egg tosses as Cheaper by the Dozen 2 tries unsuccessfully to provide the ultra-competitive Tom and Jimmy some sort of backstory reaching back to dual unhappy childhoods.

It's a dark echo in there, side-by-side with Jimmy's grim dedication to buying up lakefront property and turning this prelapsarian wonderland into an exclusive, members-only club, but the film explores neither beyond their mention and contents itself to wrap up with a few scenes of mayhem, three insipid montages set to horrible music, and the same finale involving the birth of a child it seems like Martin has done now in a good half of his films. I've long since given up on Levy (something about his child-catcher role in New York Minute (as well as his impenetrable avant-garde turns in Christopher Guest's arrogant flicks) have turned me right off), but Martin, one of the smartest, most transgressive comics of his generation, you just sort of want to like. Reuniting here with his Bringing Down the House partner in crime, though, tells me that his soul--and he does appear to have one (see the not very good but certainly soulful Shopgirl, for instance)--is for sale, dirt cheap. Originally published: December 21, 2005.