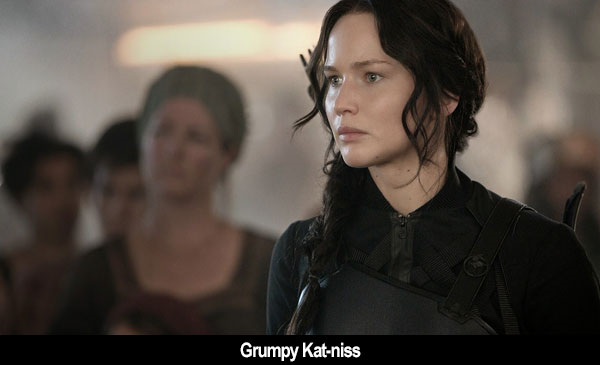 by Walter Chaw In this episode of "Katniss Loves Peeta--No, Gale. No, Peeta! No, Gale", Katniss (Jennifer Lawrence) spends a lot of time underground, delivering speeches and crying. It's an extended entry in hormonal-teen mood-swing theatre, The Hunger Games: Mockingjay - Part 1 (hereafter Mockingjay 1), an allegory not for political corruption and the Orwellian influence of media, but for what it's like to be a teenage girl no one understands or ever could. It's "Are You There God? It's Me, Moreta, Dragonlady of Pern"--a Judy Blume coming-of-age opera exuded out by Anne McCaffrey. It has all the feelings. Mostly feelings of martyrdom, but the noble kind that you choose to defend the honour of one of your boyfriends--the less handsome one, so there's a problem, amiright ladies? It's not about looks, though, as Mockingjay 1 takes a moment to remind when some old guy says they shouldn't put Katniss in makeup because it makes her "look 35," handily identifying exactly the demographic assembled for this film: tweens and everyone else pretending they didn't glance at J-Law's naughty selfies. Feelings of tremendous, overwhelming, Titanic-like levels of love, too, where the only way to really represent how much you love this boy (or that one--no, this one) is by standing on the corpses of your loved ones and a few thousand bystanders. It's that much love. You couldn't understand. Only my diary could understand.

See, the evil old guy president, President Snow (Donald Sutherland), hidden away in his luxury suites in the Capital, has between chapters two and chapter three-point-one (and if you don't remember what happened in the last movie, you'll never understand; you don't even care, do you? I hate you) started cracking down on dissidents in his fiefdom. Dissidents who were inspired by the drama of Katniss's emotions (Mockingjay 1 breaks it down: Katniss loves her stupid sister, burgeoning cat lady Primrose (Willow Shields); a dead little black girl, one of three dead black people so far to have sacrificed themselves for her; and Peeta (Josh Hutcherson)--no, Gale (Liam Hemsworth). Wait: Peeta, I'm sure of it) to rise up against their evil overlords in a gesture symbolic of Katniss's love conquering all. The President has captured Peeta somehow, and the opposition, led by stern President Alma Coin (Julianne Moore) and her advisor--remember this one?--Plutarch Heavensbee (Philip Seymour Hoffman), is committed to making Katniss an emblem against her wishes. Well, it's against her wishes for a while, and then it's a good idea because as a woman, you have the right to change your mind. And I hate you, I hate you! (I hate you.)

Katniss is given a camera crew and a personal image consultant, Effie Trinket (Elizabeth Banks), because in a work that uses Dickens's strategy of naming people what you think of them, there's always room for a little condescension towards the image-conscious bimbo. Later, there will be a plan to free Peeta that involves broadcasting a television signal at The Capital while the encryption system protecting the technological systems of The Capital is, just like the residents of The Capital, without power. Let's take a minute to think about this plan in detail: They're going to broadcast a television signal--to be televised, understand, to the residents of The Capital--while all of the power is out at The Capital. Probably in science-fiction land, televisions run on something other than electricity, so what could go wrong? Indeed, nothing, for as one such signal is broadcast to interrupt one of Peeta's propaganda pieces, Peeta sees Katniss is alive and well and warns the opposition of a coming attack. This is, of course, at odds with the revelation that Peeta has been conditioned to see Katniss as a fearsome threat, thus making it unlikely that Peeta would do anything other than shit himself and curl up into a ball at the sight of her, but this isn't about Peeta. Nor is this about electricity. Mockingjay 1 is about Katniss's feelings, and you'd understand that if you cared. Say what you want, but if I have to explain it to you then it doesn't mean anything anymore.

I'm sure the books make it all clear. I'm sure that Suzanne Collins's magnum opus is a stunning satire of how Wag the Dog wasn't a fiction because the media does lie to us to send us to war for its own arcane purposes. I'm sure the books are the best things ever written until I read The Bell Jar and then, holy crap. The films, however, are dour and self-abnegating, with this one being the most gravid, self-serious of them all, comprising long, long passages in underlit sets interrupted by one sort-of action scene and this one part where an idiot almost kills three people because she wants to save her cat. Later, the cat acts as a metaphor for one of Katniss's diary-entry epiphanies, so I guess it makes sense from a dramatic standpoint. Mockingjay 1 feels endless, indulging in the waking-from-a-nightmare-into-another-nightmare thing and allowing Katniss to brood, mope, sulk, and, just for flavour, pout. She cries a lot, sobs sometimes, gleams wetly at others. She leads Gale on, but loves him, she isn't sure, but she loves Peeta--are you happy now, President Old Guy? Isn't that what you wanted? I hate you. The late Hoffman is wonderful cashing a check, and Moore, great as a revolutionary, made me want to watch Children of Men again. There's a moment where an aerial raid is shot just like that old stand-up arcade game Xevious, which got me interested for twenty whole seconds of thinking back on my youth. I also liked a bit where Katniss sings a song about a hangman, because it's the one time the damned thing feels like a movie and not like an adaptation of a book about a teenage girl navigating the seas of her rising estral tides. Vive la révolution!