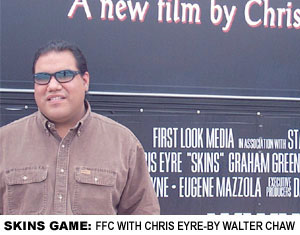 October 2, 2002|Striking a chord with his first film Smoke Signals (based on a collection of short stories by Sherman Alexie, who himself makes his directorial debut this year with The Business of Fancydancing), director Chris Eyre is now on the "Rolling Rez Tour" with his second film, Skins, traveling across the country in a giant semi-trailer equipped with, of all things, a 35mm projector and comfortable, air-conditioned stadium seating for ninety. There's even a popcorn machine.

Premiering with a splash at the 2002 Sundance Film Festival, Skins chronicles the hardships of life on the Ogala Sioux Indian reservation at the site of the Wounded Knee massacre in South Dakota--no film prior to Skins had been shot there due to a lack of housing and the remoteness of the location.

Eyre is a bear of a man and a tireless promoter of self-assuredness. His long hair tied back in a ponytail, his voice laconic and passionate, if a little hoarse from an afternoon of doing interviews at the Denver Indian Center with the Skins truck idling in the parking lot, after a nice bowl of hominy and beef stew served by what appeared to be three generations of one family in the centre's commissary, Eyre was ready to talk with me about the perception of American Indians in the United States and more.

CHRIS EYRE: (laughs) Um, well, I was in New Mexico about a month ago and I was doing a little presentation with a friend of mine on stage and I was talking about how the John Ford/John Wayne movies were detrimental to the Indian, probably second only to religion, and a lady stood up and said, "I don't think you're giving those movies any credit, it was those kind of movies that made me want to be an Indian when I was a little girl." From the plains or a horse culture, of course, and my friend turned to her and said, "If you wanna be an Indian, I've got some SPAM and crackers in my trunk." So I think there's a huge disparity between taking bits and pieces of what you want to see and the reality of the whole--you have to be mature enough to embrace the whole and the romanticizing of the plains and horse cultures is hurtful not only without but within the Indian community.

There's so much misinformation that non-Indians have about who Indians are--I mean, I read a review of Skins where the reviewer said, "After watching Chris Eyre's Skins you'd wonder why any Indian would want to live on a reservation despite its tax advantages," and I can't even tell you how misinformed that is. Number one that there are any tax advantages of living on a Rez, and number two that he doesn't see the love and the spirit, the innate human things, of life there and anywhere. There's nothing wrong with honouring, but I think we've existed too long as Hollywood Indians. I mean, Skins is the most realistic Indian movie ever made and I can say that because it's true.

FILM FREAK CENTRAL: That's your role as a Native American filmmaker?
It shouldn't be novel that my characters are human beings--that's the dumb thing about it is that I'm not doing anything unique other than respecting my characters. I think Indians are the most exploited cultural icon in this country--words like "Manhattan" or "Minnesota" or the mascots, or the histories we've romanticized, just based on populace alone, I mean, we're maybe two-thirds of one percent of the population in the United States. I just want people to know real Indians, not the romanticized icons of them.

Speaking as an Asian-American, I very seldom have seen Asians treated as characters with depth and human emotion--showing the dark side with the light is the only way to truly honour a character.
That's true, that's true. I wake up and I say what the hell is going on here, after the boom in the eighties and nineties...and I believe in capitalism. My movie is the most patriotic movie that I'll probably ever make because it's about the right to improve yourself, the right to dialogue and saying that there's a need here that we need to address and that need has been around for one-hundred-and-fifty years. Every administration since Lincoln has had to deal with "Indian Country" and no administration has figured out how to do it and as we run around the world as the world's humanitarians, I find that to be a hypocrisy because we don't even own our own history. I really want at some point to see a definitive figurehead in this country speak to truth, to reality.

Are you talking about a policy of guilt?
I'm not about guilt, I'm making movies about truth. I'm not pointing out bad people in my movies, I want to make movies that are about the spirit of sustaining my own race of people.

Did you ever experience a divorce from your Cheyenne/Arapahoe roots?
Oh yeah, I mean I've lived different cycles like most. I was adopted and always told I was Cheyenne/Arapahoe. Being adopted into a white family and not being told you're different is an impossibility, y'know, but I didn't really understand what it meant to be Cheyenne/Arapahoe until I got older. I had to keep the faith--I'm an amalgamation of two worlds and I think looking at two sides of things that I can't separate has given me that sensibility called "humanity." It transcends culture and race, in the end what you're left with is Skins or Smoke Signals.

I always knew what I was, but I never knew what that I meant. As a child one lady came up to me and told me, "You need to go home." And I think about that now and twenty years later I understand what she was saying.

Why did you seek out your biological family?
It's something I just knew I was going to do--it created a deep faith in love that was out there that was mine. I had love out there but I didn't know where it was and I think in my movies what's happening is these characters are yearning for each other--they're home dramas, and ultimately I want my audience not to miss each other. You look at 9/11 and the worst part of that tragedy is the children that don't know why it is that they don't have a right to their mothers or fathers and that's the tragedy that my movies are about. I knew I might never meet my mother, and as fate had it she was in good health, but it was possible I'd never have the ability to reconcile with my birth culture. The idea of bridging cultures and stuff, in my movies I'm trying to convince my audiences to, y'know, go home.

Who's your audience?
Well, listen, I'm raw--I'm interested in saying something. My movie is like me, I believe that stories can change the world and they're not just about entertaining. Skins is entertaining, but you sell the medium short when you don't nourish the soul. I'm sent scripts all the time and I think, "I don't care, somebody else needs to make that movie."

Changing gears, tell me what Mt. Rushmore and Wounded Knee mean to you personally.
(laughs) Let's see here. (long pause) One of them means pride. And one of them means hypocrisy--I won't tell you which is which.

Some of the images in your film might be seen in the light of 9/11 as terroristic and disturbing.
Which ones?

The defacing of a national monument for one.
I think this is a very patriotic movie because it makes a mockery of the patriotism that's found waving a flag on your front porch in middle America. That's fine, but I think I'm too young for that kind of patriotism. What Rudy does as the trickster in my movie is offer social commentary in an effort to improve who we are as Americans. If people are threatened by the gesture, I think it says more about the person than the movie. Rudy is shaming us as Americans and if we can't take constructive criticism from our own people then we don't live in a democracy and I think it's a voice that's been unheard in cinema. I find it very patriotic--it's an exercise of our rights to improve our condition and that exercise is rooted in dialogue and experience.

Tell me about Skinwalkers with Adam Beach.
I did that movie last spring. There are two kinds of Indian movies: there's the romance, which is how America wants its Indians, and there's stuff like Skins and Smoke Signals, which are about a voice. I'm not always gonna make those movies, I'm gonna make broader movies sometimes, but I think Skins is a more bold movie. It was fast and fun working with a big budget, though, and working with Redford who actually was the one who advocated working with me on that movie. It was a good experience and I've learned so much from Redford as a filmmaker. It's a television movie that premieres November 24th. I'll be starting a movie called Shiprock next, it's about a black coach played by James McDaniels who goes to the Navajo reservation to coach a girl's basketball team.

How's the Leonard Peltier story coming?
I'm still working on it. Leonard's story is the most important Indian story of the twentieth century because Leonard knows that it's about the continuing dysfunctional relationship between Indians and the white culture. It's about this man caught up in a wheel and becomes a focal point--he's the most important Indian figure of the twentieth century not for what he did, but for what happened to him. I don't know another who's summed up the Indian experience as well as he did--embodied the continuing struggle. It's not my struggle, but it could have been my struggle.

Is Leonard keeping his sense of humour?
Oh hell yeah, (laughs) he's teasin' ya. The best thing about him is his sense of humour. People say they don't know when I'm teasin' or not, but I don't even know when Leonard's teasing. You know his heart is always in a good place and when he says something a little strange you know he must be screwin' with you a little.