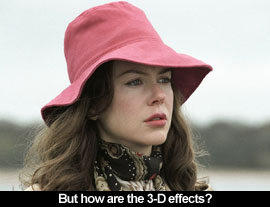 by Walter Chaw As a big fan of Noah Baumbach's Kicking and Screaming and The Squid and the Whale, I find myself jarred by his Rohmer-shrine Margot at the Wedding--not so much by its prickliness, but by how much that prickliness brings into harsh relief the clothed knife-blades in his previous work. It's easy to forget the young son in Squid telling his mother that she's ugly; I wonder if it isn't the lightness that tempers his first two pictures that's led Baumbach to craft a film full of the kind of stuff that elicits only the blackest laughter. There aren't any safety nets in Margot at the Wedding: though structurally (and a character's named "Pauline" to boot) it's Rohmer, in execution it's more than a bit Fassbinder, which is to say that it's a comedy of manners written with mean, acerbic precision, excoriating the educated bourgeois as intellectual leather freaks--sadomasochism as withering remarks and arch ripostes, a Dorothy Parker poem come to life. The Margot of the title, as played to alien, frostbitten perfection by Nicole Kidman, is a NEW YORKER contributor (and Jennifer Jason Leigh, as Margot's sister Pauline, played Mrs. Parker herself once upon a time) who's ventured out to wintry Long Island to talk her sister out of marrying schlub Malcolm (Jack Black). A tree growing onto the property of their bestial neighbours gives the film its trope and underclass antagonist, but Margot at the Wedding isn't a satire of the gulf that divides the intelligentsia from the unwashed so much it's as an observation that psychological pissing contests are pissing contests by any other name. The interludes in the picture are moments where Margot's boy Claude (Zane Pais) and eventually Margot herself peep on a couple engaged in mysterious carnal rites--sex of some sort, the dressing of a pig--that speaks to the idea that these hyper-educated people are divorced entire from their physical and native moral intelligence.

Though a scene where Margot eviscerates Claude by describing him as having lost the grace of his childhood (a form of retaliation for some imagined offense) is destined to become the centrepiece, a vignette at a book reading where author/lover Dick Koosman (Ciarán Hinds) tries to get Margot to make the connection between a fictional abusive father in one of her stories to her own persona and relationship with her child is the sort of high-wire brinkmanship that defines Kidman's indie pedigree. Margot at the Wedding is an essay on how a life examined can often be a life of critical obscenity: an ill-begotten thing (Promethean fire, Frankenstein's monster) created unnaturally and sustained by keeping others at arm's length. It's Prufrock's lament as the only filter by which life can be assimilated: the contemplation of the peach, not the eating of it. It's an interesting film made (maybe a film that could only be made) by the son of two film critics. There is such a thing as forgetting about the thing in too drawn-out a discussion of its "thingness."

A picture like this lives and dies by its cast, and while it's easy to target Black as the odd man out in this ensemble, better to forgive the Malcolm character as an example of the frustrated intellectual, straitjacketed by potential and the belief that he was bound for something better promised him by people (parents?) also frustrated by the golden dream of being super. In Baumbach's universe, there's a real savagery to the accumulation of knowledge--the idea that the more you have, the more you realize you lack and could never hope to attain. The taint is of the jealousy of unknowable bliss compounded by the suspicion that bliss was only ever a lie. More German New Wave than French, Margot at the Wedding is very much a film of 2007, looking for succour in undiscovered countries of the unrecoverable, mythological past. When Margot is goaded into climbing that tree (suspected to be rotting, the tree doctor gives it a clean bill of health), which stands as sentinel between the childhoods better remembered and the present better forgotten, and finds herself stuck there with a bug crawling into her ear, there is, stark and indelible, the feeling that we've come somewhere in our process of grief--past vengeance, into despair, no looking back.

Tamara Jenkins dubs her own hyphenate intelligentsia yawp The Savages, casting Baumbach's Squid mom Laura Linney as Wendy Savage, a temp and frustrated writer submitting as the film opens her grant proposal for a new play about a dysfunctional family to various endowments. Acidic, bitter, embroiled in an affair with a married nebbish, she receives word that her elderly father (Philip Bosco) has begun to show signs of advanced dementia and that she needs to, with her drama professor brother Jon (Philip Seymour Hoffman), put him in a retirement home for his last days. A broken family, a reunion, a collection of super-educated, passive-aggressive manic-depressives--The Savages is not at all unlike Baumbach's Margot at the Wedding in many respects. The place where it deviates most starkly is that The Savages lets its audience off the hook by allowing pressure valves for its escalating conflagrations. The Savages are immanently likeable, Margot is barely human; where The Savages is a black comedy, Margot at the Wedding is a massacre. I do wonder about the humour inherent in an old broad dropping dead while getting her nails done, or the pathos of a nursing home screening of The Jazz Singer that results in the predictable disapproval of this film's plebeians (blacks) at that film's blackface performances--yet for every comedic situation that's beneath them, there are several more of Linney and Hoffman knocking a line delivery out of the park. I love their work in this picture--she of the secrets and the furtive looks and the crushing disappointments, he of the sublimated humiliations and lumpen resolve and the potential over all for volcanic dissertations. Not enough that his Jon is working on a book on Brecht, however: The Savages is the type of film that spends a long time explaining who Brecht is and then that much more time paralleling the social formalism of the playwright with Wendy's need to have her father in a hospice with better landscaping. News of the father's passing even comes during one of Jon's blackboard lectures.

The Savages only avoids heartfelt pap because Hoffman's and Linney's mutual lack of self-consciousness counteracts the film's surplus of the same. If Margot at the Wedding is a throwback to the forced naturalism of the early 1970s arthouse, The Savages is a throwback to the family dysfunctions of early Sundance. Its polish is comforting and deflating, exorcising itself as it unfolds; a moment where Jon defines the ugliness of dying to his sister before realizing that he has an audience isn't awful as it ought to be, but rather a wah-wah rim-shot. It feels like a mollycoddle of big issues, brave enough to broach uncomfortable topics but not quite brave enough to allow its actors to navigate the human complexities of their impossible situation. Slotted to become this year's Little Miss Sunshine, it shares that picture's broadness, occasional cleverness, and collection of fine performances dedicated to an endeavour that doesn't entirely deserve the talent assembled to bring it to life. As it is, The Savages is a fine middlebrow addition to the end-of-year sweepstakes, as good as expected, as bad as feared, and gone without a ripple to make way for the thorny stuff. Originally published: November 30, 2007.