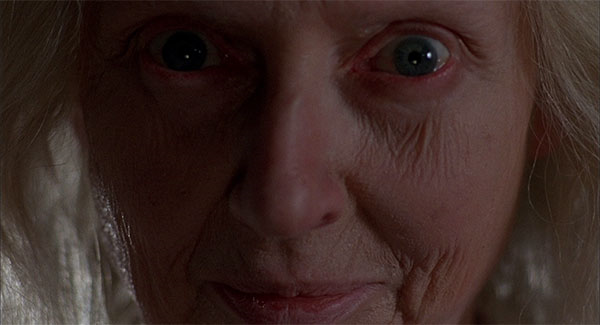 by Bryant Frazer A cross between "Hansel and Gretel" and The Old Dark House, Dolls is director Stuart Gordon's idea of a family-friendly horror movie. That is, it puts a little girl in peril from square one and admires her serenity and good-heartedness in the face of danger all around. The dark house belongs to the Hartwickes, an adorable elderly couple with an extensive collection of murderously ambulatory dolls. The little girl is 7-year-old Judy Bower (Carrie Lorraine), and the peril comes not from the old folks or their killer figurines but from her lousy parents--a loveless father and stepmother who have brought her on vacation only because joint custody keeps the child-support payments low. Joining the unhappy family at Hartwicke Manor on a dark and stormy night are fellow travellers-in-refuge Ralph (Stephen Lee), an earnest but overgrown man-child, and Isabel (Bunty Bailey, best-known from A-Ha's "Take on Me" music video) and Enid (Cassie Stuart), the shifty rocker-girl hitchhikers he picked up. Naturally, the guests start to disappear one by one. Who will be left at the end of the night?

As you might expect from a movie that namechecks both The Brothers Grimm and Bruno Bettelheim in the end credits, Dolls has a moral dimension inspired by fairy tales--bad things happen to bad people. Fortunately, Gordon has gathered the sort of ensemble that delights in portraying everyday malice. Ian Patrick Williams plays the bland dad with a despicable yet pathetic mean streak. His wife (Carolyn Purdy-Gordon) gives the unloving stepmom a chilly imperiousness borrowed from Cruella DeVille. Isabel is a Madonna wannabe with sticky fingers and a Cockney accent. As the Hartwickes, the marvellous Guy Rolfe and Hilary Mason function mostly as masters of ceremony rather than participants in the mayhem. The Hartwickes are the heavies of the piece, but they register quiet disappointment with their guests as opposed to vengefulness.

Shot quickly (and, one suspects, quite cheaply) in a couple of weeks before production began on Gordon's From Beyond, Dolls didn't actually see release until after that movie came out, since the doll effects--a combination of puppetry and stop-motion animation--required an enormous effort in post-production. But the broad performances are of a piece with those in Gordon's previous film, Re-Animator, and despite the absence of a genuine scene-stealer like Jeffrey Combs, Dolls turns out to be a surprisingly satisfying change of pace from the Lovecraftian shenanigans that sandwich it. Working as a hired gun (the script had already been written by Ed Naha, based on a poster concept by Empire Pictures impresario Charles Band), Gordon brought his characteristic lightness to the script, approaching out-and-out horror comedy with a soupçon of real nastiness lurking under the surface.

The cinematography by Mac Ahlberg, a veteran of 1980s genre movies (Parasite 3D, House), is better than it needs to be, ably lighting up the actors while keeping the backgrounds appropriately shadowed. And while the overall one-murder-after-another structure may seem overly familiar, the particulars are inventive. Clever visual jokes, such as a scene with an oversized teddy bear and a bit of business involving a body bleeding through a bedsheet, are staged to be at once grisly and grin-inducing. The animated doll attacks don't look realistic, exactly, but they're sparingly intercut with live-action footage, while the dolls themselves have a consistently handmade quality that helps sell the illusion. And though the film is patterned on fairy tales and features an adorable moppet as quasi-protagonist, Gordon is not going for a PG-13; the gore quotient isn't over the top, but there's ample squickiness on screen, including biting, sawing, blunt-force trauma, and squibs filled with stage blood. By the time a fatally frustrated Williams resorts to his climactic yawp of "Fuck you, clownie!" Dolls has earned the right to go for the cheap laugh that line delivers.

It's easy to imagine how a more expensive production could have made something grander and creepier out of the movie's thriftily-staged tableaux--especially the final shape-shifting climax, a lamely underpowered American Werewolf in London knock-off. Yet in comparison to later, backstory-driven variations on the same theme (namely the self-regarding Child's Play, released the following year, and Band's own long-running Puppet Master series), the modesty of Gordon's film works to its advantage, highlighting the simple pleasure of a story that doesn't just wallow in visions of childhood trauma, but also promises recovery, eventually positing a life lived happily ever after, after all. 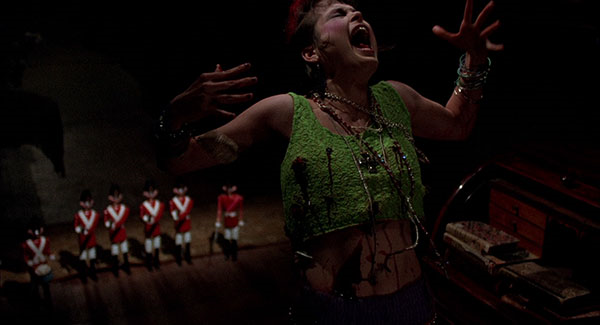 THE BLU-RAY DISC
Scream Factory's new Blu-ray Disc is of a pretty high calibre. It's a cliché to say that something on Blu-ray has "never looked better," though that's a useful metric, and it's a safe bet that 35mm prints of Dolls were never as crisp as this HD transfer. (Presumably the puppet strings we glimpse here were not apparent on release prints.) Letterboxed to 1.85:1, the image twinkles with an organic-looking layer of film grain, and some black-and-white dust and dirt specks are visible (especially in the occasional optical process shots, marred by sporadic vertical scratches). You'll see some reviewers complain about this, though I much prefer limited speckling to the alternative, which is too often a picture scrubbed of detail by automated noise-reduction techniques so that it no longer resembles film at all. Happily, Dolls looks like film. The average video bitrate is a generous 38 Mbps, with little variance from shot to shot. Colours are rich but not overly saturated, and shadows are dark but without the sense that detail is being crushed in the toe of the image. Although highlights are sometimes clipped as bright lights strobe into the frame to simulate lightning, that appears to be the intended effect.

Dolls offers a pair of DTS-HD MA tracks in either 5.1 or 2.0 configurations. I assume the 2.0 version reproduces the theatrical Ultra Stereo mix, and it unfolds respectably into the surrounds, which are used to add oomph to the score and ambient effects. Clarity and dynamic range are strong enough to reveal various limitations in the original dialogue recordings, here sometimes panned, distractingly, into the left and right front channels instead of fixed in the centre speaker. In comparison to the 5.1 remix, I found the 2.0 option to have a much smoother and less fatiguing sound overall despite less action in the surrounds.

Extras are exactly as fans have come to expect from Scream Factory. Dolls gets two feature-length commentaries, one with Gordon and Naha, the other with actors Purdy-Gordon, Lorraine, Williams, and the late Lee, who died in August of this year. The Gordon-Naha affair starts off well but too often trails off into dead air as the thing progresses; subjects covered include pre-production and production topics (Gordon was already shooting From Beyond during the editing of Dolls, so he doesn't have a lot to say about post), scene-specific anecdotes, and some notes on story and character. The conversation with the four actors starts off well enough--and benefits from Lorraine's eagerness to share her experiences as a child actress--but they, too, become a little sleepy before the movie's over. A single yakker editing together the best of both sessions would have been the kind way to go.

The 38-minute clips-and-talking-heads doc, "Toys of Terror: The Making of Dolls", is a fairly sedate outing, although it does provide the usual complement of production anecdotes. Covering much of the same ground as the two commentary tracks but with even more participants weighing in, the piece counts among its interviewees Gordon, Band, Naha, Purdy-Gordon, producer Brian Yuzna, and a trio of make-up effects artists: Gino Crognale, John Vulich, and Gabe Bartalos. Most enthusiastic are the make-up guys, who remember that, at one point, they were given marching orders and then left to their own devices to create some of the wilder creature effects. (Yuzna says he was worried about what he described as "the lack of horror stuff" in the film and asked them to add the creature angle as an afterthought.)

We also get an eight-minute storyboard-to-film comparison that covers three scenes from Dolls, including the FX-laden climax, and proves Gordon carefully plans his visuals in pre-production. A two-and-a-half-minute trailer, presented in a soft HD transfer, edits most of the money shots into a rapid-fire sales piece that would be wrapped in a red band if it played theatres, and finally a stills gallery collects a few pieces of key art and dozens of production stills into a slideshow that will be mildly diverting for fans of the film. Also on board are trailers for separate Scream Factory releases Phantom of the Paradise, Sleepaway Camp, and Pumpkinhead. 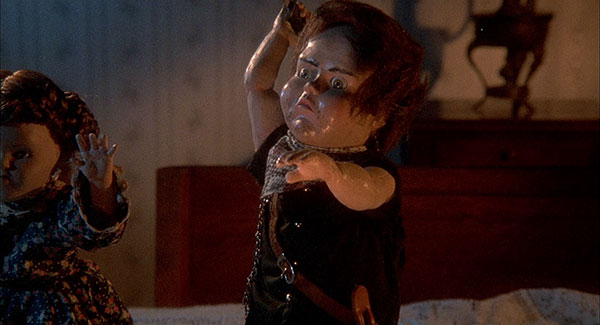