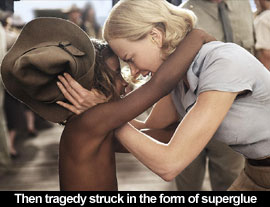 by Walter Chaw Baz Luhrmann's Titanic begins--as you know that it must--with fusty, dusty-britches Mrs. Sarah Ashley (Nicole Kidman) tumbling out of a plane into the wilds of WWII Australia and the brawny arms of fair dinkum frontiersman The Drover (Hugh Jackman). They hate each other--she his disgustingly rugged physique and brusque manner, he her high-falutin' snobbery and belief that all men want to shag her. How miraculous, then, that the two come to love one another before the one-hour mark of the longest two weeks you'll spend in a theatre this year. But first, in a nod to Australia's "Lost Generation," of course, but more directly in most viewers' minds to Rabbit-Proof Fence, introduce pint-sized product of settler/aboriginal miscegenation Nullah (Brandon Walters), who lives on Sarah's late husband's cattle farm. Nullah is the emotional glue of the film (besides more importantly being the one who brings the cast's collective age down from AARP levels), the character imperilled, monumentalized, sought after, lost, recovered, hugged over, longed over, kissed over, and, in a stupid film's deeply stupid end titles, patronized with trivia about how the POME government at last apologized to the Aborigine people for their policy of forced intermarriage. How this saccharine, torpid love saga ends as a bromide is one of those things only the genuinely gifted can achieve: set in Darwin, Australia earns a Darwin Award for its dedication to self-destruction.

The first half is a Red River cattle drive as plucky Sarah and burly The Drover do their best to move their herd to a wharf across the country, finding along the way a Billy Zane in Fletcher (David Wenham), henchman of a cattle baron, King Carney (Bryan Brown), whose villainy knows no bounds. (Every character is burdened by his/her tunnel-visioned, one-dimensional direction and flat trajectory despite Australia's distended runtime of 155 minutes.) Fans of this kind of drivel will revel in the obligatory black-tie ball where the bluebloods turn up their noses at Sarah's courtship of The Drover (and, later, at Sarah's love for "creamy" Nullah), the heroic sacrifice, the tear-stained reunion, and the bittersweet nod to racial sensitivity that is, at the end, actually racist. To say that the landscape is beautiful is one of those non-criticisms that invites one to also consider a Rick Steves video high narrative art. It is, rather, in every way exactly like Titanic: it looks the same in its bloated artificiality and self-knowing "Old Hollywood" scale and it sounds the same with a screenplay composed of awkward dialogue and, because it's a Luhrmann flick, peppered with people screaming directly into the camera. It makes one wonder if this film would've found an audience ten years ago, when CGI trickery was changing our ability to perceptually engage in this, the essential collective artform of the twentieth century--as opposed to now, when stuff like a herd of steer apparently mystically controlled by the super-duper magic Negro turns away from its doom. Take heart that with a finale unfolding amid the Japanese bombing of Darwin (immediately after their attack on Pearl Harbor) that Australia, in also reminding of Michael Bay's own Titanic, Pearl Harbor, has a shot at that "instant camp classic" ring.

Although highly unconvincing emotionally, Luhrmann's Romeo + Juliet and Moulin Rouge! (give this to Australia, that it at least doesn't have a punctuation mark in its title) buy themselves a lot of grace through the obvious hotness between their leads. Australia's headlining couple can't even muster a sizzle--the centrepiece smooch in the pouring rain with The Wizard of Oz playing on an outdoor screen (yes, really) is curiously flaccid. Jackman's almost the definition of virile in his role, but Kidman demonstrates yet again her inability to anchor the "big" picture. She's marvellous in smaller films, where her choices have proven to be leagues better as well; put her in the middle of a big budget and her range shrinks in direct, inverse proportion. What's of interest again as it has been repeatedly, ad nauseam, in the films of 2008 is the spectre of miscegenation raising its café au lait head over the proceedings and seeming to, in hindsight, predict the election of Barack Obama to the position of most powerful person in the free world. But that's the end of it: there's nothing more complicated about Australia's position on race relations than bigotry is bad and paternalism is good--and maybe not even that so much as 'Australia's policy on aboriginal children of mixed race bad' and 'not separating children from their mothers to train them for domestic service good.' In the absence of controversy and spark, it's a pretty tall order to ask an audience to sit through two-and-a-half hours for just a few pretty things to look at. Originally published: November 26, 2008.