Fantastic Fest 14: The World of Kanako 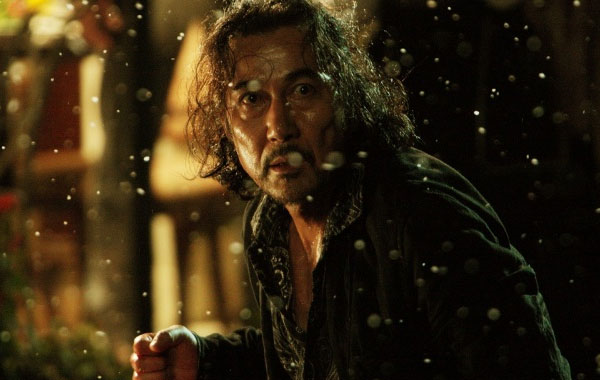 by Walter Chaw Takashi Miike's Natural Born Killers, essentially, with a bit of the old Park Chan-wook ultra-violence (or is it Shohei Imamura's A Clockwork Orange? Tarantino's Hardcore?); I'm finding it next to impossible to talk about Tetsuya Nakashima's The World of Kanako free of larger contexts, and its short-circuiting of my hard drive is perhaps intentional. The film is extremely stylish, distractingly so--or it would be if not for a central, anchoring performance from Koji Yakusho as disgraced detective Akikazu Fujishima, demolished by a long drunk and roused back to furious, ugly action by the disappearance of his daughter, Kanako (Nana Komatsu). Yakusho is so good, so grounded in his self- destruction and loathing, so extraordinary, really, from calamity to atrocity to spurious bloodletting, that watching him in this Grand Guignol is something like a true privilege. He's manifested possibly the most disgusting hero in the history of such things (Mickey Rourke's Harry Angel? Eagle scout), a creature of this dank, abattoir noir who gets progressively filthier, baser, as the picture unravels. His performance, not to gild the lily, is fucking genius.

In his search for Kanako, Akikazu murders, disfigures, and rapes (yes, violently rapes) innocents and miscreants with little discrimination. The World of Kanako tells his tale with extraordinary energy, interweaving the present with a story set three years prior that shows exactly how not-innocent Kanako was; how the sins of the father have very clearly metastasized into the sins of the daughter. They're parallel protagonists of like-minded sociopathology in one of those legendarily perverse films that, although you love it, there are only ever a handful of people in the world to whom you can recommend it. It's like Kim Jee-woon's I Saw the Devil in that way--Yakusho even looks a great deal like Choi Min-sik, though the character he plays here is both avenging angel and serial killer. The World of Kanako's conclusion, protracted in a frozen wasteland that adds intravenous drug use to Akikazu's curriculum vitae, harks back to something like Fargo. And while all this trainspotting suggests the picture is something less than original, I'd counter that my inability to nail it precisely bespeaks to its slipperiness--and its pleasure principle.

Have I mentioned the soundtrack? All of soul classics, Dean Martin, versions of "House of the Rising Sun", and the stray J-pop confection, it's one for the ages. Cool, in other words, extremely cool. In a scene where a man addresses his bound, gagged, and recently-assaulted wife, in which he asks her forgiveness for some infidelity before freeing her, Nakashima even betrays something like a sense of humour. I'll cop to a hearty laugh at one instance of car violence, too, that's over-the-top and then paid off so well that it would be wrong not to appreciate it. I love the use of animated cutaways, not the least the movie's title cards, which holler back to masterpieces of the Japanese New Wave. I love a running gun battle on a street that innovates that kind of violence in not just choreography, but also a certain circular pan that recalls, what the hell, Michael Mann. John Woo as well. Then there's that moment that's a direct reference to Suspiria, when Akikazu walks through a garishly-lit puddle reflecting a building-front. I want to show this movie to everyone, but it's perverse and unpleasant enough that I'm not sure I can watch it again. Well, maybe just once more.