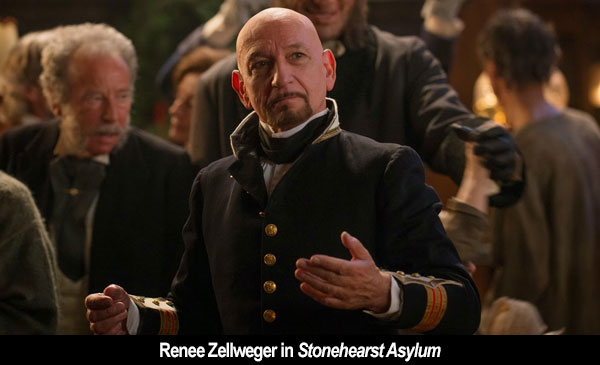 by Walter Chaw Brad Anderson has made a few interesting movies that seem to be more interesting to other people. I like Session 9 well enough, The Machinist is fine, Transsiberian's fine; they're all fine. His latest, Stonehearst Asylum, based on a short story by Edgar Allan Poe that's been adapted a couple of times already, is fine, too, I guess. It's the literalization of inmates running the asylum, following young Dr. Newgate (Jim Sturgess) as he travels to the titular nuthatch to begin his tutelage under good Dr. Lamb (Sir Ben Kingsley), who has some pretty unconventional ideas about how the best way to treat psychotics and the like is to not treat them at all. Also, there's a beautiful noblewoman with people-touching-her issues named Eliza (Kate Beckinsale), after whom the European version of this film is still named, which says something about what distributors think audiences will tolerate in our respective markets, methinks.

The rest of it is the "Masterpiece Theatre" variety of ham period performances in handsome trappings but enervating, so very enervating. Stonehearst Asylum is injured most, I think, by over-familiarity with the genre. (How surprising does something need to be in our post-Shutter Island state to be surprising in an asylum movie nowadays?) Anderson has made a career out of and earned admirers for tackling genre subjects with his brown colour palettes and ensemble casts of hale UK actors. Really what he's done is create atmospheric movies that never quite deliver on their promises to be nihilistic, or brutal, or truly horrific. He's an auteur of foreplay. I don't know that he's ever finished a film by hitting one out of the park.

Because Dr. Newgate and Eliza are the two most attractive people in the piece, they fall in love. Because David Thewlis, who plays a thug named Mickey Finn, is not attractive (conventionally-speaking), he's evil. Ditto Lamb. I'm on the fence about Michael Caine--I mean, sure, when he was a younger man and all but now there's that saliva thing when...anyway. He's in this movie, too, as Dr. Salt, who, it turns out, is the real lead headshrinker, overthrown in some coup and tossed into a dungeon. Brendan Gleeson and Jason Flemyng and Sinéad Cusack and young Sophie Kennedy Clark (well on her way to being the next Mia Wasikowska, if she's not careful) are in the movie as well doing dinner-theatre Dickens. There are multiple twists in Stonehearst Asylum, scenes of Victorian torture/mental-illness treatment, and almost no energy or interest in a picture that's near totally lacking in depth or resonance. It does, however, have a lovely happy ending in which everything's tied up in a neat little bow that proves, honestly, to be the biggest disappointment of the whole damned thing: Though I'm not a huge fan of Anderson, he's never struck me as simpering.