Fantastic Fest '14: Over Your Dead Body 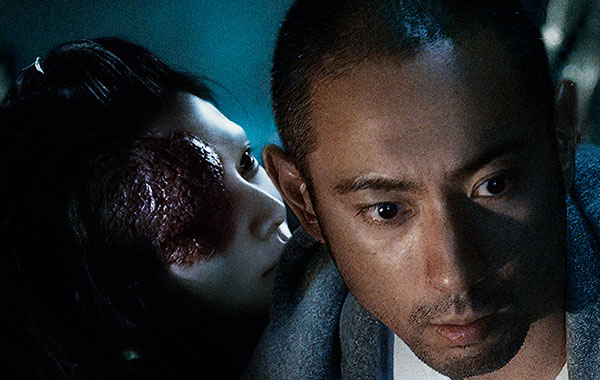 by Walter Chaw Takashi Miike's dip into formalism and tradition continues with Over Your Dead Body, a play-within-a-play conceit whereby star stage performer Miyuki (Ko Shibasaki) reprises the legendary role of Oiwa in the classic "Yotsuya Kaidan" and finds his off-stage relationship with co-star Kousuke (Ebizo Ichikawa) beginning to resemble the supernatural relational drama in which they've been cast. It's essentially the good version of Birdman, however low a bar that might be, with Miike embracing the new, languid pace of his middle-to-later career before suggesting that maybe he's ready to let a little of the ol' Gozu out again. Another Audition tale of a woman wronged, Over Your Dead Body can be read by the Miike scholar as further examination of the filmmaker's sources and inspirations while providing for the neophyte enough craft and late-in-the-game Guignol to sate most any variety of bloodlust. Yeah, it gets pretty nasty.

Though the stage sets and blocking are overwhelmingly gorgeous at times, the film suffers from attempts to drag archetype into the text, making the whole feel dangerously like a liberal-arts lecture as opposed to a living thing. While Miike's other exercises in traditional forms, 13 Assassins and Hara-kiri: Death of a Samurai, had similar build-ups and cathartic final movements, Over Your Dead Body is the first to feel didactic. The picture has an enervating airlessness; it's so single-minded, so restrained, that even the gore has about it a feeling of inevitability rather than shock. Maybe that's the point. Maybe Miike's crafted here a commentary on his own work, or on a two-hundred-year-old Japanese play that's already received over thirty screen adaptations, or on the audience's expectations and the zero-sum game of honouring them. Maybe. But given that, the effect at the end is that the film is more textbook than script, seemingly intended to instruct instead of compel.

Over Your Dead Body reminds a great deal of Takeshi Kitano's Dolls as a work in a reliably-brilliant director's evolution that finally pushes said director over from exciting into a little tedious. Both are formal exercises requiring some knowledge and experience with a very specific aspect of Japanese culture to fully appreciate; both represent moments of crisis where a revered cult director and critical darling has a choice to recover the thing he used to be, or become a footnote and an aged curiosity. Dario Argento falls into the latter camp, Francis Ford Coppola into the former. Miike, the ne plus ultra of Japanese transgressive cinema for well into two decades now, has a choice to make. He's never been a better technical filmmaker, but his boredom is starting to show, and he's taking his audience with him. It's probably just that thing where shock artists find themselves needing to one-up themselves constantly, yet no amount of his hallmark inserting-kitchen-utensils-in-unfortunate-orifices perversity can save him this time around. At least with Miike, there's guaranteed to be a short wait to see if he pulls himself out of this one-film funk.