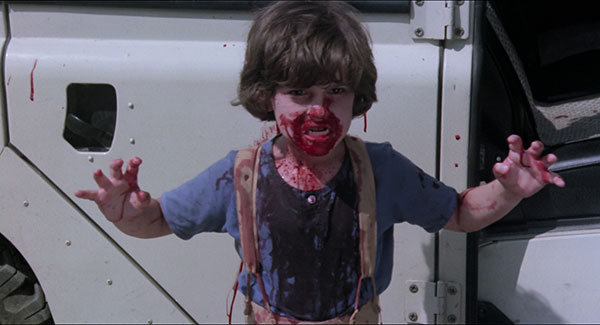 by Bryant Frazer It's quite possible there is no better-known director of truly terrible genre movies than the late Italian filmmaker Bruno Mattei. Though I've not seen any other Mattei films, I feel comfortable making that assessment based solely on the "blood-soaked double feature" assembled here by the B-movie mavens at Blue Underground. By any rational measure, Hell of the Living Dead and Rats: Night of Terror are cheesy barrel-scrapings, budget-starved and blandly offensive horror counterfeits. But by the standards of Mattei's oeuvre--which also includes nunsploitation, Nazisploitation, women-in-prison flicks, and mondo-style "documentaries"--they are the cream that rises to the top of the milk. Unless you're willing to make a case for his nunsploitation flick The Other Hell, or maybe one of the early Nazi sexploitation pictures, these two films seem to form the cornerstone of Mattei's reputation, such as it is, among genre buffs.

Probably the more famous of the pair is the third-world zombie movie Hell of the Living Dead, a.k.a. Virus, a Dawn of the Dead knock-off that goes so far as to appropriate music rock group Goblin composed for Romero's film. A framing device reveals that chemical researchers working on something called Operation Sweet Death unleashed a virus that has devastating effects on populations in the developing world. The movie proceeds to recast the tenement raid that opens Dawn of the Dead as a special-forces assault on a U.S. consulate, where a terrorist group demanding the shutdown of Operation Sweet Death has taken hostages. From there, the story moves to New Guinea and finds the same soldier unit discovering that a huge population of zombies is feeding on the natives. Hooking up with a small group of journalists, they make their way across the island and head for the research facility where the virus was originally created.

Leaving aside the Romero borrowings, Hell of the Living Dead is a depressingly poor effort. The zombie attacks are surprisingly tedious, owing partly to budget and partly to what looks to be Mattei's signature editorial style, which takes action beats and stretches them to the breaking point by cutting to leisurely reaction shots, or cross-cutting them with shots from another slow-paced action scene. Every shot is held just a little longer than it needs to be, every line of dialogue laden with a few more words than are required to get the point across, and every zombie exceptionally slow even by the lax, chill-out standards of slow-zombie movies. The unconvincing gore effects make it clear that Tom Savini was George Romero's MVP. Although this is your typical zero-budget genre hackwork, what's really nasty is the amount of mondo-style shockumentary footage--wildlife photography, native funerary rituals, skulls, skeletons and corpses--that has been dropped in to amp up the gross-out quotient. As written, Hell of the Living Dead condemns western xenophobia, but on screen it turns racist in a casually exploitative way. It's that much harder, then, to appreciate the meagre expressions of personality we do get. A zombie kindergartener has to be machine-gunned in a scene that feels genuinely transgressive (despite Romero, again, having gotten there first); the moment when trouper Margit Evelyn Newton unexpectedly and unceremoniously strips off her blouse, the better to commune with the semi-nude locals, made me a fan of hers for life; and I laughed out loud at a kind-looking grandma zombie who, after having a cat crawl out of her guts, ends up doing more effective acting with her eyebrows than anyone else manages over the course of the film. The rest is pretty dire.

More entertaining, at least, is the straight-up killer-critter feature Rats: Night of Terror, which comes on as a bargain-basement clone of John Carpenter's early career, featuring a cast of 1980s fashion victims fronted by ringers for Kurt Russell and Chuck Norris. A pre-credits scroll sets the post-apocalyptic stage for a story of survival that kicks off with the arrival of a motorcycle gang scavenging for foodstuffs at an abandoned bar and grill. In addition to Kurt and Chuck, the group of eleven includes a guy with a mohawk, a tough-looking biker chick named Chocolate, a dude in epaulettes, a pretty lady dressed up like a sexy magician's assistant at a vampire-themed burlesque show, and a few more nondescript types decked out in leather. They're not too fussed by the presence of a rodent infestation until they get the idea that the rats are deliberately, and intelligently, ganging up to pick them off one by one.

That's not a bad set-up for a ravenous-rat movie, and for a bit it feels like Mattei might just pull this one off. The cinematography by Franco Delli Colli (Visconti's The Leopard) is confident and evocative, playing light and shadow off of the faces of actors in whom he seems genuinely interested as subjects. Mattei's direction is no match for Carpenter's widescreen compositions, but some shots are a passable tribute to Carpenter's style, and the Carpenter-esque script aims to show the way that group dynamics fragment and allegiances shift under pressure. Even the gross-outs are more ambitious. Rather than relying on squibs and stage blood, the most repulsive set-piece is disturbing in its very conception, with a rat peeking out the mouth of a woman zipped up in a too-tight sleeping bag, having eaten its way into her body through a different orifice. (Ahem.) The rare presence of full-frontal male nudity opposite the requisite unclothed female body seems worthy of comment, though it doesn't absolve the picture of its casual sexism: Of the four female characters, three of them prove virtually useless when the shit goes down, and none of them are taken seriously in the world of the film. Unfortunately, Mattei's sense of pacing hasn't improved much, and Rats loses its forward momentum in the action scenes that need it the most. Moreover, the production budget simply isn't up to the task of raising a credible rodent army, and Mattei appears to be clueless about generating suspense without actually putting the threat on screen. As a result, some effects are laughably phony. (To be fair, the guinea pigs employed as rat stand-ins in most sequences are generally credible, though animal lovers will be appalled to see what they're put through.) Eventually it all becomes tedious, but the last scene is a doozy. 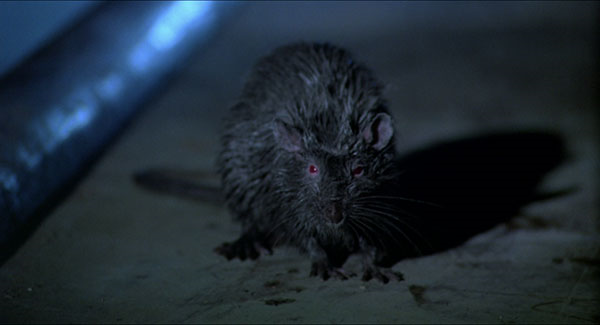 THE BLU-RAY DISC
Bruno Mattei's films are probably never going to look better than they do on this Blu-ray platter--and that's kind of a shame. While the source material is in pretty good shape, both transfers have been aggressively noise-reduced and/or degrained, robbing the image of any sort of film-like appearance, softening fine detail, and adding a distracting assortment of digital artifacts. Hell of the Living Dead fares a little better in this regard, sporting a clean and clear picture with excellent dynamic range but no texture at all. Instead of film grain, there's a vaguely blocky posterization effect to many backgrounds, and blotchy artifacts hang for several frames after the one where a bit of dirt or hair was eliminated. With its crushed blacks, waxy skin tones, and noise-reduced ghosting artifacts (painfully apparent in shots with a quickly-moving camera), Rats sadly fails to meet this low bar. I'm not too sure about its colour timing, either. Much of the film has an authentic-looking palette, but select shots sport unnaturally hot reds, and the exact shade of Ottaviano Dell'Acqua's neckerchief varies noticeably from scene to scene. Audio quality, meanwhile, is what it is. The two films sound about as good as you could expect from the original mono tracks, lovingly rendered in DTS-HD MA 2.0. (The English-language trailer for Hell of the Living Dead claims the movie was "recorded in Dolby Stereo," which, hahahahaha, no.)

Bruno Mattei died in 2007, but Blue Underground tracked him down back in 2002 for a standard-def DVD featurette running almost nine minutes, "Hell Rats of the Living Dead". Mattei cites Night of the Living Dead as the key influence on Rats, natch. He is nothing if not self-effacing, talking off the cuff about script problems, crediting Garofalo's improvisations on set, and expressing dissatisfaction with his own work. More revelatory, however, is "Bonded by Blood", a new, 50-minute HD doc that features screenwriter Claudio Fragasso, who asserts status as an uncredited co-director with Mattei. He says the director didn't like talking to the actors at all (relegating that duty to Fragasso), and claims to have been responsible for mise-en-scène in these films while Mattei concerned himself with montage. The documentary doesn't challenge this assertion on Fragasso's part, although actress Newton refers to him only as the "assistant director." She touches on what Mattei was like during production and, as you'd expect, discusses her nude scene, recalling her embarrassment at undressing for the first time in front of cameras on a film set.

Hell of the Living Dead star Franco Garofalo Skypes in an animated contribution before the doc heads to De Paolis Studios in Rome, where studio owner Daniele Taddei talks about the facility's history (Clint Eastwood, Sergio Leone, yadda yadda yadda). Then Fragasso is joined by Rats stars Ottaviano Dell'Acqua and Massimo Vanni for reminiscences. I was happy to hear Fragasso express regret for how badly those poor guinea pigs were treated, but the piece concludes with maximum pathos, as he remembers Mattei's dying moments and breaks into tears as the picture fades. It's rather well-made--a cut above what's typically created for movies of this ilk. An assortment of Italian and international trailers and fairly standard poster and still galleries for both films fill out the disc. 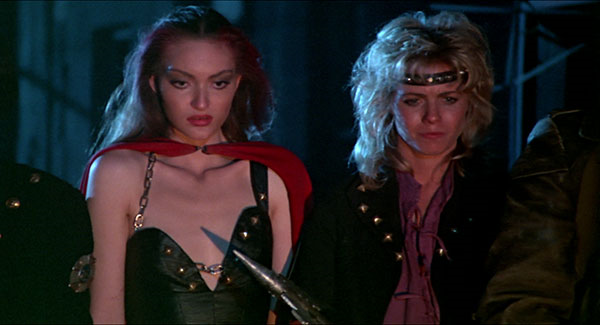