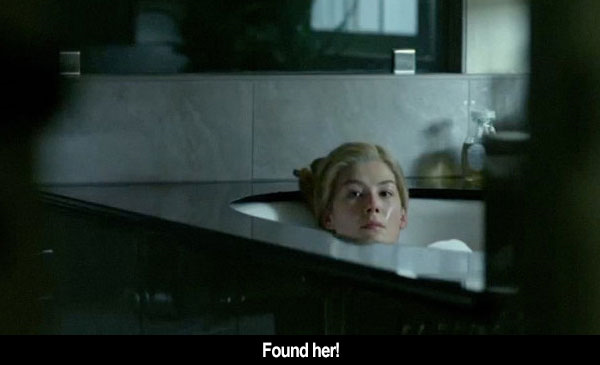 by Walter Chaw The only question David Fincher's movies try to answer is whether it's possible to do everything well (better than well, really--I mean better than anyone has ever done anything before) and still produce what is essentially a piece of shit. He's the king of garbage cinema, David Lean doing Jackie Collins for some damn reason. Sometimes he does misanthropic stuff that's transcendent (Se7en, The Social Network, The Girl with the Dragon Tattoo), and sometimes he does misanthropic stuff like Gone Girl. Don't get me wrong: for what it is, Gone Girl is a masterpiece, but its source, Gillian Flynn's ridiculously-popular potboiler, is so trashy that at some point one can't help but wonder if Fincher isn't testing himself with the weakest possible material. After tackling this and Stieg Larsson, I suspect he was in the running for, and disappointed not to get his hands on, Fifty Shades of Grey; how about this one with Fabio on the cover, Mr. Fincher? There seems no low to which Fincher wouldn't descend, and here goes your deeply, comically misanthropic proof.

Nick (Ben Affleck) is a man kept by his trust-funded wife, Amy (Rosamund Pike), co-owner with Nick's wry, Janeane Garofalo-ian sister Margo (Carrie Coon) of a bar called "The Bar." "How meta!" someone comments, and, sure, Gone Girl is the prototypical human-hating hipster model of too-smart, too-cool meta-cinema. Consider that Nick is introduced carrying a vintage "Mastermind" game his sister ("Go," he calls her, because groovy, man) immediately tosses on a pile with "Let's Make a Deal" and "Sorry!". Cut back from a diary-writing scene that's like evil Jane Austen to find Nick and Go playing...wait for it..."The Game of LIFE". "What was the point again?" he asks, and Go comments in her Sarah Vowell voice about how deep a question that is. A little surprising the screenplay wasn't written by Daniel Tosh. See? I can do it, too. Nick, for what it's worth, is maybe the Mastermind™ of a twisted game, wherein it appears to God and Det. Boney (Kim Dickens, the best thing in Gone Girl) that he's murdered his wife. Not helping is an envelope labelled "Clue™" left by the so-very-clever sociopath Amy, part of an annual scavenger hunt she sends Nick on in the world's most un-romantic tradition. Hand it to Fincher, he's created a film peopled entirely by smug lizards.

Readers of the novel were polarized by its ending because either they were the kind of person who liked how Thomas Harris's Hannibal ended or the kind of person who didn't. Those looking for a traditional notion of justice in Gone Girl should look elsewhere, but for the record, the picture appears to honour the book's ending (I haven't actually read it and never will), and it makes absolute sense to me. Gone Girl, after all, is this self-consciously withering excoriation of marriage, one which postulates that the reason marriage is a devil's compact is because everyone on the planet is soulless and compromised. It's a hopeless, bleak film played with flat conviction by square Affleck and shark-eyed blankness by shark-eyed Pike. Boney has a character arc, for what it's worth, though because this is no country for old men, her character is rendered ineffectual by the big, awful world. A few swipes are taken at the sensationalism of the media apparatus, Tyler Perry (!) turns in a career-best turn--which isn't saying much--as an unctuous Johnny Cochran star defense lawyer, and everything grinds and grinds at its petty pace for what feels like days and days.

When Fincher is good, time is like butter. When he stumbles, as he does here and in, oh Jesus, The Curious Case of Benjamin Button, it's like every one of his fabled 50+ takes has been included in the final product. By the time Neil Patrick Harris shows up as a jilted ex-lover (of Amy's), leading to an extended interlude in one of Fincher's modern, frictionless environments, I started to feel as abducted and trapped as Amy herself. Flashbacks, unreliable narrators, a mystery, a skewed morality, the fatale-ist of femmes, Gone Girl aspires to high noir but lands mostly as high melodrama. It's Douglas Sirk's Mildred Pierce, except that sounds awesome. Gone Girl is awesome, too, in the way of the world's most beautiful air bladder. Everything about it is perfect, not a hair out of place, and at the end of the day, it's just an organ for collecting nothing. I like trash, I like genre films and twisty tales like this variation on Basic Instinct (Paul Verhoeven should've directed Gone Girl as well). And I still like David Fincher a lot, even after this. He makes as much as anyone possibly could out of Gone Girl, but ultimately you could've told me that people are complicated and marriage is a lie of convenience in fewer than the four days it took Fincher. Quintessence of dust, indeed.