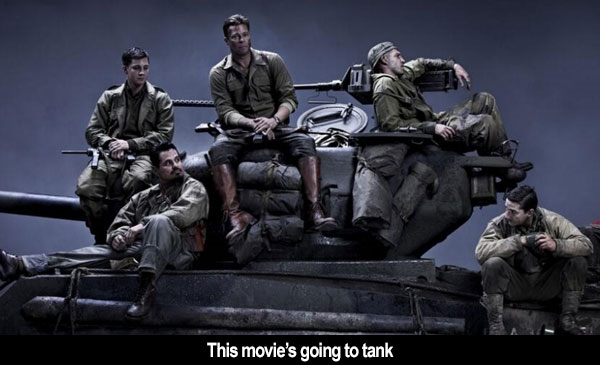 by Walter Chaw Signifying not much, David Ayer's Fury is another of his brutal excoriations/celebrations of men under pressure that people like Howard Hawks did really well because people like Howard Hawks are geniuses. It follows Wardaddy (Brad Pitt), a tank commander in the 2nd Armored Division doing mop-up duty in the heart of Nazi Germany during the first months of 1945. His motley crew of battle-hardened, psychopathic misfits is composed of backwoods inbred "Coon-Ass" (Jon Bernthal); the quietly religious one who's going to go insane, Bible (Shia LaBeouf); Mexican guy Gordo (Michael Pena); and clean-cut-rookie-whom-Wardaddy-will-take-under-his-wing-and-see-himself-in-while-they-both-learn-something-from-each-other-they-didn't-think-they-could Norman (Logan Lerman). Episodic in the way of such things, it's a story of men and war told through a series of tank battles, intra-tank squabbling, and dramatic scenes like the one where Wardaddy makes Norman kill someone in cold blood, and that other one where Wardaddy makes Norman sleep with a beautiful young fräulein they discover hiding in the rubble (Alicia von Rittberg). Woe be to any woman in an Ayers joint, however. Spoiler.

At some point, Wardaddy teaches Norman that history is clean but war is dirty, or something like that, in one of several suggestions that the screenplay was derived from that Max Fischer Vietnam play. Later, he will also tick off the "finding somewhere quiet to show vulnerability star moment" that will play as Pitt's Oscar clip, should he be nominated for essentially playing a giant testicle, wrinkles and all (spoiler). A mealtime sequence involving fried eggs and a piano is good for its tension and a moment of inexplicable character interaction that says more than all the narrated/telegraphed falderal of the rest of it. Indeed, it's almost good enough to counterbalance the part where a young SS officer demonstrates his humanity, or the "you're a hero" line (landing of course ironically, post-atrocities), or the gravid tale told to underscore the ugliness of war. The best scene in the film, though, is probably a three-on-one tank battle over open ground that reminded me a lot of that Atari 2600 game "Combat", bouncing shells and all. Cool.

At the end of the day, Fury is exactly what you think it will be and nothing more. Lerman has the wide-eyed naïf thing nailed for the TIGER BEAT Hall of Fame issue, Pitt has developed the mega-star saviour complex by playing Christ last time and another martyred (War)daddy this time, and LaBeouf steals the show simply by not being obviously unravelled. Give the picture credit for not being self-aware, but take said credit back for being boring and simpering. Honestly, the yokel didn't need a moment to express his remorse over his yokel-dom and his admiration of Norman's decency. (In a film that owes its greatest debt to Saving Private Ryan, doing the "yer a good man!" scene is its most Spielbergian moment.) The tank battles are realistic-seeming, the violence is gruesome if ineffective after a while, and it's very much like a next-gen "Call of Duty" videogame sequel with an unusually heavy-handed father/son template. Fury is Casualties of War with cheery moments of uplift; sufficed to say that Pitt is no Penn, Lerman is no Michael J. Fox, and murdering a town full of Nazis isn't abducting and raping an innocent villager. What I'm saying is that despite its gore and explosions, Fury is not just tame but a bit of a misfire as well. The jokes write themselves.