Fantastic Fest '14: From the Dark 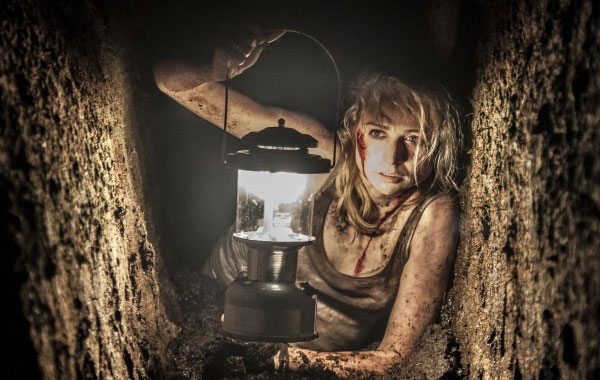 by Walter Chaw Conor McMahan's From the Dark is a hell of a film. Sarah (Niamh Algar) and Mark (Stephen Cromwell) are taking a little detour into the moors when they're predictably bogged down as night approaches. What they don't know is that a peat farmer has just been summarily attacked in a stagnant pool after unearthing what appears to be some sort of bog mummy earlier in the day. It's a nifty set-up for a spam-in-a-cabin scenario, and indeed, Mark discovers a ramshackle farmhouse where he and Sarah decide to spend the night--especially once they're attacked by some unseen thing apparently repulsed by light of any kind. It's an amalgam, in other words, of The Descent and Nosferatu: a horror film resting on those genre pillars of transgression, transformation, and contagion that cannily milks every possible light source in its rural environment (cell phones, an old tube television...more would be telling) for surprise and plot points.

There's not much more than that going on, really, except that in the first act there's a squabble about why it is that Mark won't propose to Sarah. It reminds in its way of the conversation about abuse the siblings have at the start of Jeepers Creepers--a bit of genuine character development that drives the rest of the picture. Sarah makes a discovery later on (the same one that lands Marcus Nispel's The Texas Chainsaw Massacre), and the scene immediately following involving a series of lights in a barn is not only reminiscent of Peter Weir's Witness in setting, but in its extreme melancholia as well. Mark's willing to commit to eternity to Sarah, after all, and the black irony of the picture is that he's willing to do it come death or high water. For her part, Sarah is a ferocious "final girl"--the prime mover of the piece, the guardian; in the end, when she's injured, it's not an accident, I think, that it's her ring finger that's bloodied and broken.

From the Dark, then, in addition to being a fantastic genre piece, tight and contained, is also about issues like commitment, love, fidelity. It conceives a brilliant monster, crafts a smart scenario, and then offers up a character worth rooting for in Sarah, the best creation of her kind since Ripley: resourceful but vulnerable, a feminine badass. I'd like From the Dark even without its final shot, but its final shot is so fantastically ambiguous that I love From the Dark. There is about it an air of Romanticism lingering just beneath the kineticism. The movie's premise is primal: the fear of the dark versus the absolute necessity of light as protection from not just evil made flesh, but philosophical evils, too--mythologies and beliefs and certain quailings of spirit made silly by any illumination. There's a lot going on here, though none of it overwhelms an economical film's sharp collection of ideas and gags. From the Dark is awesome, it should make a star of Algar, and I can't wait to see how McMahon follows it up.