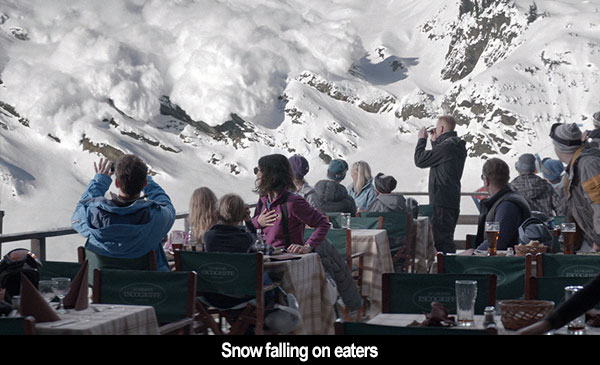 by Walter Chaw As so few people saw the magnificent The Loneliest Planet (including a few who actually reviewed it), it's hardly a spoiler to say that Ruben Östlund's Force Majeure is essentially the droller, married version of Julia Loktev's masterpiece of relational/gender dynamics. Set at an exclusive ski resort in the French Alps, the picture follows handsome workaholic Tomas (Johannes Kuhnke) and his beautiful wife, Ebba (Lisa Loven Kongsli), as they spend a week with their two adorable children in what should be a winter paradise. On the first day, something terrible happens and, more to the point, Tomas doesn't act or react in the way one would expect of a husband and father, leading to a series of increasingly awkward conversations between not only the couple, but also their friends Matts (Kristofer Hivju) and Matts's much-younger girlfriend, Fanny (Fanni Metelius). The brilliance of Force Majeure is how carefully it builds itself to the "big event" and then, after, how perfectly Östlund captures the way people talk to one another, whether married with children or just starting off. It's a withering essay on masculine roles and ego--one, too, on the parts women play in easing or exacerbating those expectations. It's amazing.

More than amazing, Force Majeure does something The Loneliest Planet (one of my favourite films of 2012) wasn't capable of doing consistently: in engaging in a series of serious conversations, it never once feels heavy or portentous. Kind of a miracle, really--the picture incites a thought process, then executes one version of it, then another. As good as the dialogues are between Tomas and Ebba, even better is an interstitial scene with Matts and Fanny that provides counterpoint to the lies we tell each other when we're trying to impress, and the lies we tell years later when we're trying to suppress. Östlund sets everything up with a deft, sure hand. Periodically, cannons go off in the background, timed to set off avalanches literal and figurative. Although Tomas reassures his young kids early on that these are carefully controlled, it's instantly clear that there's no possible way to exercise any sort of control over natural events. A toy drone is introduced like some extraterrestrial visitation, which Östlund figures out how to pay off in the best chat-interruption since the ketchup guy in Blue Ruin. A bus-ride down a serpentine mountain road introduces a new complication that provides Tomas a moment, at last, to declare closure on what's happened. Every step of the way is preternaturally sure.

Force Majeure is as smart as it is hilarious. It earns every payoff, down to a scene where the little girl (Clara Wettergren) calls her mother over to comfort Tomas in a way that could easily have been mawkish in less-skilled hands. The movie boasts of tremendous balance as well: It's Tomas's growth, most obviously, that we track, yet Ebba undergoes her own transformation as she discovers who her husband is, then chooses whether or not to assimilate that knowledge into her interactions with him in this new world. And for that world, Östlund creates an impossible environment of privilege and luxury. The resort is surreal, its lone blemish a grouchy janitor who appears now and again as ironic punctuation and wry, objective point-of-view, heightening Tomas's existential struggles somehow into something Aeschylean. Tomas is a Master of the Universe with his designer sweats and iPhone, and here he is brought low by biology, reflex, and an uncontainable Nature bent on humbling every one of Its offspring. Force Majeure is easily one of the best films in a great year for film, and it confirms Östlund as a major talent to follow.