Fantastic Fest '14: Whispers Behind the Wall + The Duke of Burgundy 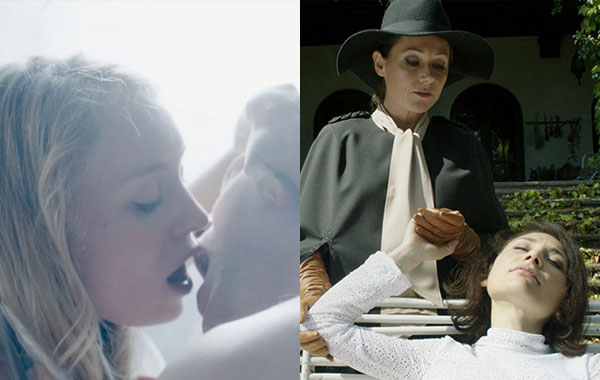 THE DUKE OF BURGUNDY
***/****
written and directed by Peter Strickland

by Walter Chaw Grzegorz Muskala's moody, sexy Whispers Behind the Wall updates Matthew Chapman's little-seen but well-remembered Heart of Midnight. Both films are about a young, vulnerable, single person in a new space, discovering Monsters of the Id hiding behind the walls. Where Chapman's film tossed literal apples at a quailing Jennifer Jason Leigh, Muskala introduces vaginal holes in his hero Martin's (Vincent Redetzki) new flat, the better to hide illicit diaries and, ultimately, ease egress into the climax. More, Muskala fills Martin's never-draining bathtub with red sludge, and hides in its drain, in one of several nods to Hitchcock, the key to the whole bloody affair. It seems that Martin, a student who looks just like Ewan McGregor in Shallow Grave, has secured his new, coveted lodgings on the strength of his willingness to allow a creepy caretaker to take a shirtless picture for hot landlady Simone (Katharina Heyer). It also seems former occupant Roger has disappeared, leaving Martin to eavesdrop on Simone banging her insane boyfriend Sebastian (Florian Panzer) before finding himself in Simone's eye, in her clutches, and in her bed.

A haunted noir, the film hinges on uncomfortable situations and Martin's gaffed voyeurism. Nerdy and insecure, he's helpless before Simone's unexpected, aggressive attentions, free initially of the attendant suspicion of such a thing nursed by every single member of the audience. It's not that Martin isn't in the same league as Simone, it's that women tend not to act like that in movies like this unless they're some kind of literal or figurative monster. The movie raises the ugly spectre of misogyny in a tale that is at its base about the male fear of female sexuality, but it only does so in its adherence to noir tentpoles. The problem with Whispers Behind the Wall is that it offers no surprises; the strength of it is that it's beautifully- shot, edited, written, and performed. Martin's nebbish is appropriately nebbishy; Simone's femme is appropriately fatale. If there's nothing in it not covered in a dozens of films just like it, at least it's a pleasant time spent with skilled artisans at play in the familiar. That said, I did like the way the picture inverts power expectations first during a shower scene, then in a final showdown that uses plastic wrap in a way that feels tight and smart when balanced against an earlier, much different sequence featuring plastic wrap. It's a tidy piece of work, this, and Muskala is someone to watch.

The same could be/has been said about Peter Strickland. With the follow-up to his critical/cult darling Berberian Sound Studio, The Duke of Burgundy, Strickland brings the expected obliqueness, the long, unbroken shots of butterflies formulated under glass, the extreme care in the crafting of mood and atmosphere, to what is essentially a riff on Jean Rollin's peculiar sub-genre of languid, surreal, lesbian eroticism. Meek, mild maid Evelyn (Chiara D'Anna) is at the beck of severe mistress Cynthia (Sidse Babett Knudsen), whose displeasure with Evelyn's work leads to domination and water sports. It's a shocking, and funny, turn followed by another, all leading to the revelation that Cynthia, an apparently respected lepidopterist, may not be as powerful in the relationship as would first appear.

Strickland's film is all about mood. It's sensual, with an almost physical texture; it luxuriates against the eye. Strickland suggests through image and implication that Evelyn and Cynthia's relationship is smothering--in a bell jar, if you will, choked by ether. When Evelyn asks to be kept in a box for being bad, it's just a literalization of the entire film's feeling of all-consuming dependency. A closed circuit. When the picture ends where it began despite an entire middle section with one of the women asserting herself by wearing comfortable pyjamas instead of corsets and leather, it speaks to the cycles of relationships, the push-pull of human experience. Strickland, as he did in Berberian Sound Studio, creates a world that exists entirely as homage to devalued exploitation/art genres. The Duke of Burgundy, named after a rare butterfly in rapid decline in the UK, is itself a rare bird: a comedy of amour fou done in a specific stylistic tradition with something on its mind if you have the patience to hunt it, and the care to unpack it.