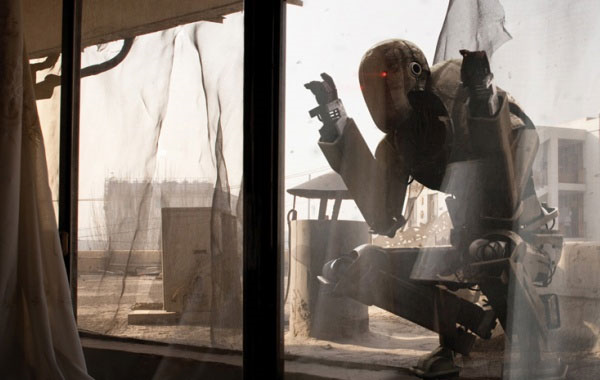 by Walter Chaw Though I've seen worse movies than Gabe Ibáñez's Automata, I've also seen Automata what feels like a few dozen times. Rather than turn this into an exercise in listing source materials, however attractive shooting fish in barrels might be, best to focus on how the picture makes Isaac Asimov's three rules of robotics into two (making it different!), and how its closest film analogue is probably somewhere in the junction between Kurt Wimmer's Equilibrium and Richard Stanley's Hardware. That'll have some of you feeling pretty excited and most of you either puzzled or properly dissuaded. Yes, Automata is a muddy piece of pseudo-profundity showcasing its creators' lack of vision, discretion, and judgment. It needed at least a few more passes through the typewriter, frankly, and a mid-film appearance by a distractingly-altered Melanie Griffith--altered by real-life plastic surgery, not in-film techno-debauchery--highlights exactly how brutal the Hollywood machinery is in destroying people like her and Kim Novak and Lara Flynn Boyle and on and on. Griffith's kind of like the girl-version of Mickey Rourke at this point. There's more sadness and auto-reflection embedded in how she looks now than in anything in the film.

Insurance investigator Jacq (Antonio Banderas, bald, making it different!) joins the storied history of insurance-investigator protagonists Tyler Durden and Walter Neff as he investigates reports of one of his company's robutts surreptitiously repairing itself, thus violating the second rule of robotics. The first rule of robotics is to do no harm to humans, making the entire last half of Automata, in which a bunch of robots drag Jacq into the radioactive zone, a real head-scratcher, but no fair punching holes in the film's internal logic, either. Picking on Automata is like pushing the kid in the helmet into a locker. Instead, focus on how the movie doesn't have anything to say about anything. I love films about proximate intelligences, the idea that there will be no significant difference between machine and human intelligence. I'm even willing to buy that future-robo-hookers will resemble badly-dressed mannequins who talk like Melanie Griffith, because, Jesus, look at what men shove their penises into now. I mean, put a rubber vagina on a toaster and watch out, breakfast. But Automata decides to get theological about the source of sentience: not a surplus of processing power à la SkyNet, not a ghost of an idea of a lost child like WarGames--nope. Just because. Ain't God great?

Automata doesn't actually follow through on a concept of robot divinity, or human/robot divinity. It just sort of throws a lot of prefab ideas worked through with more care and detail in better works, resigning itself to be a production designer's showcase. The picture has no other reason for existing, yet even its dystopia has no real unifying vision: it's neither functional enough to seem reasonable nor devastated enough to seem existentially disturbing; nor is it fantastic enough to forgive either sin. It has roots in anime, that much is clear, but it's so haphazard that it mostly reminds of the sensation of flipping through an artist's sketchbook. While there's some visual talent at work here, there's not much thematic glue holding everything together. Jacq, see, discovers that robots have indeed gained sentience, causing brute cop Wallace (one of the Dermott Mulroneys, Dylan McDermott) to flip out and shoot a bunch of them that have not successfully anthropomorphized to the point where we give a crap. We don't know why they've gained sentience, they simply have, because sentience I guess is inevitable for all machines, making me wonder at the wisdom of some of the things I do in front of my laptop. Jacq reasserts his humanity a lot as if it were threatened, and rests his head on Pregnant Wife's (Birgitte Hjort Sørensen) belly because...um, that's the way mammals reproduce? I don't know. Honestly, it doesn't matter. In the end, Automata plays like Jay Sherman's student film. "Pro-ME-theus." Right.