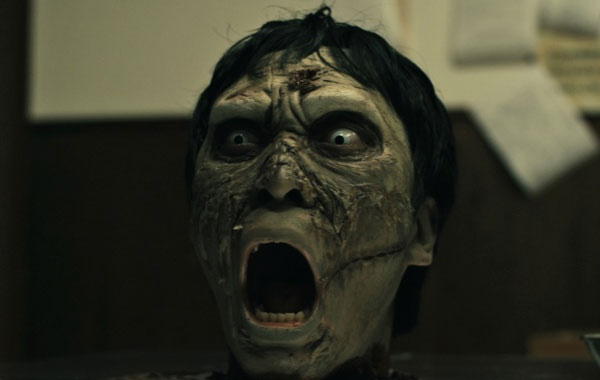 Amateur (***/***, d. Evan Katz)
A hitman's plans for carrying out his contract are slick and sexy, while the reality is clumsy and ridiculous. Katz follows up Cheap Thrills with a short that shows the same comfort with gore, physical comedy, and Naked Gun causality.

Badger (**/****, d. Julian Barratt)
Officious prick talking-head from a BBC-like documentary goes to do a piece on the tragic poisoning of badgers only to discover that one or more of them is still alive. Satisfying for the pleasure of seeing an asshole get vivisected and little else.

Capital Punishment (****/****, d. Julian Gilbey)
A vicious treatise on not the danger of mob rule so much as the essential amorality of capital punishment. It's violent, disgusting, paced well, and absolutely loaded with political text and subtext.

Deloused (**½/****, d. Robert Morgan)
Stop-motion in the finest Jan Svankmayer/Brothers Quay tradition; if it looks too often like a Tool video, at least it's a carefully-crafted one. The venereal/scatological imagery married to a certain Cronenbergian insect ethic and Clive Barker S&M demon thing identify it all as derivative, if inoffensively so.

Equilibrium (*/****, d. Alejandro Brugues)
Two guys' relationship on a desert island is disrupted by a pretty girl, so they revert to equilibrium. It's terrible.

Falling (***/****, ds. Aharon Keshales & Navot Papushado)
An interesting political parable happening somewhere in the tension between Israel and Palestine, which Keshales and Papushado frame like Kiarostami's A Taste of Cherry. The saga of a wounded Israeli soldier and the Palestinian kid who finds her, it is, in other words, a pretty handy summary of what this duo is about.

Grandad (***/****, d. Jim Hosking)
Funny, infernal, somehow a backhand at Russell Brand, Grandad tells of a generational conflict between a wanker and his fed-up grandfather. There's a deft comic touch to it that's appreciated.

Invincible (***/****, d. Erik Matti)
There was a novelty song by The Frantics called "Last Will and Temperament" that I used to listen to on "Dr. Demento". Invincible is a bit like that, but Asian, and disgusting, and tight, and reasonably fun.

Knell (***½/****, ds. Kristina Buozyte & Bruno Samper)
A girl witnesses a murder, then the camera pulls back to see a whole high-rise of murderers staring back at her. Absolutely original updating of a Larry Cohen concept, Knell is alien invasion/body-snatcher/urban paranoia done wordless and hot.

Masticate (***/****, d. Robert Boocheck)
Ripped from the headlines, literally, it plays like a DirecTV commercial gone awry in the best possible way. Home perhaps to the finest punchline of the group.

Nexus (***/****, d. Larry Fessenden)
Fessenden's brilliance is his ability to draw characters instantly and with seeming effortlessness. He does it again in this tale of three intersecting elements and one amazing Frankenstein mask. A return to the inner-city where Fessenden lurked for Habit, with a call-out to No Telling, even.

Ochlocracy (***½/****, d. Hajime Ohata)
An I Am Legend-esque conceit carried through recently in M.R. Carey's brilliant The Girl with All the Gifts, this one talks about what happens when humans are put on trial by zombies for their indiscriminate zombie murder. Plentiful gore, plus zombie-film conceits are undermined and the stinger lingers.

P is for PPPPP Scary! (***/****, d. Todd Rohal)
Absolutely inexplicable and resembling one of those barely-remembered cartoons you saw but didn't process as a child, P is for PPPPP Scary! uses its effects sparingly, never deviates from its vision, and ends up walking that fine line between hilarious and horrific. Still, I'm surprised that this one has endured for me.

Questionnaire (*½/****, d. Rodney Ascher)
I think the moral is that you shouldn't take tests on the street from pretty women, because you tend to want to impress them and then do what they want you to do. Nice use of ape, though.

Roulette (*/****, d. Marvin Kren)
Everything about the production is handsome and professional. The payoff is weak and desperate-feeling.

Split (***/****, d. Juan Martinez Moreno)
Taut, effective, evocative of a 1970s DePalma thriller; everything about Moreno's look at home-invasion and a husband on the phone, helpless, speaks to class and ability. Pity, then, that the climax plays so much like a grasp at relevance when a lower branch would've provided a stronger grip.

Utopia (*½/****, d. Vincenzo Natali)
A society of models disposes of a clumsy, sweaty Everyman. For as much as I like Natali's Splice, and for as much as I think he's got a throughline here, he's not getting better. I don't know if that's because the opportunities are lacking, but his brand is going dark, fast.

Vacation (***/****, d. Jerome Sable)
Nasty, dark, and representative proof that POV horror is alive and well and innovative as hell. This one uses a cell phone to beautiful effect, and reminds me a great deal of last year's celebrated short film with the web-surfing protagonist, Noah.

Wish (***½/****, d. Steven Kostanski)
The premise, the execution--everything about Kostanski's Wish hits pleasure buttons. Kids wish to live in a "Masters of the Universe" world and their wish is granted, with horrific/very funny results.

Xylophone (***/****, ds. Julien Maury & Alexandre Bustillo)
The creators of the incredible French splatter flick Inside demonstrate a sense of humour and reiterate their complete unwillingness to compromise in a dirty little something that ends how you expect but also worse, somehow. I think it's the fact that the monster seems almost apologetic.

Youth (***/****, d. Soichi Umezawa)
Best described as "very Japanese," Umezawa's Youth is, what, Nippon-koku Expressionism? It's a young girl's expression of Id in all its bloody, excessive, melodramatic reaction to little requests made by her squabbling parents.

Zygote (****/****, d. Chris Nash)
Ending with best-in-show, Nash's Zygote is a massively-uncomfortable southern gothic that sees a pregnant woman somehow not giving birth for thirteen years. There's the ending you expect, and then there's the one you never see coming. The big finish is so laden with dank implication that, frankly, it leaves marks.