TIFF '14 Wrap-Up: The Gift of MAGI and some quick takes by Bill Chambers I try my best to stay away from the TIFF Bell Lightbox, Toronto's state-of-the-art cinematheque, during the Festival, because for a goodly portion of those ten days it becomes Pandaemonium with a red carpet. But I made what I hope is a self-explanatory exception for the Industry conference "Ad Infinitum: Bigger, Faster, Brighter Movies - The Changing Creative Landscape of Digital Entertainment," where Douglas Trumbull--who designed the lightshows for, among others, 2001: A Space Odyssey, Close Encounters of the Third Kind, and Blade Runner; directed the cultish SF movies Silent Running and Brainstorm; and engineered Back to the Future: The Ride--debuted/previewed his new MAGI process, a digital replacement for his late, lamented Showscan. Trumbull took the podium to introduce a featurette on his work that set the context for UFOTOG, a short subject shot in 4K resolution and 3-D at 120 frames per second (fps). Although the piece dovetails with Trumbull's geeky interest in space invaders (the title is a portmanteau of "UFO" and "photography," just as MAGI is a weird anagram-cum-abbreviation for "moving image"), its raison d'être is to serve as MAGI's proof of concept. Good thing, too: as a narrative it's pretty incoherent.

Trumbull came of cinephile age during the Cinerama era and has carried a torch for large-format shooting and projection systems ever since. On 2001, he and Stanley Kubrick experimented with frame-rates faster than 24fps in an effort to maximize the clarity attainable from celluloid, which eventually led to the development of Showscan, a 70mm format that captured and projected images at a lifelike 60fps. Trumbull's plan was to shoot Brainstorm's POV sequences in Showscan, but MGM didn't want to pay for something that was going to require an untold learning curve and use up more than twice as much film stock without support in place at the exhibitor level, and in a catch-22, theatre chains weren't about to install expensive new hardware to accommodate one movie. (Peter Jackson went through something similar with his HFR gimmick on The Hobbit, forcing him to pay for it mostly out of pocket. More on that later.) Trumbull compromised, reverting to plain old 70mm, but the production was seemingly cursed, ending in the drowning death of star Natalie Wood and a studio executive's suicide. Talking to moderator Scott Feinberg after the screening of UFOTOG, Trumbull refused to recount the whole ordeal, saying "the [full] story of Brainstorm may never be told."

Although Roger Ebert and various A-list filmmakers remained vocal proponents of Showscan, it died on the vine and Trumbull left Hollywood. After a sojourn as Vice Chairman of IMAX, where he helped take the company public in the mid-'90s, he returned to developing technologies of his own, including, according to his website, a prototype for a "Vacuum Manifold Cap" to staunch the BP oil spill. MAGI was born when Trumbull discovered that today's digital projectors top out at 144fps: He aspired to true 120fps 3-D--anything higher, Trumbull told Feinberg, is more or less wasted on the human eye--and achieved it by setting two side-by-side Canon C500s to run out of phase at 60fps, so that when one shutter closed, the other opened. In active 3-D playback (which alternates left-eye/right-eye viewing), this yields 120 discrete images per second; unlike Showscan, the impetus for MAGI is really to improve 3-D, which hamstrings filmmakers at the current 24fps standard. With MAGI or an equivalent process, they could move the camera without fear of strobing, and capture more fluid action that doesn't sell short the illusion of depth. Motion blur was a major talking point of the presentation. Trumbull claimed that dumbing-down CGI with motion blur not only does a lot of animators' photorealistic work a disservice but has contributed to the rising cost of visual effects as well. I'm skeptical that getting rid of motion blur would make a Transformers movie significantly cheaper to produce, but Trumbull would know better than me. 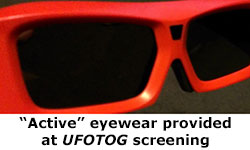 I've never seen native 4K video or active 3-D (passive polarized systems like RealD predominate the multiplex), and that combination of crisp detail, wicked depth, and a lightning-quick refresh rate made UFOTOG an occasionally unnerving experience. There's a shot that gave me a whiff of what it must have been like for silent-era audiences to watch a locomotive barrelling towards them, in which a movie screen-like scrim collapses realistically to reveal a small cluster of people so tactile they could be actors on a stage in front of us. That particular gag owes a big part of its effectiveness to the 3-D, which wasn't just immersive but technically flawless, too. Although Trumbull declared the area of the theatre in which I was seated to be a sweet spot, it's worth noting that I observed nothing in the way of crosstalk or flicker.

Still, I wish I could've seen Showscan before it went the way of the dodo, because I can't imagine a photochemical variant of this process being burdened with this same televisual gloss, something that likely aggravates the liquid feeling of any continuous movement. If you've seen what a flat-screen television running at 120Hz does to movies (it's a current showroom epidemic), you've seen the low-end version of MAGI. I'm afraid Trumbull and I have a philosophical difference of opinion on motion blur: I think it's vital to cinema, whereas he seems to think it's the scourge of same, citing the human eye's ability to rapidly resolve visual information. Perception itself is selective, however, and I suspect if our brain steadied the flow of all movement the way that MAGI does, creating an illusory sensation that the world has sped up, we would quickly go mad. When the great Phil Tippett pioneered "Go motion" for The Empire Strikes Back, whereby stop-motion models were photographed one frame at a time in motion rather than fully stopped in order to generate intermittent blur, it was because audiences were no longer suspending their disbelief at the choppy but fluid motion generated by the traditional method of having every little trembling movement of an armature be in perfect focus.

Trumbull said that MAGI would be the ideal application for something like Avatar 2 (not Avatar 2 itself, though, since James Cameron's off developing a proprietary alternative). I can tell you exactly what that would look like, with all that CG, MoCapped running and jumping displayed with smooth precision: like a console game. He admitted it's not necessarily for all movies, only the spectacles--that the end game is less to redefine cinema than to supplement it by giving data defectors a reason to return to theatres, just as 3-D and widescreen were developed to entice people away from television in the 1950s. Here's where Trumbull began talking out both sides of his mouth. Jackson's 48fps HFR failed, according to Trumbull, firstly because it previewed before it was ready, leading bad word of mouth to strangle it in the crib, and secondly because on The Hobbit the camera shutters were never properly out of phase. Yet he acknowledged that the Hobbit movies in MAGI would probably still invite the same pejorative comparisons to a BBC production, owing to their genre. Suitable for Pandora but not Middle-earth--that's a narrow playing field, is it not?

He also stated that MAGI partner Christie Digital incentivized the switch to digital projection when it first happened en masse by promising--what with modern technology evolving at the current clip--cost-effective equipment upgrades, making exhibitors more receptive to getting theatres MAGI-ready than they were when Showscan happened. Then he spoke of premium, opera-ticket prices and specialty complexes built to maximize MAGI's potential (he grumbled, rightly, that while the Lightbox is an impressively modern facility, they stuck him with cinema 2's rinky-dink screen), and I had visions of the folks from "Shark Tank" kicking him to the curb. Trumbull meanwhile skimmed the very surface of some pressing issues, such as storage infrastructure, and ignored others altogether, such as the theoretical quintupling of the workflow for animators. MAGI is evidently an artistic want (Trumbull alluded to a frustrated action director who was sold on it immediately), but for audiences the problem it's solving is much more oblique than giving voice, colour, or panorama to motion pictures.

I found myself gluttonously trying to get the jump on awards season and year-end lists at this year's TIFF, watching more than I could cover or even intended to. On Twitter I gave shotgun impressions of most of what I saw, but to recap in a little more detail:

National Gallery (****/****, d. Frederick Wiseman) is a veritable mirror image of Wiseman's At Berkeley (both films close with an interpretive dance), albeit with "less admin," as critic Nick Davis pointed out. The focus isn't on London's National Gallery as a struggling institution but rather as an industry unto itself; improbably riveting sequences observe the handcrafting of frames and the effort to stage a triptych so that it isn't enveloped in shadow. Can't figure out if Wiseman's taking a piss with those French-language credits, though. Adding another side to Martin Scorsese's ever-expanding prism of New York, The 50 Year Argument (**½/****, ds. Scorsese & David Tedeschi) feels, for the looming spectre of print's death, like an elegy for the still-thriving THE NEW YORK REVIEW OF BOOKS, with some minor auteur bias for subjects tangentially related to cinema like Joan Didion and the late Susan Sontag. Novelist Darryl Pinckney reads a lovely speech about coming to realize how arrogant he had been in bagging on James Baldwin in his youth, but it's...a speech, completely free of aesthetic interest in a work by America's greatest living director. Nick Broomfield's Tales of the Grim Sleeper (***/****) initially looks to be another of his serial-killer profiles in investigating the “Grim Sleeper” of South Central Los Angeles, one Lonnie Franklin, who was estimated to have killed dozens if not hundreds of black women over the course of two decades. But Franklin has no present tense in the narrative, and surprisingly, Broomfield's humanity wins out over his exploitation impulses: this is the rare documentary of his to not build to a confrontation with its de facto villain. Instead, Broomfield seeks out the stories of these vanished women, in the process proving that Doughboy was right when he said they either don't know, don't show, or don't care what's happening in the 'hood. "They" being, in this particular case, the LAPD, a hobbyhorse of Broomfield's since Biggie & Tupac.

Force Majeure (Turist) (***½/****, d. Ruben Östlund) is a real believe-the-hype deal (Walter Chaw is covering it for Fantastic Fest), while Eden (*/****, d. Mia Hansen-Løve) bottom-feeds off Daft Punk for import the way that movie blogs hope cutting and pasting large swaths of other people's reviews will lead to some refracted glory. Pasolini (**½/****, d. Abel Ferrara), Ferrara's long-awaited docudrama of the Salo director's last days (Willem Dafoe plays him, looking as Mastroianni cool as Pasolini does in portraits), accumulates a kind of raw power despite its often-glancing view of Pasolini, while Finland's They Have Escaped (He ovat paenneet) (**/****, d. JP Valkeappa) similarly increases in intensity, but only by switching genres once its stock story of damaged teenagers in love and exile has well and truly sputtered out. Lastly, Oren Moverman's Time Out of Mind (**/****) is most interesting as proof of Richard Gere's immutable screen persona: the role of a homeless person hangs off him like an untailored suit. Given that, Moverman's long-lens distancing techniques seem like a deflection. As the motormouthed Bubba to Gere's pithy Gump, Ben Vereen wins best in show; between this and a small but potent cameo in Chris Rock's Top Five, he's having a bit of a moment.

Copious thanks to the various publicists and Festival programmers who aided, nay, made possible, our coverage of this year's TIFF. 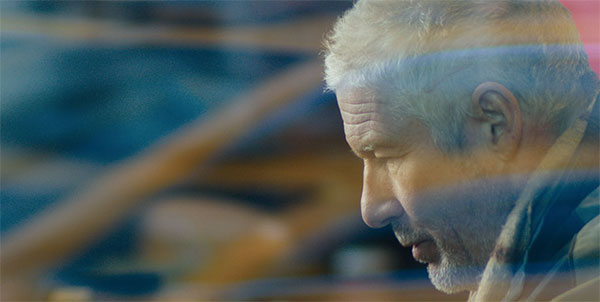