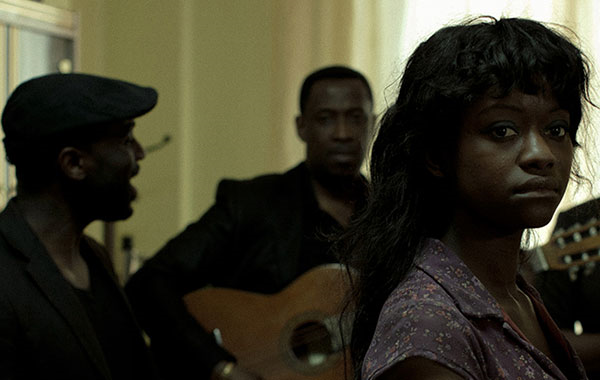 by Bill Chambers Ominously chaptered after the weeks in a pregnancy, Waste Land begins with an encouraging but deceptive touch of absurdity, as Brussels homicide detective Leo Woeste (Jérémie Renier) placidly stands in for the victim at a nauseatingly fresh crime scene while the addled perpetrator tries to reconstruct the murder for a forensics team. Leo's next case, involving the occult-related death of a young Congolese immigrant, coincides with wife Kathleen (the appropriately-named Natali Broods) announcing she's with child--her second, Leo's first--and planning on aborting it due to her husband's grim attachment to his profession. He goads her into keeping it by pledging to quit the force once he's through with this latest investigation, but it proves an unreasonable vortex that soon has him becoming infatuated with the dead man's sister (Babetida Sadjo) and going off the grid, as well as the proverbial deep end.

Though shown early on cutting and teaching his 6-year-old stepson how to fire a gun, Leo's descent into a kind of fugue state seems dramatically excessive, and it's rhymed by the destabilization of the film's own narrative, which feels no less unceremonious. Like Chronicle, for want of a more suitable analogy, the transition from torment to anarchy is whiplash and inorganic, inexcusable but for the fact that a more developed three-act approach would've got us there anyway. Leo's self-destructiveness is compelling insomuch as Kathleen's pregnancy makes it emotionally manipulative, and the ambiguity of his suffering--actual black magic may be doing a number on his soul--only amounts to tonal confusion, if not cowardice: Pitched between an honest, albeit half-baked, presentation of mental illness and Angel Heart, Waste Land is sadly lacking in conviction. There is some minor auteurist interest in the star of La Promesse indebting himself to another woman of colour, although Renier's fixed look of bemusement mostly impersonalizes the character. Programme: Vanguard