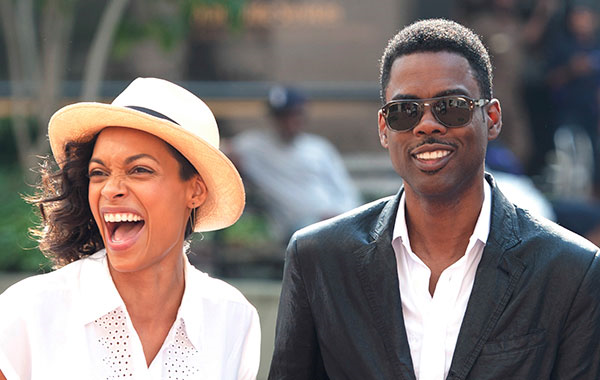 by Bill Chambers Chris Rock's Top Five seems to begin in medias res and then backtrack, but in retrospect the opening sequence--a nicely-sustained tracking shot of Rosario Dawson and Rock taking an afternoon stroll in New York, bickering about whether Obama has actually paved the way for other minorities to become president--could be a flash-forward to the post-film future of these characters. That's kind of a comforting notion; the problem is I'd rather be watching that light relationship comedy, where they're already together and routinely engaging in these Woody Allen dialectics, than this one, in which Dawson's Chelsea and Rock's Andre do the Forces of Nature/A Guy Thing boogie on the eve of Andre's marriage to one of Bravo's many profligate reality-TV subjects (Gabrielle Union). A comic-turned-megastar who made bank starring in a cop-movie franchise as a machine-gun-toting bear (Rock may have an even lower opinion of the filmgoing public than Mike Judge), Andre is asking to be taken seriously with his newest project, Uprize, about the slave revolt in Haiti. To that end, he relents to a NEW YORK TIMES profile, even though the paper of record has never given him a good review; Chelsea is the writer they send, and she comes with something of a hidden agenda. At the risk of spoiling what that is, by the end of Top Five, one thing is abundantly clear: Chris Rock hates critics.

I stopped writing off Rock as a filmmaker when he swerved left to remake an Eric Rohmer movie (the result, 2007's I Think I Love My Wife, is pretty good, too), and Top Five's focus on navigating various familial and social scenes suggests he may have taken inspiration here from Julie Delpy's 2 Days in New York, in which he co-starred. But a late-film stop at Manhattan's famed Comedy Cellar has the unfortunate effect of recasting the rest of it--the discursive vignettes, the confessionalism, the calling-in-big-favours cameos, the gently-surreal flourishes--as a serious case of "Louie" envy, minus the finesse of Rock's Pootie Tang director Louis CK. Rock also remains a terrible actor who pantomimes his emotions to the cheap seats, though his chemistry with Dawson is such that fewer obstacles contriving to push them apart would be appreciated. While we're at it, more scenes like Andre's sharp-edged encounter with his father (Ben Vereen)--theirs is a mostly-unexplored dynamic--could only enrich the picture, which equivocates a bit too much between being a formula romcom (one with some admittedly zesty raunch) and something a little pricklier. Programme: Special Presentations