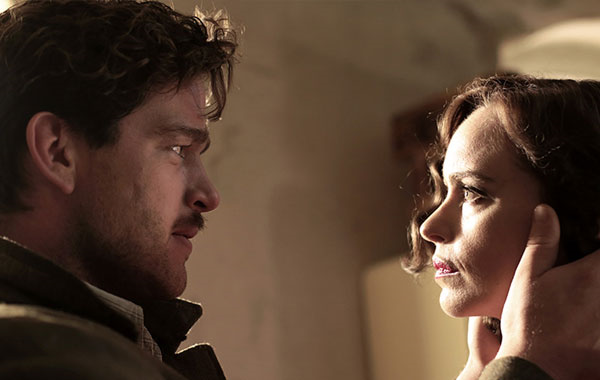 by Angelo Muredda A smart, tidy film about dumb people with messy histories, Christian Petzold's Phoenix walks the line between psychological thriller and earnest postwar allegory with grace when a little gangliness might have been nice. Petzold MVP Nina Hoss knocks it dead as Nelly, a Jewish Holocaust survivor betrayed by her wormy husband Johnny (Ronald Zehrfeld), left for dead, and now come back to life à la Franju, under a heavily-bandaged face. Instead of wanting revenge, Nelly yearns to recapture herself so that Johnny will recognize her as Nelly, opting to have her features restored to their original appearance as closely as possible. Never one to pay the most attention to detail (which is seemingly a satire of beefy husbands as much as it is of postwar German denial), Johnny welcomes back the reconstructed Nelly not as herself but as a woman who looks a lot like her, and who may just be the key to capturing his dead wife's inheritance, if she can play the part well enough.

Hoss certainly can: There's such complexity and emotional depth to this performance--from Nelly's girlish pride at being able to more or less pass as herself to her subsumed anger at being made the pawn in her own disinheritance--that one wishes a more substantial (or, in lieu of that, more passionate) narrative were built around it. Though Vertigo is the obvious reference point for what Petzold is after in generic terms, consider how much his allegory for the way both perpetrator and victim would rather avert the other's gaze and playact into infinity than squarely own their shame resembles nothing so much as the myopia of Clark Kent's colleagues at the DAILY PLANET, felled by the presence of eyeglasses. This is a daft conceit on which to hang such a serious critique, but credit Petzold for seeing it through to a masterfully-constructed finale that lands the punch despite being so utterly preordained. Programme: Special Presentations