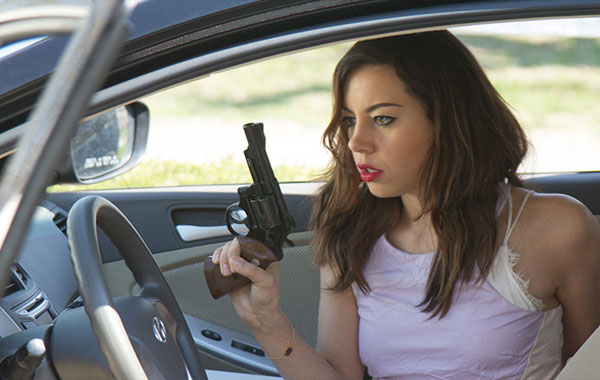 by Bill Chambers The third, shortest, and presumably final entry in an improbable film series of seesawing returns, Hal Hartley's Ned Rifle is the religious component of a triptych that has thus far loosely tackled Art (Henry Fool) and Politics (Fay Grim). Titular Ned (Liam Aiken) is the offspring of drifter Casanova Henry Fool (Thomas Jay Ryan) and hapless Fay Grim (Parker Posey), the latter of whom begins this movie in prison as a result of Henry's antics, consigning Ned to the care of a reverend (Martin Donovan) and his family. Wanting to biblically avenge his mother, Ned follows a trail of breadcrumbs back to his deadbeat dad; yes, the film has the same basic quest premise as Fay Grim, though it takes the form of an askew It Happened One Night this time instead of another globetrotting "Where in the World Is Carmen Sandiego?" journey. Ned's interloping travelling companion is Susan (Aubrey Plaza--not a fan, but she curtails her most irritating mannerisms here, and looks dynamite), a grad student with a hidden agenda that somehow entails writing her thesis on the poetry of Simon Grim (James Urbaniak) and ghost-authoring Fay's memoirs. ("Susan's brilliant, and she's a good person, but she's totally fucked-up," Simon warns Ned. He could be describing any Hal Hartley protagonist.) A God-fearing Born-again, Ned fends off what he perceives as her advances, but he bristles with jealousy once they track down Henry at a mental hospital and she becomes drawn into his father's orbit, like so many before her.

I'm happy to report that Ned Rifle resets to something like the comic-Bresson tone of Hartley's signature works (including Henry Fool) after the utter arcaneness of the Dutch-angled Fay Grim, yet it still feels expository in a way that Hartley never used to; would the filmmaker, in his prime, have cut away from Simon getting ready for a comedy lesson (from Troma's Lloyd Kaufman, no less)--stand-up is his new jam--to show Ned checking his luggage? Unfortunately, the stilted portrayal of an already-humourless title character makes any resumption of the plot kind of a chore, although Aiken's troubadour handsomeness is as startling as any of Mason, Jr.'s sudden transformations in Boyhood, given his more familiar visage as the squinty, Pez-headed child star of Henry Fool and stuff like Lemony Snicket's A Series of Unfortunate Events. Really, Hartley reassembling this eclectic cast for three movies over sixteen years is a feat on par with Richard Linklater's own chronicles of the passage of time (especially considering Hartley has only the machinery of crowd-sourcing behind him now) and produces a similar tingle of authentic nostalgia. Linklater's decades-spanners are built on sturdier foundations than Hartley's shaggy-dog narratives, of course, and part of me will always resent any sequel to Henry Fool for undermining the ambiguity of its powerful closing shot, in which Henry runs like a motherfucker towards an unseen destination. The good news is that Ned Rifle seems to remember that final shot well, providing it with poignant symmetry as the capper to a climax that's devastating despite its somewhat reductive Freudian hook. Hal Hartley: good at endings. Programme: Special Presentations