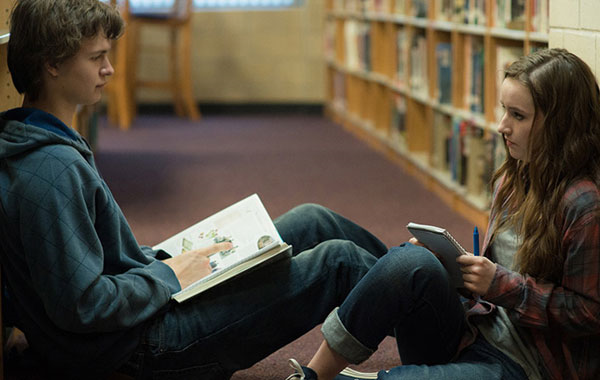 by Bill Chambers We've entered a golden age of movies that use state-of-the-art technology to rail against the use of state-of-the-art technology. An ensemble piece sardonically narrated in the third-person by Emma Thompson (think Little Children by way of Thompson's own Stranger Than Fiction), Jason Reitman's Men, Women & Children paints a glum picture of the Internet's hold over the American middle-class. In no particular order, husband and wife Adam Sandler and Rosemarie DeWitt seek out extramarital affairs online while their insipid son Travis Tope streams BDSM porn and sexts with cheerleader, classmate, and aspiring famous person Olivia Crocicchia. Crocicchia's mother Judy Greer is a former model living vicariously through her daughter's burgeoning career, posting predator-baiting snapshots of her to the tut-tutting of overprotective mom Jennifer Garner, who thinks nothing of printing out daughter Kaitlyn Dever's private messages to read like the evening paper. (She is, in all sincerity, more infuriating than Piper Laurie in Carrie.) Bookish Dever, meanwhile, finds herself the Jane Burnham to a Ricky Fitts played by dreamy Ansel Engort--a former football hero who, to the chagrin of sports-nut father Dean Norris, retreated into the world of online gaming after his mother left home. Also, there's a thread involving anorexia and rapey boys that never doesn't feel grafted onto the narrative out of some insecure impulse to physicalize the abstract threat of cyberspace.

Working on a vast but exceptionally narrow canvas, Reitman has made a film about technology's role in the lives of white suburbanites and their teenage offspring; Dennis Haysbert shows up to briefly be someone irresistible to DeWitt, but Men, Women & Children isn't interested in his story, only his visual dynamism. Has there ever been a person of colour in a Jason Reitman movie who constitutes an actual character? As Luddite polemic, the picture is unpersuasive: Maybe this is just my opinion, but teenagers and middle-aged married couples were not exactly celebrated for their communication skills prior to the advent of smartphones and tablets. I'm reminded of another film from earlier this year, Transcendence, which just as emphatically ends with the message "unplug" after two hours of missing a barnside target. Focusing on the Internet as an enabler of genies long out of the bottle (porn, infidelity, eating disorders) simply gives an A-list filmmaker license to luxuriate in the facile dramatic territory of Lifetime movies. Reitman can't elevate the material because the whole appeal of Men, Women & Children becomes how will someone of his calibre handle the money moments, marking it as more of the same emotional pornography. I'd be remiss if I didn't mention the scene where Engort learns that his mother is getting remarried via a Facebook slideshow of her fiancé's proposal: they aren't selfies or individual shots and no one's around in their secluded little spot in Napa Valley, so who's taking these artful stills? That's either a cunning critique of technology annexing our personal spheres or pure Hollywood horseshit. My money's on the latter; unplug. Programme: Special Presentations