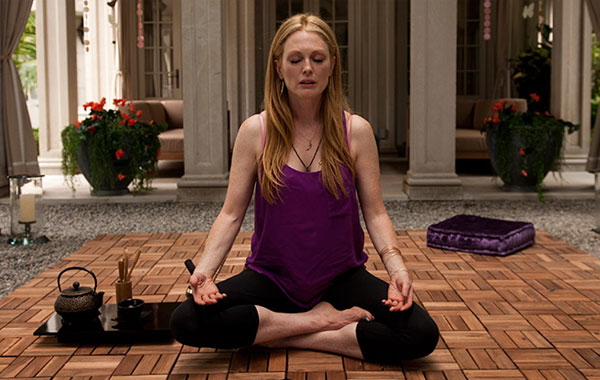 by Bill Chambers There's something vaguely pathetic about Bruce Wagner continuing to write these Los Angeles tapestries that send up the movie business, since his Hollywood career peaked in the early-'90s (and the vision of these satires is ossified thereabouts). And getting David Cronenberg--someone so insularly Canadian, and probably the last filmmaker to pore over the trades--to direct one of them is lunacy, albeit potentially inspired in the way that getting a German to helm Paris, Texas was. Indeed, though, Maps to the Stars is the blind leading the blind, taking place in an obsolete world where Carrie Fisher, playing herself, is some kind of industry gatekeeper and a remake of an old black-and-white melodrama is the hottest project in town. Fresh off the bus from Florida, the mysterious, lightly-disfigured Agatha (Mia Wasikowska) arrives in L.A. with an ally in Fisher, who helps get her a job as the personal assistant to high-maintenance Havana Segrand (Julianne Moore), an actress haunted by both her own former glory and the superstardom of her late mother (Cronenberg's paper-doll muse Sarah Gadon). Havana has regular, sexually-charged sessions with self-help guru Dr. Stafford Weiss (John Cusack), father of teen sensation Benjie Weiss (Evan Bird), a nightmare of Bieberian entitlement who, like Havana, has lately been receiving unwelcome visitations from the dead.

What's curious is that Cronenberg's and Wagner's personalities combine to produce an affect not unlike Todd Solondz, with Cronenberg's antiseptic gaze drying out the arch tenor of Wagner's dialogue until what's left is an unsavoury irony. The surprise is just how much Wagner's voice dominates, to the point where "Blue Matrix", the "Star Trek" parody depicted in his directorial debut I'm Losing You, puts in a lengthy appearance. Again: I'm Losing You was sixteen years ago--time does not sharpen pop-culture commentary. Cronenberg is definitely felt in the casting of Robert Pattinson as a limo driver this time and in the equally cheeky prominence of a Genie Award (Canada's Oscar equivalent until 2012) within the narrative as well as the mise-en-scène, but if he's the wrong guy for (tired) riffs on Garry Marshall and Vicodin, he's really the wrong guy for Wagner's concept of a town full of Scrooges manifesting their guilt supernaturally. The metaphysical bores Cronenberg, and it shows in how readily the film's depiction of ghosts lapses into cliché. Only Agatha, as a living embodiment of the past, discourages that superficiality, her burn scars acting as a window on the material for a director obsessed with the mutilation of flesh that alas proves too suffocatingly narrow. Programme: Gala Presentations