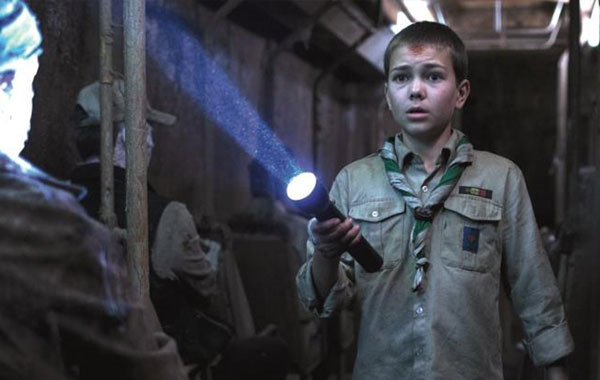 by Bill Chambers Cub--or Welp, as it is humorously called in the original Dutch--has a killer hook, or at least a viable-enough premise that some considerable buzz has built up around this Midnight Madness entry. A troop of cub scouts goes camping in Belgian woods allegedly occupied by Kai, a boy who becomes a werewolf by night; the two young scout masters, Peter (Stef Aerts) and Chris (Titus De Voogdt), build their own buzz about the cryptozoic creature to have something for the campfires (also because they seem to like antagonizing children), unaware of course that Kai does exist in the form of a lightning-quick feral kid wearing a mask fashioned from tree-bark. Sam (Maurice Luijten) actually stumbles on Kai's treehouse, where the child stows trinkets purloined from campers, The Final Terror-style, but being an apparent charity case gives Sam zero credibility with those he tells--particularly Peter, who takes sadistic glee in isolating Sam from his peers and targeting him for military punishments that Chris, the more empathetic and merciful of the two, is never around to avert. Seriously: even with a wild child who can't figure out how to work a can opener living large in a treehouse worthy of I.M. Pei, Chris's constant absence is the movie's most confounding mystery.

Who doesn't want to see cub scouts chased around by a monster? But there's a way to be subversive without becoming an asshole, and sufficed to say Cub shuns it. The low point is when Peter sics his bull terrier on Sam, and in retaliation Kai, who's forged an E.T. bond with Sam, strings the dog up in a sack and proceeds to beat it to death with Sam's assistance. It takes an agonizingly long time, as if the filmmakers think this is a moral justice to be savoured; Sam's descent into vengeance-mindedness thereafter is a deeply cynical affirmation of his reputation, though who could enjoy watching his most deserving tormentors get it, anyway, with that poor dog's whimpering echoing into eternity? I have yet to mention the picture's lone female presence, a perky blonde named Jasmijn (Evelien Bosmans) who tags along as Peter's girlfriend and a scout mistress in her own right. Cub's only real utility is as a demonstration that when you're the only woman in a horror movie's ensemble, you wind up picking up the slack by embodying every archetype at once: babysitter, horny girlfriend, voyeur-bait, rape-bait, Final Girl, virgin sacrifice... Welp, indeed. Programme: Midnight Madness