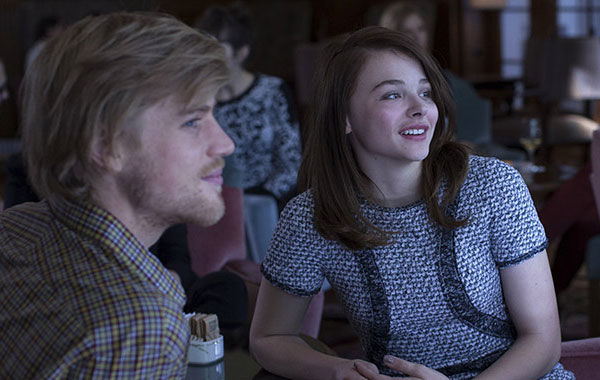 by Angelo Muredda A master class on acting played simultaneously to the orchestra and the cheap seats, Olivier Assayas's Clouds of Sils Maria is an odd, beguiling thing. Juliette Binoche is Maria, an international star of film and theatre (naturally) on her way to accept an honorary award on behalf of the director and dramaturge who made her career when she was only eighteen in his infamous Maloja Snake, which sounds a lot like The Bitter Tears of Petra von Kant by way of All About Eve. When he dies, Maria finds herself commissioned to star in a remake by a hotshot talent of the German stage, who sees her now as Helena, the older woman in the same-sex romantic drama, giving her role of the young seductress and abandoner Sigrid to rising starlet Jo-Ann Ellis (Chloë Grace Moretz). If that isn't enough, the text--a younger man's treatise on the loves and rivalries of women, as Maria has come to see it--has seemingly taken on a radioactive agency of its own, creeping into Maria's hip-joined relationship with soulmate, line-runner, and personal assistant Valentine (Kristen Stewart), who's becoming yet another Sigrid at about the same pace Maria is settling into Helena's skin.

Endlessly self-reflexive to the point of pausing to annotate itself whenever it gets the chance ("It's a play about x," people are fond of saying about the text, as if Helena and Sigrid's melodramatic exchanges about how exactly they're feeling are somehow opaque), Clouds might easily have been a wreck, an obnoxious film-school exercise for the Irma Vep fan club. There are times when it certainly threatens to be, as when the filmmaker switches up the format to take in the varying image qualities and aspect ratios of, say, a YouTube clip, or a beat-up documentary about the titular cloud formation--a form of genre-play better left to a more playful director. That the film is nevertheless a wry, tender, surprisingly affectionate affair is a testament to both Assayas's fleetness and his enormously giving cast. There's a delicacy to Assayas's touch here, a sort of weightlessness about it, that ably neutralizes most of the cumbersomeness in the script; it's the same soft touch that paradoxically felt wrong for his last, Something in the Air, which could've used a bit of grounding in the soil.

Mostly, though, this is the Binoche and Stewart Show. Each makes the most of a script that seems tailored to their respective strengths in their many intimate, chatty roundelays, with Binoche's boisterous laugh cutting through Stewart's earnest reserve, Stewart's sincerity disarming Binoche's irony, and around and around. If ever one forgets that one is several layers deep into metafiction, it's thanks to their warm and frankly daring character work, best exemplified by the moment where Valentine defends Jo-Ann's vulnerable performance in a junky sci-fi franchiser. "It's fucking brave," she insists of the young celeb's devil-may-care work to the unimpressed Maria, and so is Stewart. Whatever you think of Assayas's text, it's a bit ingenious that he found a way to sneak his apparent defense of the criminally-underrated actress into her own mouth. Programme: Special Presentations