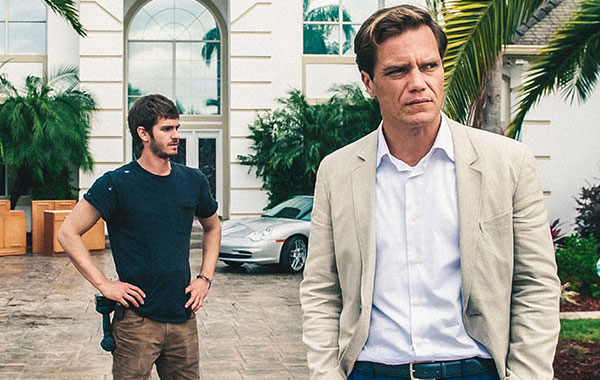 **/****
written and directed by Ramin Bahrani

by Angelo Muredda Where was there to go for Ramin Bahrani after the ghastly critical Americana of At Any Price--complete with race cars, ominous cornfields, and home movies--but a wildly over-cranked story about the housing crisis? Another silly, histrionic look at America Today, 99 Homes continues Bahrani's curious late run as the unaccomplished middlebrow answer to Nicholas Ray. It stays afloat where his last sank, though, largely thanks to some inspired scenery-gorging by the perpetually-vaping Michael Shannon, playing slick Rick Carver, a side-armed real estate broker who makes his bones seizing other Floridians' foreclosed houses and flipping them to the banks that probably shouldn't have given them a loan in the first place. Enter Andrew Garfield as working-class angel and struggling single-dad Dennis, who cedes his keys to the devil in the tan jacket only to go to work for him for a shot at getting his family home back. What are the odds he'll keep his house and, more importantly, his soul?

Despite his pedestrian visual style--the opening long-take invites unfortunate comparisons to Goodfellas as well as Aaron Sorkin's walk-and-talks--and penchant for saddling his characters with risible speeches about why they are the way they are, Bahrani has material for a decent melodrama here, as good folks find their lives reduced to paperwork and whatever they can fit into a cardboard box or two. 99 Homes also works well enough as a procedural about the seemingly magical process, usually aided by a fortuitously expedited form that seems to bypass the eviction-appeals timeline, that turns a homeowner into a trespasser on her own property. It's as a morality play about Dennis's transformation from good bloke to mini-Rick that the movie falls apart, despite Shannon's full-bodied performance as the evil mentor. Bahrani deserves some credit for cutting Rick the human cockroach a little slack for much of the film, recognizing him as at-worst-complicit in a system that is rigged from every side. He deserves an equal amount of scorn, then, for betraying that characterization in the final act, weakly standing up against one broker's bad dealings as if that were enough to bring all the banks to justice. A pleasant fancy, maybe, but also just plain bullshit. Programme: Special Presentations