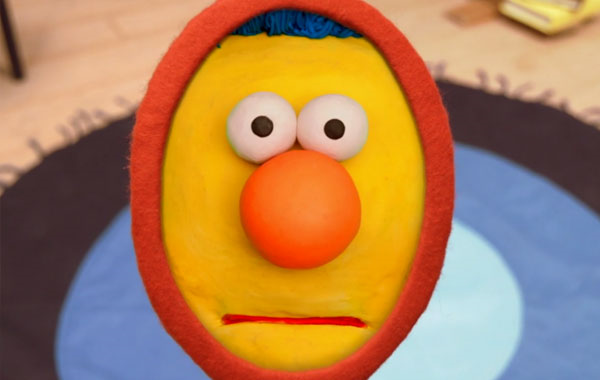 Toutes des connes **/**** (France, 6 mins., d. François Jaros) Recently redubbed Life's a Bitch, Toutes des connes is a fitfully-engaging relationship dramedy composed of a few dozen ultra-shorts featuring a guy (scriptor Guillaume Lambert) who breaks up with his girlfriend, goes through stages of grief and acceptance, then gets back together with the girl. It's well-done for what it is but feels like it needed half the time to be what it is. Toutes des connes doesn't do anything surprising or innovative, announcing itself conspicuously as a calling-card film for director Jaros. Yes, I see that you can shoot and edit, though the grieving dude with the shaving-creamed face staring at the mirror thing was funnier in Raising Arizona.

Invasion ***½/**** (France, 4 mins., ds. Hugo Ramirez & Oliver Patte) A pretty awesome little animated zombie flick, Invasion boasts a feral energy and a kick-ass beat that hits all the major genre points while adding a couple of images to the conversation. It uses what looks like Ralph Bakshi's rotoscoping technique to lovely, jarring effect, taking advantage of the process's natural frenetic energy to lend anxiety to its impressionistic bloodletting. My favourite is a short sex sequence that goes from surprisingly erotic to a place that undermines pretty much every expectation I had of where these things usually go. Tight, grimly-focused, and enough to make me hope that these guys get their shot at a feature soon.

Lava **½/**** (USA, 7 mins., d. James Ford Murphy) Pixar's newest concerns a lonesome volcano modelled after the late Hawaiian megastar Israel Kamakawiwo'ole, singing his sadness over a millennia in hopes that he'll one day be paired with a lovely waihini volcano as lonesome as he. It does the Pixar pathos thing, allows for a happy ending, relies on a cutesy homonym play ("love/lava"), and accidentally, I think, produces a seven-minute euphemism for semen and ejaculation. It's beautifully animated and...zzzzzzzzzzz. I'm not sorry I watched it but I have no desire to see it again.

Box */**** (USA, 5 mins., d. Tarik Abdel-Gawad) Gob Bluth called tricks something a whore does for money, so Box, a demonstration of graphics-imaging that would have been mildly impressive at one time, is about illusions. I guess. Decades past its sell-by date, it's the type of thing that mildly-precocious children on their parents' Mac Books can do if they're not too busy doing cooler things. Imagine a guy standing in a warehouse, performing a Vegas routine with two giant flatscreens rolling out next-gen "Battlezone" graphics set to an insistent beat. The only thing missing is the white leisure suit.

Verbatim **½/**** (USA, 7 mins., d. Brett Weiner) A dramatization of a ridiculous legal brief in which a man being drilled claims not to know what a "photocopier" is, Verbatim makes the most of its limited space and breadth with tight editing and good performances. Another calling card, it mostly reminds of similar scenes in David Fincher's The Social Network where Fincher demonstrates how it is that scenes like this should be shot. It's not bad, in other words, and its rimshot does a pretty good job of underscoring both the essential stupidity of most people and the windiness of lawyers in certain settings (having read my share of briefs, Verbatim strikes me as almost kind), but it doesn't leave much of a lasting impression. It's fine.

Aissa *½/**** (France, 8 mins., d. Clement Trehin-Lalanne) A grim, literally clinical cataloguing of an African immigrant going through what we infer is a naturalization process, Aissa's title is like Pound's "In a Station of the Metro" in that it gives meaning to what follows. The title is the name of the subject in question (Manda Toure), and the message appears to be that we would respond differently to the world's various immigration disputes if we could somehow humanize "the Other." Therefore, we see this lovely young woman as she's dissected in terms of gum health and bone ossification. She's a person, don't you get it, you Tea Party monsters? Bam!

Feast */**** (USA, 6 mins., d. Patrick Osborne) The sort of garbage Disney makes when left to their own devices, this little animated ditty follows an adorable puppy's-eye view of his master's relationship with a vegan. I kind of thought the short was going to be about dog cancer, the way he's fed people food in excess throughout, but it seems the picture's more interested in giving its audience diabetes. It'll get love it doesn't deserve in exactly the same way as the next viral video of something cute doing something cute. Think of it as the animated-short equivalent of a reflexology hammer.

Don't Hug Me I'm Scared II: Time ****/**** (UK, 4 mins., ds. Becky Sloan & Joseph Pelling) Three puppets--four if you count the demonic clock guy--in a "Pee-Wee's Playhouse" setting, sing the peculiar qualities of time in this deeply-, forever-scarring short by people crediting themselves as "Becky & Joe." It's perverse and brilliant in equal, indistinguishable measure, and something so existentially terrifying that I've sought it out online and watched it a few more times. I want to play it again right now, to be honest, as it has the quality of a particularly horrifying fairytale and regresses me to the age where I needed to experience uncomfortable stories over and over and over. It functions as its own time sink, in other words. I marvel at how it sets up its conclusion first with a tree, then with a disturbing father-puppet--at how what at first is adorable in a "Flight of the Conchords" way devolves into something decidedly Meet the Feebles. Holy Christ.