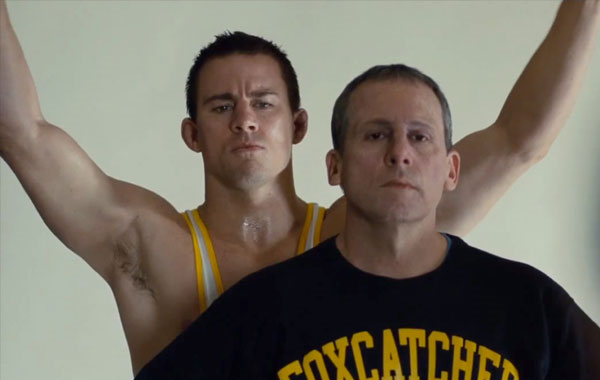 by Walter Chaw Bennett Miller's Foxcatcher is timely because of its excoriation of the 1%--and timeless because of the care with which it handles relationships between men, and between men and their mothers. It has faith in its audience in a way that's rare and always has been, leaving wide swaths of exposition buried in glances and gestures, making itself into something that's very much like the amateur wrestling it ably recreates in the film. It's a big movie composed of subtle movements; it's reticent. It's also grounded by unbelievable performances from Mark Ruffalo, an actor I really like who's never been better; and Channing Tatum, who reduces himself to a pure distillation of his masculinity and will probably be underestimated as a result. An early moment with Ruffalo and Tatum--playing Olympic champion wrestlers and brothers Dave and Mark Schultz, respectively--as they train in a dingy little college gym, is grim and wordless, bloody and violent, and capped by Dave cuffing his little brother and asking for a hug as he drops him off. It's brotherhood in its intimate complexity in just a few gestures.

Mark is recruited by peculiar billionaire John DuPont (Steve Carell), a wrestling aficionado living in the shadow of his family's wealth and a dowager mother (Vanessa Redgrave) who's disappointed in the achievements and interests of her philanthropist, ornithologist, philatelist son. To prove himself (at least in part, we glean), DuPont spends dump trucks full of money on the U.S. Olympic wrestling program and moves the entire production to his titular estate. There, he allows Mark a sense of self-worth and identity apart from his better-adjusted brother. DuPont also eventually courts Dave, however, and things begin to fray between Mark and DuPont right around the time of the 1988 Seoul Olympics.

As he plays him, Tatum's Mark Schultz is a bundle of repression--a Jake LaMotta in a wrestling circle all of tightly-wound aggression and inarticulate rage. It's never mentioned, but the way Miller shoots him in a series of humiliating situations and Mark's consumptive aftermaths is heartbreaking and terrifying in equal measure. For the longest time, Foxcatcher seems to be a memoir of Mark's inevitable explosion. The film is doom-laden, soul-sick; Miller shoots in a brown humour throughout. Its conclusion in a Valley Forge winter is brilliant, and Miller pulls all the dysfunction of misplaced patriotism and unfettered cults of the masculine from it that he can. Carell's DuPont is the showiest performance of the three: interesting, but at times distracting. What works is Miller's control of the material, even if there's maybe one scene too many of DuPont's crippling desire to impress his mother, or one too many of Carell's instincts as a comedic actor peeking through, such as during a helicopter ride to a benefit event.

Foxcatcher is ultimately Ruffalo's film. As the older Schultz brother, he creates, in what is arguably a supporting role, something completely alive and fascinating. His Dave is a doting father to not only his two young children, but Mark as well. A moment immediately following a setback for Mark has Dave clubbing him in a hotel room, then whispering in his ear that he's his brother and that he loves him. Ruffalo expresses volumes with his body language and delivery. The way he tilts his head when he asks a question. The way he falls back on teaching wrestling technique when nothing else seems to work. Foxcatcher is so compelling, I think, because it's a film that can only really be a film. The devotion between the brothers, the odd surrogate/missing father tropes, the boy wanting to impress his mother--all of that is mawkish in writing, trite in any other medium. But in the way these men touch each other, and look at each other, and finally find their inability to healthily communicate end in tragedy, speaks eternal to the saga of men. I overheard complaints that there's no explanation for what happens in the movie; I'd counter that it does all the explaining it needs to--the trick is learning to listen the right way. That's what Foxcatcher's about. It's fantastic.