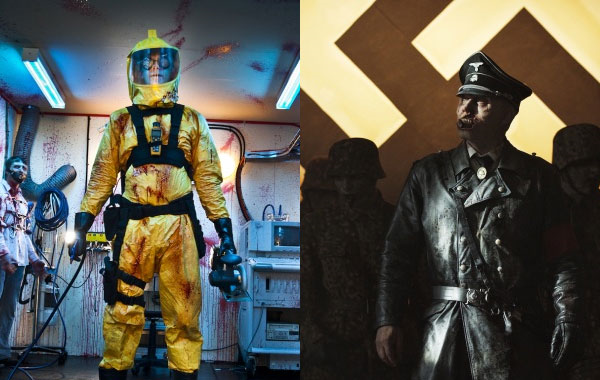 by Walter Chaw Zombie movies are pretty played-out by now, strung out to the point of zombie romances, but I feel like there's room, yet, for innovation. Alas, neither Kiah Roache-Turner's Wyrmwood nor Tommy Wirkola's Dead Snow 2: Red vs. Dead does much to reinvent the wheel, although both seem to know and appreciate their sources. Start with Wyrmwood's faithfulness to the frenetic vibe of Peter Jackson's Dead Alive, stirred in with some of the costuming and road-play of the "Mad Max" series, in its tale of a zombie invasion that leads to the partnering-up of Barry (Jay Gallagher) and Benny (Leon Burchill). When Barry's sister Brooke (Bianca Bradey) gets abducted by an evil Save the Green Planet! extra and sent along an endless highway with newly-developed powers, it's up to Barry and Benny to splatter a couple hundred zombies to save her bacon.

Wyrmwood is standard stuff with a few good kills and a handful of compelling makeup effects, pulled together with high, some would say manic, energy, culminating in a strangely zeitgeist-y mutation where it turns out that some of the zombies can be controlled telepathically or someshit. It doesn't serve much of a purpose, really, beyond allowing Brooke to be something slightly more than the screamer/hostage/damsel-in-distress. The real interest, if there is any, is that Benny is Aboriginal; I don't think I've seen this character played by that minority before. For the rest, it's the usual stuff: wounded heroes having to dispatch their loved ones; schlubs learning of their secret superhero power of zombie-killing; and the revelation that the real monsters are our fellow Man. The biggest crime of Wyrmwood at the end of the day is that it's clearly a first film from a pair of brothers (Tristan Roache-Turner co-wrote the screenplay) who've endeavoured to pack every single gag they've ever wanted to execute into what they hope isn't their last film. It's exhausting--obnoxious, too, truth be told.

Dead Snow 2 is also obnoxious, but funnier and better-assembled. It's a less droll Shaun of the Dead, essentially, with a little Body Parts thrown in. (Or The Hands of Orlac if you want to get pretentious about it.) A can't-lose premise of Nazi zombies is amplified this time around with more Nazi zombies, running wild in a Norwegian countryside that looks "more like Endor than Hoth," exclaims one of the lovely American femmes (Jocelyn DeBoer). She's there with self-proclaimed "Nazi Squad" nerds attracted to the plight of first-film "final girl" Martin (Vegar Hoel), who, having amputated his infected arm, Ash-style, in Dead Snow, finds it grafted back on in an act of not-a-great-idea socialist medicine. This is, of course, Obama's fault. The arm is a murdering zombie bastard, leading to a lot of great Tales from the Crypt: Demon Knight super-punching and fist-gutting. And just like in Wyrmwood, there's some stuff about the possibility of domesticating zombies, Bub-like. Again, derivative (there's also a Griffin Dunne in American Werewolf in London character), but carried off with such a sense of fun and energy that it doesn't really matter.

The gore is plentiful and sometimes inventive (I love the use of a zombie-familiar as traction to one of the eternally-bogged cars in movies like this), and the addition of geek avengers leads to Scream commentary like, "A whole new genre, man." All of it contributes to the sense that the Dead Snow 2 guys are smart genre fans just having a good time. It joins stuff like Tucker and Dale vs. Evil--which I actually didn't care for--but exceeds it by deciding to get all Shaw Brothers and shit-crazy for its third act, which I can respect. In other words, it delivers exactly what a movie about Nazi zombies fighting Russian zombies in some Stalingrad-redux zombie showdown promises to deliver. Impossible, as well, not to like a film that uses Bonnie Tyler correctly in a sentence. That's right: in a Titanic reference in the middle of a zombie flick--one that made me laugh longer and harder than I have at anything in months. At the end of the day, this might be the closest we ever get to a fourth Evil Dead film. Groovy.