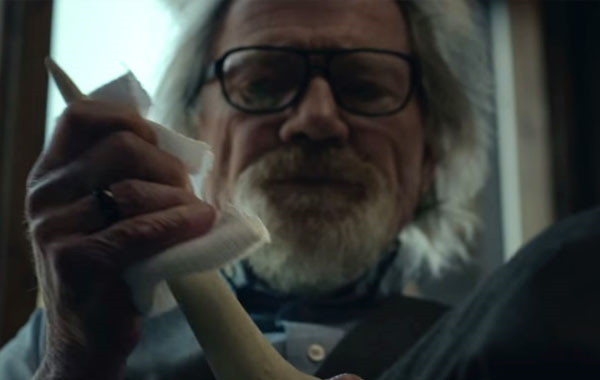 by Walter Chaw Apparently based on an obnoxious shit-shooting session from one of Kevin Smith's outrageously-popular podcasts, Tusk is Smith's The Human Centipede, sort of, in which a crazed mariner (Michael Parks), mourning a long-lost, large-land-mammal buddy, abducts outrageously-popular podcaster Wallace-sounds-like-"walrus" Bryton (Justin Long) and proceeds to surgically turn him into a walrus. Here's the thing: I always seem to like parts of Kevin Smith movies. I think he's a smart guy; I like what he likes. He's wordy and mannered but, shit, so are Whit Stillman and David Mamet. And yet, somewhere along the way, without fail, no matter how smart something of his is in the beginning (Dogma), Smith tosses in a literal shit-monster. He's puerile. He can't help it. Tusk has Michael Parks going for it--the rest of it is shit-monster. If I dislike Smith more than I dislike other people who aren't as clever as he can be, it's because every single one of his films is a missed opportunity.

Wallace is an unbelievable douche, though no more a douche than a movie that mines most of its humour from going after Canadians--especially Quebecois, in the form of cross-eyed, disgraced inspector Guy Lapointe (Johnny Depp (I know.)). Canadians like hockey, eh. Get it? As Wallace's best friend Teddy, Haley Joel Osment's transformation into uneasy pre-middle age is the film's most existential special effect, while Genesis Rodriguez as Wallace's girlfriend Ally is given the thankless task of completing a hummer-interruptus on a guy no one thinks is funny in the middle of what should have been a break-up scene. This curious, contrary misogyny where a woman is granted a voice, only to squander it on being a killjoy or a come-on, is merely another of those auteur hallmarks in Smith's exhausted repertoire of them. He has a few stakes: he ties all of his lines to them. Smith strikes this pose of universal-offender, but his identity is well and firmly that of "bro." Sitting through Tusk earns you bruises from all the knowing winks and ingratiating elbows.

Attempting to engage with Smith's "relevance" in the piece leads to a minor conversation about how social media is powerful and how assholes with a platform have the potential to cause a lot of damage. Wallace, see, travels north to interview--in a cruel, Tosh.O kind of way--a guy who's become a viral sensation through accidental self-mutilation. This is tied to the bit where Wallace talks about how much money he's making being a scatological dirtbag. As revelations go, it's not that illuminating. As self-knowing self-deprecation goes, it lands as fairly hollow, because Tusk is interested not in examination, but in exploitation. To that end, Wallace the Walrus is front-and-centre and looking like a cashew crossed with an uncircumcised penis, with the sting being that he can manufacture tears because he has a soul, man. On second thought, the auto-critical self-examination might be closer to the bone than first imagined.