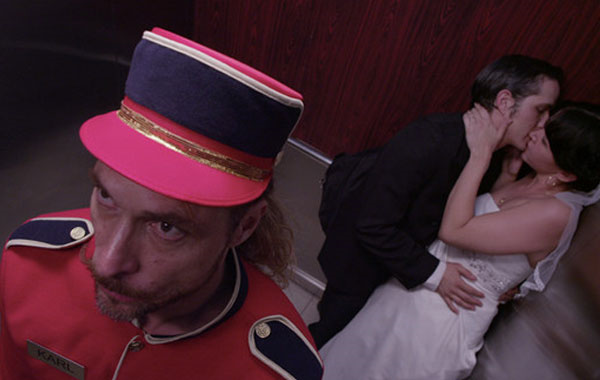 by Walter Chaw There are a couple of ideas hidden in Isaac Ezban's The Incident, packed in there amongst an impenetrable payload of dreck. It shows some promise only when it suggests William Sleator's House of Stairs, the book it most resembles when it works. Unfortunately, the book it wants to resemble is Philip K. Dick's Time Out of Joint, which, you know, it just doesn't. It's the tale of two time loops following a mysterious celestial explosion: the first strands a pair of petty robbers and their cop pursuer in an Escher painting, while the second strands a squabbling, awful family on an endless highway TO NOWHERE. Portents and signs everywhere hang low like significantly meaningful storm clouds, leading to a thirty-minute exposition--in what feels like the fourth or fifth hour of a hundred-minute film--that's delivered with the careful precision of a slow adult explaining something s/he doesn't entirely understand to a slow child. Painful? It's at least painful. Ironic, too, that this movie about temporal looping makes you a victim of it.

The idea, I think, is that you should let the past be the past lest you waste your life reliving it. Yet the message delivered, for all intents and purposes, is that you should work out and eat well so you don't get fat and disgusting when you're old. There are moments I sort of liked from a conceptual standpoint, such as the vending machine that refreshes itself. Shrines are built to abundance, religions develop, and histories are drawn on the walls in a child's hand. It all suggests a kind of wave at mythology and what a film The Incident would have been had it decided to not resolve itself in a traditional sense but instead examine what happens, really happens, in extended isolation. Frankly, to conclude with a lengthy stretch of screaming and blaring soundtrack is, after an eternity of deadening white-knuckling, exhausting. It's the twentieth hour of a road trip with an ADD-afflicted six-year-old, and you're the one asking if you're there yet. The Incident joins stuff like Primer and to a lesser extent Timecrimes among movies that have one idea they're obviously very enamoured with and proceed to grind into a self-indulgent paste.