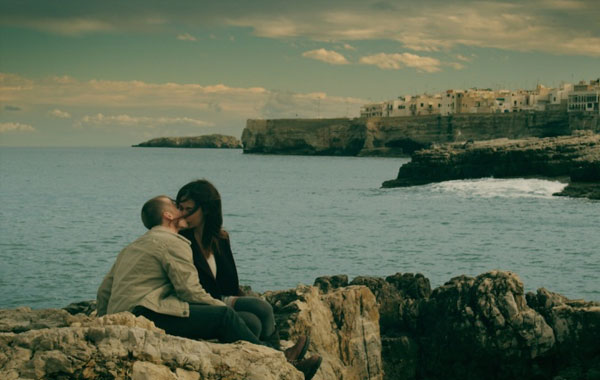 by Walter Chaw Justin Benson and Aaron Moorhead's Spring is sensitive, smart, romantic, and disturbing in the best ways. Flip to call it Cronenberg's Before Midnight, but how else to describe a warm, resonant relationship drama-cum-travelogue that happens to feature tentacles and extreme body mutations? It's a compliment. Evan (a tremendous Lou Taylor Pucci) loses his mother to a wasting illness in the same week he loses his job, so he packs it up and goes to Italy, where he encounters a beautiful, mysterious woman named Louise (Nadia Hilker) who happens to have an accent he can't place. No one could.

Spring has about it an air of Near Dark. It's a supernatural film that correctly identifies falling in love as a supernatural occurrence--a horror movie that understands there's something horrible about losing yourself to someone else. It captures the vicious arbitrariness of life sometimes while honouring the small moments of real grace that carry you over the unfathomable tragedy of the rest of it. It's really great. The bulk of Spring is given over to Evan's painful courtship of Louise as they stroll through dark, romantic streets, discussing what it means to love someone--and possibly the role of stem cells in sustaining an infinite existence. The picture understands art as a means, eternal, of expressing in equal measure adoration and strangeness, and it sees itself as part of that tradition. When Louise points to certain paintings with recognition, when she says she hasn't been to a church "since its grand opening," there's a playfulness to it the belies the seriousness of Spring's themes.

It's possible to reduce the film to Evan's need for a purpose in his life once everything else has gone away. What I think Spring is really about is meeting the person you're going to be with for the rest of your life, and how that makes everything else relatively unimportant. Evan discovers two secrets about Louise, only one of them true. He finds a needle and confronts her about being a junkie; then he finds out what the needles are for and has to decide whether Louise is going to be worth it. Spring is also about Louise's choices in this life: whether, Eternal Sunshine of the Spotless Mind-like, she should fall in love in a mortal world--if she should give up eternity for the chance to play at eternity in just a few moments. There are a lot of places Spring could have gone, and it doesn't go to any of them. It's a horror film insomuch as Let the Right One In was a horror film. Better to call it a wonderfully-crafted little gem that's unusually empathetic towards the feeling of first love, that stomach-dropping moment when you meet the person you are to meet and step off into the void.

Benson and Moorhead made a splash with their twisty meta-flick Resolution, that one another observantly-written character/relationship drama that takes on genre implications somewhere along the line. I thought it was maybe too smart for its own good--something that became an exercise at a certain point, more about being clever, I guess, than great and true in and of itself. Whatever the ills of Resolution are solved by Spring. A complete film with complex characters likely to be overlooked because of its genre elements, it belongs in the same conversation with Linklater's "Before" trilogy. It seems like the kind of thing one day destined for critical reevaluation, though its cult due will come much sooner. I can only imagine discovering Spring as a teenager; I'm glad I discovered it at all.