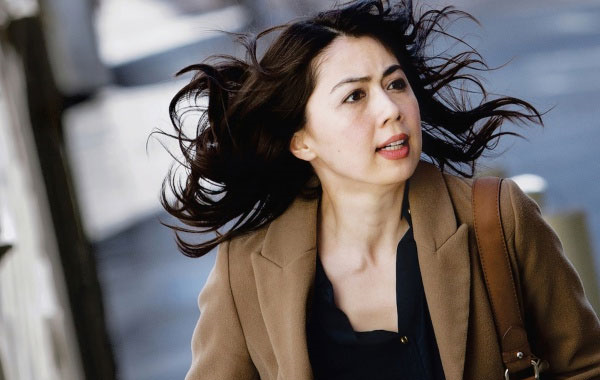 by Walter Chaw Dave Boyle's Man from Reno is agreeably mediocre. It doesn't do anything particularly badly, doesn't do anything particularly wonderfully, overstays its welcome a little, and appears to not know whether to be a Father Dowling mystery or a Patricia Highsmith novel before settling on being a bit of both. It starts with the permanent vacation of popular/reclusive Japanese mystery author Aki (Ayako Fujitani), who travels to visit friends in San Francisco, where she finds herself involved with a handsome stranger (Kazuki Kitamura) and shady dealings. Meanwhile, grizzled small-town sheriff Paul Del Moral (Pepe Serna) investigates an abandoned car and a hit-and-run, only to cross paths with plucky Aki. An unlikely buddy comedy? You bet, though one that only flowers for a moment when Aki interrogates a woman as erstwhile interpreter but actual prime-investigator while poor Sheriff Del Moral stands by, asking questions never properly translated. It's charming. All of Man of Reno is charming. So terribly, terribly charming.

Aki is a cool creation with some depth. She enlists compatriots who are also given depth, and she has moments of real complexity that I enjoyed quite a lot. I wanted more of her, less of the "Longmire" sheriff--and even less of his aggressive deputy daughter, Teresa (Elisha Skorman), who sticks out as the most stock character in a film that seems interested in avoiding them. If the story is about how Aki and Del Moral complement and somehow complete one another, I've seen that. If it's about Teresa wanting to prove something to an overprotective dad in a dangerous profession, I've seen that, too. What I haven't seen is Man From Reno's absolute matter-of-fact treatment of Japanese new-immigrant culture, or its heroine, who's a bit of a fake but smart as hell and more curious about why her heart's been broken than she is about any international law. When the film chooses instead to focus on shenanigans and nihilistic twists, it comes way too late in its protracted leisure to suddenly engage in anything existential. It's a pleasant-enough diversion for what it is and for time spent with good company; a shame that better describes a luncheon on the lake than it does a Mr. Ripley thriller.