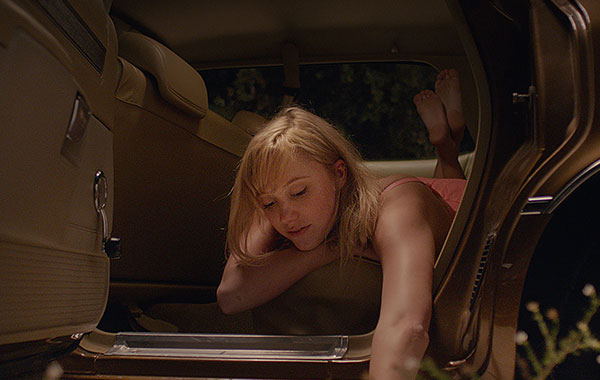 by Walter Chaw For me, David Robert Mitchell's The Myth of the American Sleepover occupies a space in recent nostalgia films alongside stuff like Adventureland or the theatrical cut of Donnie Darko. It properly identifies a certain period in adolescence as grand drama and surreal dreamscape--when everything takes on magnified import both romantic and Romanticist--and paints that world in rich, velvet strokes. Mitchell's follow-up, It Follows, exists in the same time and place, pools in the same crepuscular half-light of fading youth. It's a horror movie, it's true, and it has a bogey, sure, but what works about the film is that it's actually about a fear of experience as it progresses, inexorable and unstoppable. Its bad guy is time, should you survive--which is really, truly fucking terrifying.

Jay (Maika Monroe) is the pretty one. She wears yellow a lot, like a daisy, and like a daisy her innocence is brief. She loses it one night, to love, to handsome Hugh (Jake Weary), and wakes up tied to a wheelchair as Hugh tells her that he's "given" her something, something that walks, slowly, towards her through crowds, and walls. He tells her to never be in a room without another door and absolutely don't let it touch you. He doesn't explain how he knows this, just that he does. Jay, wracked with guilt over her poor choices, alone essentially at this juncture in her life, doesn't know what to believe. Her friends support her, her family (though we hardly see any "adults" in the film, per se) supports her, and she does all the right things after being assaulted by calling the police and going to the hospital to get checked out. We like Jay. More importantly, we recognize her for the selves we left behind.

It would be easy to identify It Follows as a film about budding sexuality like, say, Halloween, to which, in feel and score, it owes a tremendous debt. It would be easy to discuss paranoia and how the picture pays its debts to Invasion of the Body Snatchers (more the original than the others) and Stephen King's It (name-checked in the title in a way that's no accident). In the end, though, It Follows is more to me like William Blake's poetry, passionate in its base simplicity. Nevertheless, these are examinations, all, of how innocence blackens into experience, and how the horror of that happens to all of us in turn. You can't run away from it, although you can distance yourself for a spell. Poignant to me is that the places Jay runs for time to plan, to think, are beaches, mountains--traditional spots for a vacation where we go to breed a quiet space between ourselves and the pressures of life.

Mitchell places everything in a fundamental context. When the bad things happen, the "it" unfailingly resembles a parent. There's one moment involving a heroic buddy (Daniel Zovatto) that would be at home in a Cronenberg movie in terms of its perversion and implication. The title It Follows plays another neat trick: it's an invitation to a conversation about causality ("Should this happen, then it follows that..."). Indeed, the film works like it does because it inspires that very conversation: It's not about why things happen so much as it's about why those things can be frightening. It explains stuff like "the shape" from Halloween, making it the best kind of homage; it hears the music. The opening, a long tracking, spinning pan around a girl running in circles from nothing in high-heel shoes, says everything about the Italian giallo structure, even. It Follows suffers so much fruitful unpacking with elegance and a furious, infernal grace, and its ending is something so ambiguous and strange that I've been worrying it for the days since. I suspect I'll be worrying it for a while longer.