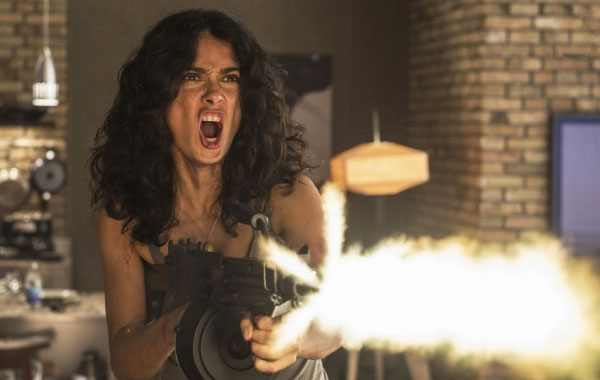 by Walter Chaw The film opens with a brutal, just-offscreen gang-rape perpetrated on hooker Everly (Salma Hayek) by a gaggle of Yakuza scumbags. Escaping into the bathroom, Everly retrieves a pistola, secreted away The Godfather-like, tries to call her mother and the daughter she's never known on her cell, and then goes all spree-killer on her tormentors. But Everly is neither a rape-revenge flick nor a declaration of feminism, really, what with its constantly declaring every single woman character a "whore" in its first half-hour. No, what Joe Lynch's reductive, big-dumb flick is, is a sub-Robert Rodriguez ripper, marking it as sub-sub-Tarantino. To be fair, it also rips off, shot for shot, moments from Sam Raimi; from Reservoir Dogs in a poor, bleeding-out schlub dubbed "Dead Man" (Akie Kotabe), who fans of "The Simpsons" will recognize as Frank Grimes; and from Luc Besson, in particular (and if you're a carbon copy of Besson, the image fidelity is a field of giant pixels at this point). There's so little imagination in the imitation, in fact, that the director himself has described his picture as "Die Hard with boobs." Classy.

There's no explanation for why Everly is so good with guns, though to be fair, none would be even remotely interesting. As the Yakuza descend at the beck of evil, monolithic boss Taiko (Hiroyuki Watanabe), Everly becomes trapped in her own apartment, complete with Mommy and an adorable moppet. Later, she's strung up in an unwatchable sequence involving Sadist (Togo Igawa) and his gimp-caged Masochist (Masashi Fujimoto). The violence is plentiful and perverse but not in the slightest bit inventive, revealing itself to be as tired and derivative as the rest of the contrivances conjured to keep Everly, literally, in her place. I hate this movie so much. What else to make of a film that has as a defining, repeated form of self-expression, the proudly-flipped bird?

Hayek is fine, I guess, in her limited way. She does what's expected of the stock action-movie heroine, ramping up her breathy delivery on the intensity meter while strutting about in tank-top and yoga pants. Everly is a leering flick: leering at violence, leering at Hayek, leering at a level of child-peril that's actually exploitative rather than suspenseful. When you threaten children in your movie enough like this, you should kill them to prove you're not just a bully. Alas, Lynch is just a bully. He lacks the courage to follow through on any of his nonsense, going so far as to loop "Silent Night" over a long tracking shot meant to build tension around Everly's ultimate survival. Everly is bullshit of the first order and the kind of thing that serves mainly to remind how exceptional a filmmaker, and philosopher, within this genre is someone like a Quentin Tarantino.