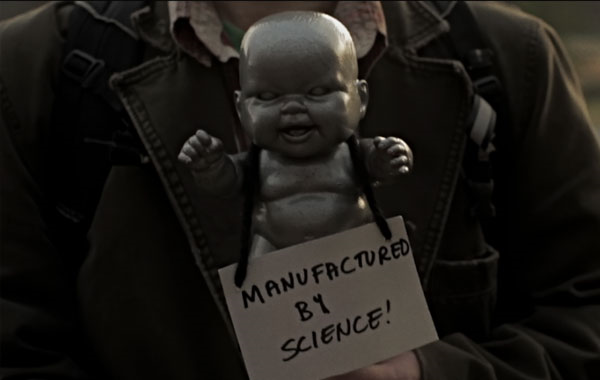 **/****
written and directed by Billy Senese

by Walter Chaw What Billy Senese's small, reasonably smart, moderately ambitious Closer to God really has going for it is that it doesn't make many mistakes along the way to becoming a pleasantly-tame Larry Cohen knock-off. The problem is that it muddies its own waters by engaging in the human-cloning debate, only to fall back on the hoary "clones are monsters" trope and concur that science is bad. Its constantly-mentioned Frankenstein's monster allegory is defeated, too, when our good Dr. Victor(-not-Frankenstein) (Jeremy Childs) turns out to have a couple of adorable moppets of his own, thus negating, generally, the read of the Shelley source material that masculine procreation is spawned by "natural" childlessness. What's faithful is the uncompromising nature of the picture's solution; a pity that its hopelessness is more a product of its missed opportunities than of any pathos generated by its execution.

Dr. Victor, it seems, has been engaging in secret experiments in human cloning, ultimately producing adorable "Baby Elizabeth" and starting a cable-news cycle around it all. Well and good, it's soon revealed that there's a mutie baby at home who's grown into a disturbed toddler, leading to some pretty effective second-half shenanigans. Lip-service is given to the wacko fundies and the pro-science liberals arrayed on opposite sides of the debate, though I can't help but wonder if the interesting movie in Closer to God is a Dawn of the Planet of the Apes-style genre exercise that uses its platform to think rather than moderately thrill. It's kind of the They Live sequel nobody was particularly clamouring for, with a wife character who's mostly a mindless nurturer without the Rosemary pathos. The show's stolen by Shannon Hoppe as an increasingly-frayed nurse, who suggests that Senese has a fully-formed film in him somewhere, something denser than Closer to God. The movie's just good enough that you suspect he could do better next time at the plate.