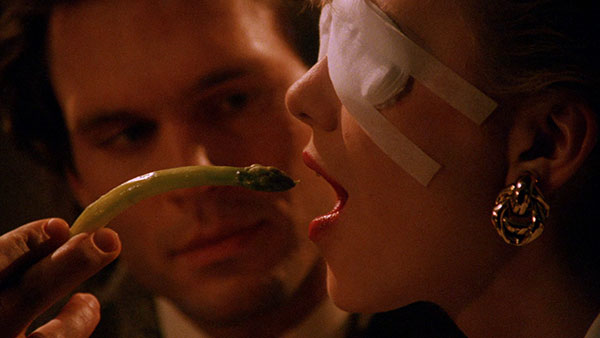 by Bryant Frazer The title sounds awkward in a not-ironic way and the 1987 copyright date suggests a cheap direct-to-video cheesefest. But director Michael Fischa is swinging for the B-movie fences from the very first shot--a Steadicam number that pans across its view of Sunset Boulevard, animated lightning bolts flashing over the Hollywood Hills, before craning down into the parking lot in front of the Starbody Health Spa. Dreamy, Tangerine Dream-esque synths well up on the soundtrack. Upon touchdown, the Steadicam glides forward towards the building as another lightning strike knocks out most of the figures on the whimsically-lettered neon sign up front, so that only eight letters remain lit: DEATH SPA.

It's a neat shot. Funny. Witty, even--particularly if it sneaks up on you when you're expecting a straight-to-VHS Z-movie. Mission accomplished, Death Spa. And yet the camera keeps pushing forward, POV-style, through the open front door, then panning gently from side to side before floating ahead into a large space furnished with exercise equipment. Lights turn off, one by one, and through tall windows at the far end of the room we see a woman. She twirls around in tights and bra top, doing a sexy little "What a Feeling" flashdance bathed in hellish reds and oranges that plays in weird counterpoint to the music's bare keyb arpeggios and swelling tones. Not just a title sequence; it's an overture.

Yes, Death Spa is a work of some ambition, with handsome cinematography by Arledge Armenaki (Disco Godfather) and post-modern production design by Robert Schulenberg (Eating Raoul). The adequate special-effects work by Wizards, Inc. gets extra juice from energetic cutting by Michael Kewley (later a producer on "Law & Order: Criminal Intent"), and the music by Peter Kaye suggests a particularly diabolical episode of "Hearts of Space". It even has engaging (not to say great) performances, especially from a creepy Merritt Butrick (Star Trek II: The Wrath of Khan), a cool Rosalind Cash (The Omega Man) as a cop, and Brenda Bakke (later in L.A. Confidential), who spends much of the film emoting with bandages covering her eyes. More importantly, Death Spa's first half is loaded with spectacle--not just plenty of gore and nudity, but also period-specific interior decoration and dance choreography. That's right: this is one or two synchronized aerobics routines away from being a full-on horror musical.

Death Spa doesn't go quite that far. Instead of actively sending up the mid-'80s fitness boom, it settles for cashing in on the trend, setting a gory whodunit in a health club owned by recently-widowed ladykiller Michael (William Bumiller). Starbody's competitive advantage is that the whole building--not only the exercise gear but the lighting and plumbing, too--is run by a supercomputer. It may also be a liability. After Michael's new girlfriend Laura (Bakke) is burned by poison gas during an after-hours sauna, the club is plagued by mechanical accidents and injuries. Suspicion falls on IT guy David (Butrick), the twin brother of Michael's deceased wife, whose programming skills keep the place running. Does David have it in for Michael and his new ladyfriend? Has Michael's paraplegic ex-wife, Catherine (Shari Shattuck, her voice overdubbed), glimpsed in startling flashbacks to her self-immolation, returned from the grave in a fit of jealousy? Or is someone else setting Michael up for failure?

Incredibly, and unfortunately, the answer is all of the above. Low-budget horror fans will find little to complain about in the straightforward first half-hour, which stacks up an entertaining series of episodic mishaps--an overpowered Pec Deck machine pushes a guy's ribs out through his torso; ceramic tiles fly off the walls of a fully-occupied women's locker room as steam blasts out of the shower heads; and, in the quickest and most brutal tableau, an unfortunate patron gets a Friday the 13th-style arrow through the back of the neck. In a truly creepy flourish, one scene features Michael's discovery of a bird's nest and what looks like a chicken fetus in his office. It's only in its overwritten second act that Death Spa gets bogged down, spending time with a pair of cynical police detectives, a paranormal investigator, and Michael's lawyer, and developing half-assed plot threads in the corresponding genres of murder mystery, ghost story, and corporate thriller. Bloodless stretches set at Michael's house overlooking the Pacific Ocean, where Laura is menaced obliquely by David, brandishing a screwdriver, play like a Hitchcock homage by way of De Palma, but without the virtuosity and/or perviness required to justify the exercise.

The scope tightens again in the film's final third, a 25-minute-long set-piece in which Catherine's jealous spirit crashes the spa's ill-fated Mardi Gras party (?!) in a bid to drag Michael to Hell so he can be with her forever. The climax boasts sustained action and some gratifyingly outrageous moments, including a death by frozen fish that must be seen to be believed, yet it's also scattershot, jumping around randomly for lack of any consistent point-of-view on the chaos that could focus a viewer's experience. Forget about suspense--Death Spa can't generate enough electricity to power a joy buzzer, let alone send a jolt through its audience.

Still, there's something unsettling about the downbeat chronicle of a ruined California dream at the movie's core, especially if you consider how Catherine's despair over her failed motherhood and disability is juxtaposed with the lascivious display of healthy women's bodies and the elaborate mating rituals that take place at Starbody. It all resonates in a way that has something to do with fitness culture, gender roles, and patriarchy. Watching Death Spa a second time, I found myself rooting for Catherine. Although this isn't supported by the picture itself, I kind of agreed with her take on things--that dog Michael probably was fucking around, despite his protested innocence. (Doesn't the gauze over Laura's eyes for the bulk of the film signify her blindness to his nature?) Anyway, I root for underdogs. And when the subject is body horror, I figure women always have more to lose. 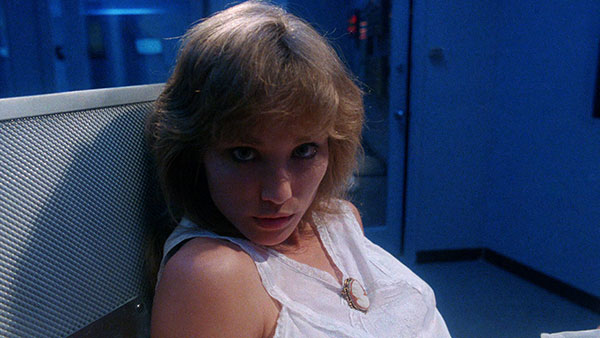 THE BLU-RAY DISC
You'd think a flick like Death Spa would be fated to languish forever in video obscurity, but MPI Media Group label Gorgon Video has rescued it from the scrap heap and given it a robust second life on Blu-ray, reportedly re-scanning the camera negative at 2K for this disc. Video is encoded at a fairly stingy average bitrate of just over 21 Mbps but quality remains surprisingly high despite a fairly thick grain texture. In this regard, the general softness of the mid-1980s film image is a blessing. Blacks are deep and inky and colours are well-saturated across the board, suggesting the picture may have been pushed a touch for extra HD pop. Artifacts are generally colour-coded, with shots dominated by deep reds (blood, flames) more susceptible to visible macroblocking and muddiness. Plenty of tiny flecks of dirt, scratches, and flicker are visible, though rarely distracting. On the whole, a handsome transfer, presented in the HDTV-native aspect of 1.77:1. This is the unrated version of the film, before MPAA-mandated cuts were carried out.

The audio isn't quite as solid. Death Spa receives a 2.0 DTS-HD MA presentation that seems to replicate the original matrixed Ultra Stereo mix. Listening to it with Dolby Pro-Logic II decoding switched on opened up a broad soundfield that made plenty of room in the surrounds for composer Peter Kaye's score. Most of the dialogue and effects are placed dead centre, although a few scenes have effects clearly panned to the left and right. The main problem with the track is a somewhat muffled quality--almost like you're listening with your hands cupped over your ears--along with a fairly high noise floor, and on close listening I thought I detected isolated flanging--characteristics I associate with aggressive digital noise reduction.

Forget about the commentary for now--it feels a little like one of those dinners you go to with a few friends who spend the whole evening discussing their mutual acquaintances whom you've never met--and head straight for the excellent documentary "An Exercise in Terror: The Making of Death Spa", which should raise the bar for this kind of endeavour on Blu-ray. Running nearly 51 minutes, it's not exactly exhaustive, but it does look at the production from many different directions. The master of ceremonies here is obviously producer Jamie Beardsley, who speaks knowledgeably about the movie's origins with uncredited producer Walter Shenson, who enjoyed sizable annuities from his role as a producer of A Hard Day's Night and Help, as well as the actual production and difficulties in post. Also weighing in are cinematographer Arledge Armenaki, actors William Bumiller, Hank Cheyne (the Beta/VHS guy), and Shari Shattuck, screenwriter Mitch Paradise, production designer Robert Schulenberg, editor Michael Kewley, composer Peter Kaye, production coordinator David Reskin, and even Steadicam operator Elizabeth Ziegler. The Death Spa archives were opened up for this feature, including pages from an original James Bartruff screenplay that got a complete rewrite by Paradise, behind-the-scenes photography, and video footage from the set. Beardsley remembers lessons learned, Armenaki and Ziegler talk about executing the opening shot (and Ziegler throws some shade in Stanley Kubrick's direction), Schulenberg talks about taking design inspiration from the Memphis Group, and most everyone talks fairly frankly, thank the maker, about their feelings on the entire production. The money quote probably comes from Reskin, who says, "It was a wonderful and horrible experience." It's lively, enjoyable stuff.

Curiously absent from the making-of party is Fischa, who apparently remained at home in Austria while the interviews were being shot in L.A. and North Carolina. He does contribute, with producer Beardsley and editor Kewley, to the audio commentary, speaking "via satellite," but complains repeatedly that he's seeing only a low-quality version of the film. (At one point, he bemoans his crummy stream, muttering, "It's a very bad picture," and there's an awkward moment where his co-commentators naturally assume he's referring to Death Spa itself before he clarifies, "No, no, no, it's not a bad picture--it's a fantastic picture!") This is a standard-issue yakker with lots of reminiscing and gossipy tidbits. Kewley does pipe up with occasional observations about various editing tricks, and remembers the job fondly as "my first feature where people wore clothes." The documentary is ultimately a much more efficient use of your time.

The remaining extras are a cheesy two-minute video trailer (presented in its native SD and pillarboxed to 1.33:1) and a more effective one-and-a-half-minute theatrical trailer (transferred from 35mm and presented in 1.77:1 widescreen). (If you raise an eyebrow at the idea of a "theatrical trailer" for Death Spa, well, you're not alone--but Beardsley says in the doc that the film did get a theatrical release. If I had the wherewithal, I might investigate that a little further, but it could take a while to figure out when and where a theatrical engagement may have taken place. IMDb pegs Death Spa as a 1989 release, apparently based on its Japanese video premiere, while the MPAA says the film received its R rating in 1988 and the film itself bears a 1987 copyright. Cinefamily screened a copy earlier this year, describing it as "the world's only uncut 35mm print," so I assume R-rated release prints have been in circulation.) 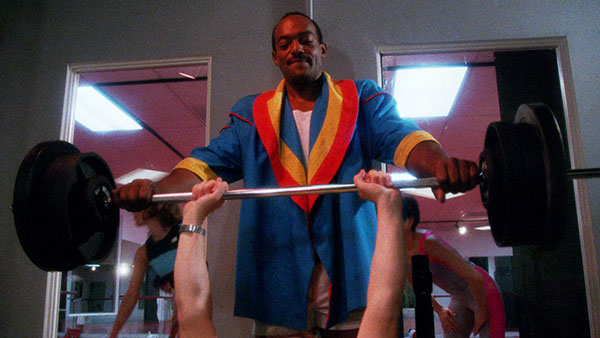