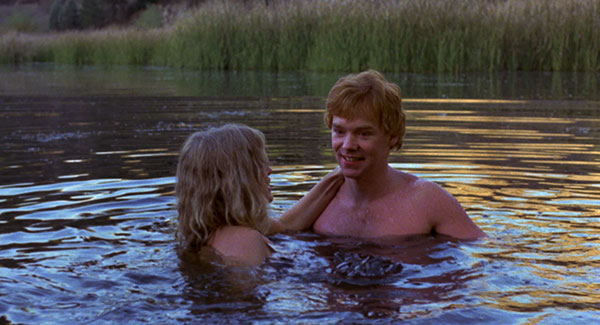 by Bill Chambers A slasher movie in spirit, Greydon Clark's Without Warning sure opens like one, in that some cannon fodder is swiftly dispatched to establish the bogeyman and the threat he represents. But instead of the typical frisky coeds or vacationing couple, the first victims are a father (Cameron Mitchell) and his adult son (Darby Hinton) on a hunting trip, and their dialogue is freighted with an impressive amount of history and subtext. The son is rudely awakened at the crack of dawn by his angry father; he proceeds to criticize the taste of the local water, which the father stubbornly hears as girlish griping rather than the anvil it actually is. Though they're archetypal opposites (the Great Santini and his sensitive offspring), the son does try to call a truce of sorts and is soundly, sadly rebuffed. The father's macho anti-intellectualism--the boy brought books on a hunting trip!--makes theirs an unbridgeable generation gap, and there's an unsettling moment where he trains his rifle on his son, sniper-style, before thinking the better of it. Then suddenly the father is attacked by flesh-eating disks that burrow into his skin, and what can he do except cry out for his kid, who soon suffers the same tragic fate.

The stark resolution of this subplot is achingly bittersweet, the stupidity of it be damned. Without Warning neither pursues nor achieves this kind of pathos again, yet it consistently tweaks convention, plays with tone, and defies expectations, at least of its own watchability. It does that '80s horror thing of casting character actors who've reached "killer-on-'Columbo'" vintage (including frequent fliers in the genre Mitchell and Neville Brand) but finds a use for them beyond novelty villain or red herring, with Martin Landau and Jack Palance paying off early cameos to become the de facto stars of the thing and "F Troop"'s Larry Storch popping up as a doomed Cub Scout leader. Introduced singing a competing religious hymn over the scouts' rendition of "99 Bottles of Beer," Storch's troop head blunders through a line of bullshit about the "Guapo" tribe and warns the kids not to touch rattlesnakes because they "carry germs." Then he sends them off to forage for souvenirs while he pokes around for signs of civilization and struggles to light a cigarette sans match in a way befitting the expert survivalist he so clearly isn't. It's another oddly compelling vignette--again, the film betrays an unusual confidence in subtext, along with an equally unusual interest in characterization, and this helps deflect our attention from the fact that those disks soar through the air on visible strings.

In that same sequence with Storch, we learn that the albino alien--a Rick Baker spin on the Balok puppet from "Star Trek"--spares the lives of children; horny teens are not so fortunate. For a while, Without Warning turns into a standard-issue dead-teenager flick, albeit one with a pricelessly inapt title: Final Girl Sandy (Tarah Nutter) and her cohorts Greg (Christopher S. Nelson), Beth (Lynn Thell), and Tom (li'l Davey Caruso, in satin short-shorts) are repeatedly, vehemently warned away from the remote lake where they set up camp. Beth and Tom have sex and therefore die, sending blind-daters Sandy and Greg fleeing to the local watering hole, where they get the sort of friendly reception reserved for tavern interlopers in Hammer horror. Still, their fantastic tale resonates with two tough old bastards: Landau's paranoid army vet Fred "Sarge" Dobbs--the rather blunt Treasure of the Sierra Madre allusion distracting in a movie that's derivative but not especially referential--and Palance's game-hunter Joe Wilson, who's figured out that this visitor from outer space has only come for sport and seeks to hoist it on its own petard. In other words, Without Warning is Predator in utero (the late, great, 7'2" Kevin (Peter) Hall wears the alien suit in each)--though try telling that to Dobbs, who becomes increasingly convinced he's trapped in Invasion of the Body Snatchers.

Palance seemed more comfortable wearing Armani in the '80s as the host of "Ripley's Believe It or Not" and a Machiavellian mastermind in Batman and Tango & Cash, so it's a kick to see him here unkempt in flannel and not playing the heavy for a change. Comically intense as always, but not the heavy. Although Sandy and Greg manage to make a love connection that is poignant in the peculiar way that maniacs-on-the-loose bringing people together is always poignant, the film swapping out Greg for Joe is somewhat ingenious, in that it creates a more novel, less predictable character dynamic as Sandy warily tags along with this deeply rural stranger. What Joe lacks in dreamy Robby Benson good looks he makes up for in mystique: For reasons tantalizingly unexplained, he's able to pry the alien's deadly disks off his body before they do any critical damage. (Maybe he's the only one who thought to try.) For pure schlock poetry, you can't beat the moment where Palance charges towards Hall's stoic menace wailing "Alien! Alien!" Indeed, when you stop to consider the number of variables that had to line up to make this tableau possible, it feels even more magical and precious.

Landau's showier role gets the most out of both his Actors Studio training and impulse towards ham, but the movie's secret weapon is DP Dean Cundey, who refined a subjective horror grammar in his collaborations with John Carpenter that is put to good use--well, use--here. Cundey goes for the gusto in a silly yet effective sequence as Greg and Sandy investigate various foreign noises inside an abandoned cabin, ratcheting up the tension by drifting in and out of a panaglide POV. He also employs the Michael Myers stalker-cam for the alien, a creature rarely if ever seen walking on camera, but no matter. Just as the appearance of Cundey's name alone in the opening credits will give genre fans a homey feeling, his compositional sense lends the picture an unmistakable touch of class. Without Warning has a lot of credibility for something that can be so shamelessly risible. 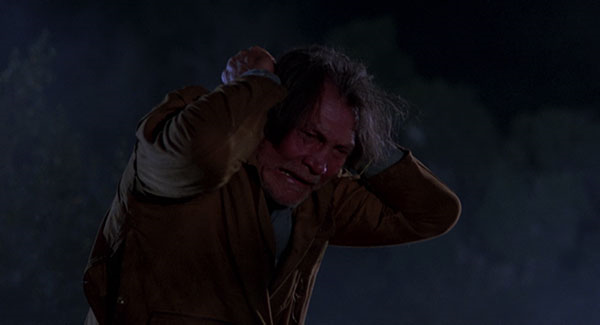 THE BLU-RAY DISC
Scream Factory's Blu-ray/DVD combo release of Without Warning is a real coup for the label, as it marks the picture's official home-video debut. The 1.85:1, 1080p presentation is, alas, unspectacular, with clumpy grain, blacks that veer between dense and watery, and thick, purple-suffused colours; the blue sky in the prologue dances with particulate that almost suggests digital noise. Fine detail is adequate--the movie is unquestionably in focus. I'd be interested to know the provenance of the source for this master, which is clean though not without pinhole-type artifacts. The transfer definitely looks a few generations removed from the negative, but the good news is it looks at least as good as the release print at a bargain theatre would have back in the day. A 2.0 DTS-HD MA mono track is surprisingly juicy within obvious limitations of age and budget--a paltry $150,000 according to producer-director Clark's feature-length commentary, $75,000 of which went to Palance and Landau. Low-key but affable, Clark goes on to praise those two men and diplomatically characterize Caruso as being full of ideas. He begins to run out of gas following a loquacious start, but not before noting that the version of Without Warning we're seeing is technically the director's cut: When it was first distributed, some exhibitors took it upon themselves to snip Landau's introduction out of the film. Clark doesn't say why.

A prototypical line-up of video-based extras from Michael Felsher's Red Shirt Pictures kicks off with "Greg & Sandy's Alien Adventures" (21 mins., HD), in which now-grizzled actors Nutter and Nelson describe the disparate journeys that led them to Without Warning. Nutter says she studied Method acting under Jeff Corey and Nelson admits she was the first actress he'd ever worked with who considered her character's interior life. The anecdotes from the set, like how Nutter brought down four walls with the power of her scream, are interesting but oddly joyless in their delivery, unlike producer/co-screenwriter Daniel Grodnik's recollections in "Producers Vs. Aliens" (11 mins., HD). There, Grodnik talks about how reluctantly tagging along with a girl to her film class led to him studying cinema at UCLA, after which he did what every struggling producer in the late-'70s did and devised ways to capitalize on the success of Star Wars. He claims to have paid Rick Baker $19,000 to sculpt the alien head. If you're doing the math, that's $56,000 Clark was left with to get something in the can.

"Hunter's Blood with Greg Cannom" (6 mins., HD) is a pleasant but hardly revelatory stroll down memory lane with makeup artist Cannom, one of the film's most successful alumni. Lastly, the essential "Independents Day with Dean Cundey" (15 mins., HD) sees the veteran cinematographer jovially reflecting on his five-film partnership with Clark. By the time of Without Warning, their final collaboration, Cundey was in demand at the studio level but felt he owed Clark, and saw the picture as an opportunity to further hone his craft out of the glare of the Hollywood spotlight. Cundey reveals a trick for lighting forests at night when there's little money or equipment to do so that is flat brilliant and, in my estimation, key to his aesthetic. He also says he stopped doing his own Steadicamming after it gave him a hernia! Rounding out the special features, a step-frame gallery of production stills, as well as a compressed-looking VHS dub of the theatrical trailer. Capping the disc is a selection of Scream Factory previews for I Come in Peace, Motel Hell, The Beast Within, and Schizoid. 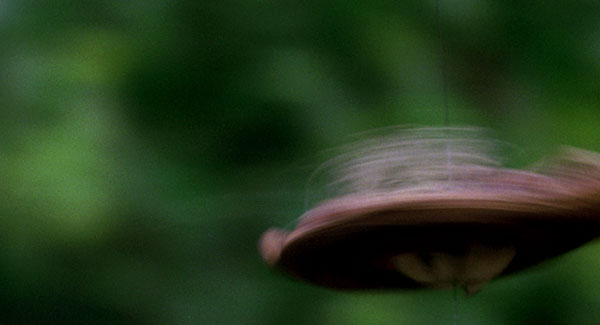