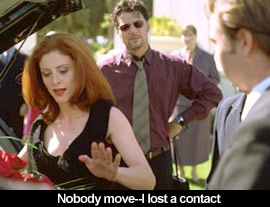 by Bill Chambers Last year's admirable ode to grief Moonlight Mile was given an injection of freshness by the cruelly luminous Ellen Pompeo, but in the end, the chaos the film depicted seemed too straightforwardly resolved. Australia's Walking on Water, which likewise explores the aftermath of an untimely death (thus finding itself plum in a new niche market with Moonlight Mile and the cable phenom "Six Feet Under"), isn't as entertaining as Moonlight Mile, but nobody in it can say one thing that will fix everything, and, boy, is it well observed. The picture is little more than--yet sufficiently--a medley of grief gestures (as screenwriter Roger Monk has remarked, "No two people react [to the death of a loved one] in the same way"): some joshing (praying for reincarnation to spare the departed from coming back as a "poof"), others piercing (kicking a mourner out of the wake for crying too loud), all coalescing into a gripping and mildly devastating viewing experience.

Walking on Water opens with the sight of Gavin (David Bonney) puking his guts out in the final, agonizing stages of AIDS. Having bid goodbye to his mother (Judi Farr) at last, he wants to be euthanized under the supervision of best friends Anna (Maria Theodorakis) and Charlie (Vince Colosimo). As Gavin lies fading from an intentional overdose of morphine, an impatient Charlie suffocates him with a plastic bag, a moment played first for squirmy laughs, then for wrenching melancholy, Gavin's death rattle a sad stroking of Charlie's cheek. (The taciturnity of the film's characters is so successful in making us repress the particulars of this sequence that its emotional payoff bushwhacks us later on.) Anna then seizes control of Gavin's affairs, rousing suspicion and hostility as she does everything according to how she and Gavin allegedly "discussed," including confiscating the baby's breath from the flower-arrangement atop his casket; Charlie torpedoes his relationship with live-in lover Frank (Nicholas Bishop); and Gavin's brother Simon (Nathaniel Dean) engages in a cathartic extramarital affair.

Anna becomes the object of venom from Gavin's mum, who feels supplanted in her life's role (the honest thing about their scenes together is the lack of histrionics--they mutually attempt to remain civil to each other while being less than deferential), and from Charlie, who also resents Anna's proprietary behaviour. Yet Anna, Charlie, and the rest receive equal empathy from the filmmakers, whom it would appear are incapable of playing favourites--a commendable trait, even if it neutralizes the picture's visuals until shots lack a point of interest. Still, Monk and first-time director Tony Ayres pull off a neat trick in incorporating elements of dark or just plain comic wit without letting the air out of the picture: A naked man using a mewling cat to hide his privates would sound atonal, but it's another thoroughly sincere ministration in a carousel of humanity. Originally published: August 22, 2003.