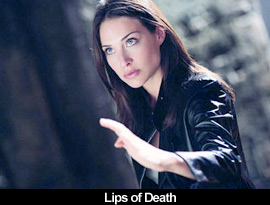 by Walter Chaw I think it's fair at this point to say that I'm no longer so much a Jackie Chan fan as I really like a few Jackie Chan movies. His career has taken a rather conspicuous downturn since he reintroduced himself to Hollywood almost a decade ago, just after his last great film Drunken Master 2, scraping and bowing and remixing a few of his Hong Kong hits with English-dubs (and why is it that Asian films are the only ones consistently re-voiced for North American release?) and consenting to play ethnic Kato caricature to a string of Yank comedians for inexperienced directors and that screaming idiot Brett Ratner.

This is not to say that most of Chan's hundred-plus films are really worth much of a damn, just to suggest that Chan's long-time dream of conquering the North American market has come at a pretty high price for not only Chan, but also for an Asian market that saw Chan at one time as a national treasure and a source of cultural pride. Looking at the Chan who stars in The Medallion, a mugging, inward-admiring shadow of the gifted physical comedian who prompted more than one critic to consider him the heir apparent to the Buster Keaton legacy, is an exercise equal parts disheartening and unbearable. It's what happens when an artist forgets his strengths, reads his own press, and like a dusty old professor entrenched in tenure, publishes the same text every year or so to the bemused indulgence of a quickly fading following.

Eddie (Chan) is a Hong Kong cop teamed with bumbling Interpol agent Watson (Lee Evans--if I never see him in another film again, it'll be too soon) and cute Interpol agent Nurse Grimace (Claire Forlani) on the trail of warlock Snakehead (Julian Sands) and Golden Child Jai (Alexander Bao). Everyone has backstory: Eddie and Watson used to be partners, possibly just in the stupid prologue, but it's hard to say; and Eddie and Nurse Grimace (actually, the character's name is "Nicole," but "Nurse Grimace" is so much more expressive, non?) used to be lovers or something--the idea that everyone having backstory might lend the piece some fullness only one of a collection of miscalculations. After some murky, sped-up action in the first few minutes, the picture takes a break for about thirty minutes or so while Eddie, Nurse Grimace, and Watson dance and karaoke to "Twist and Shout," then some falderal about the titular bauble granting invulnerability and other super powers to the recently deceased-then-resurrected kicks in, leading to a few "The Greatest American Hero" hijinks that were more sophisticated in, well, "The Greatest American Hero". Look at what's happened to Chan, I can't believe it myself.

When, through trickery, you can make Forlani and Evans look like martial artists, it begs the question of why the world needs a Jackie Chan other than to provide the means through which a white American audience will forgive the dreadfulness of the picture. Giving The Medallion a break because it's Chinese--and it appears that at least half of the picture was shot in Cantonese and then looped with English dialogue--verges dangerously on the racist belief that Chinese people will like this picture because Chinese people like garbage. Trimmed from an unimaginable two-hour running time to an anaemic eighty-five minutes, obliterating a few scenes glimpsed in the trailer in the process, The Medallion is the kind of movie that heals clothing as it heals bullet and stab wounds (see also: League of Extraordinary Gentlemen), rips off Labyrinth in one of the most peculiar thefts in film history, and scores some fairly violent bloodletting with a whimsical slide whistle--whoops! A deer antler just impaled you! (Watch for revered Chinese leading man Anthony Wong in a few humiliating scenes, probably here for his relationship to director Gordon Chan and their excellent film Beast Cop, to really ramp up the irritation.) There are no interesting ideas in the picture, no decent fight scenes unencumbered by bad camera placement, obfuscating editing, and distracting wire-work (all the more surprising given that Sammo Hung was enlisted as action director), and no performance nor line that doesn't set teeth on edge. The only moment worth looking at is one where Chan drowns while putting on a brave face--not for its effectiveness within the film, but for its effectiveness as a pointed commentary on the artist at this point in his career. Originally published: August 22, 2003.