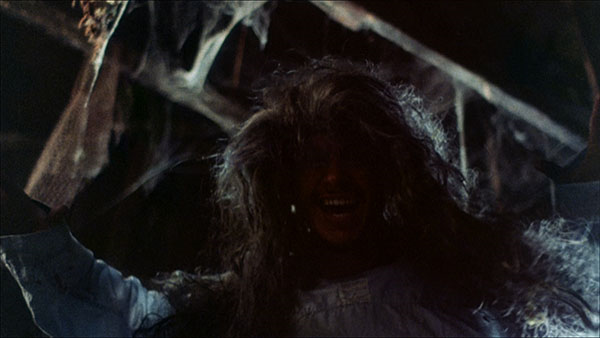 by Bryant Frazer Of all the lousy, Z-list horror films that flooded American multiplexes in the wake of the success of Friday the 13th, The Final Terror may have the most incongruously A-list IMDb profile page, which explains its failure to languish in well-deserved obscurity. It is exemplary of the 1980s horror boom as opportunistic folly--horror movies were being made by people who had no interest in making horror movies, simply because that's where the easy money was. Horror buffs know this, but still, how can any self-respecting 21st-century genre cultist resist the siren call of a little-known slasher starring Rachel Ward, Daryl Hannah, Mark Metcalf, Adrian Zmed, and Joe Pantoliano and directed by Andrew Davis?

Davis was a cinematographer looking to graduate from low-budget obscurity to the big leagues when co-screenwriter Ron Shusett (Alien) convinced producer Joe Roth (who would go on to become a very big deal) that he was the man for this killer-in-the-woods flick under the care of Samuel Z. Arkoff, who had helped define the American B-movie in his decades at legendary exploitation outfit American International Pictures. Even the below-the-line talent--film editor Paul Rubell (later to do Oscar-nominated work with Michael Mann and highly lucrative jobs for Michael Bay), three-time Oscar-winning sound guy Michael Minkler, casting director Penny Perry, among others--turned out to be world-class. Davis managed to turn the gig into one hell of a career, eventually landing action projects like Above the Law, Under Siege, and The Fugitive. But The Final Terror is a lifeless hulk.

It's about a gaggle of forest rangers from the Wild River Fire Base who head out on a multi-day work detail with some kind of ill-defined mission devised by the group's leader, Mike (Mark Metcalf). Around a bonfire on their first night away, one of them tells a sad, spooky story of a teenaged girl, her lumberjack uncle, an unhappy child, and a rape in the woods. Stage thus set, the film waits for two of these kids to start humping by the water's edge before sending in the boogeyman--in this case, all we see is a gloved hand wielding a wickedly-curved blade and slashing Mike's backside, mid-thrust, spattering girlfriend Melanie with his blood. Meanwhile, weirdo Eggar (a tightly-wound Joe Pantoliano) has disappeared, and wherever he's gone, he's taken the group's rickety bus, their ticket back to civilization, with him. It's a little while before the group realizes they're being hunted (the discovery of Mike's severed head in an outhouse crystallizes the picture), but before long the unhappy campers are just hoping to find a way out of the woods before the killer catches up to them.

As horror-movie set-ups go, that doesn't sound too bad, but The Final Terror doesn't do much with it. Sure, there are hijinks, like the early scene where Marco (Adrian Zmed) is tricked into howling like a wolf for hours on end. The performances aren't bad, and I liked the working-class bickering of the early scenes, which feels of a piece with similar exchanges in Alien (even if the post-sync'd dialogue is painfully apparent). But your garden-variety slasher movie passes the time with sex scenes and murder scenes, both of which are withheld here. Nudity is strictly limited to Metcalf's bare ass (and, if you're watching closely, a glimpse of underwater full-frontal), and the film is similarly circumspect about gore, with only the previously-described coitus interruptus and another moment when somebody gets his ankles slashed really registering on the cringe-o-meter. (A couple more moments might be worth a jump under the right viewing conditions.) What you get instead are long minutes of people walking through the woods, stumbling around in the dark, and rafting down a river.

So Davis seems to have tried to make a straight-up wilderness survival story, which might have been interesting. Yet The Final Terror is never more effective than it is in its incredibly stupid, badly- staged and photographed opening sequence--tacked on to the picture without Davis's knowledge and against his wishes--in which a young couple with no backstory gets efficiently sliced and diced. (The woman is taken out by a trap made of tree branches and tin-can lids that is sprung at the camera in first-person POV mode.) That's not a good wilderness survival story, but it is a pretty good slasher-movie overture, which the rest of the film follows up with a whole procession of false scares interspersed with a couple of glimpses of the titular killer, who appears to be clad in a fright wig and an oversized grandma sweater. Now, I don't doubt for a second that Davis was trying to make the best, most respectable movie he could from the material. Ironically, though, The Final Terror probably needed a less talented director, one who had no scruples about using all available resources to execute a sexy, bloody, and completely disreputable teen-scream picture. 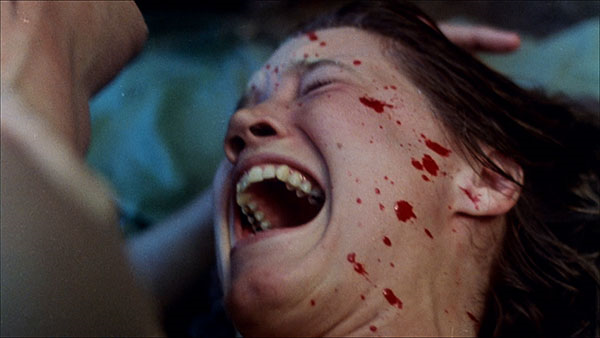 THE BLU-RAY DISC
The Final Terror has been so thoroughly forgotten that Scream Factory's new high-definition home video release was sourced not from the camera negative, which is missing, nor from intermediate or dupe elements, which could not be located, but from an array of six different release prints that were in the hands of private collectors. The image is surprisingly good, given its provenance, with chunky film grain and the bonus of an old-school R-rating card at the start of the movie. Don't get me wrong--there are also big problems with the 1.78:1, 1080p transfer, like a largely-unchecked issue with flicker owing to apparent density fluctuations in the elements throughout much of the film (but by no means all of it). That could be attenuated, probably, if enough money were thrown at it. Black levels fluctuate pretty wildly and much of the shadow detail appears lost to the ages, a problem for a film that employed so much low-light cinematography. A bigger disappointment may be that Scream Factory was unable to restore a few seconds of footage snipped from Metcalf's death scene before release in order to secure an R rating. One of the versions of The Final Terror available on YouTube includes the scene in its entirety, and it's a bit more upsetting and effective.

Audio quality is fine, especially for a monaural DTS-HD MA 2.0 track apparently rescued from optical tracks. Dynamic range is obviously limited, and some crackle is occasionally audible, but the original recordings and the unusual musical score (more on that later) generally sound clean and well-preserved. A fairly generous bit budget (averaging 38.4 Mbps) means the extra features push this onto a dual-layer Blu-ray platter, a combo pack that bundles the disc with an identically-configured DVD version.

Switching to the director's commentary sheds some light on the movie's problems. Outside of a few lively passages where he offers anecdotes about the actors he assembled for the film, Davis comes across as mostly uninterested in the proceedings, if not disdainful of anyone within the sound of his voice. You can almost hear him working the pump on the Purel bottle as he winces at the appearance of the picture's sex scene, expressing relief that he "never had to do this again." And then, when the requisite slashing begins, he groans, "I guess this is why people see these kind of movies. I don't know. I don't make 'em anymore." Don't get me wrong--Davis is an intelligent filmmaker (and a more-than-decent director of photography, working here under an assumed nom de camera), and I give him all kinds of credit for bothering to show up, even if he doesn't have much of interest to say. Photography nerds will get something out of his discussion of low-budget cinematography, such as the limits of the slow stocks in use at the time--helping to explain why so many scenes in the film look so dark. Alas, this track has more dead air than any I've heard in a long while, suggesting not only that Davis doesn't remember a lot about the shoot, but also that he doesn't have anything to say about the movie itself--and that lack of interest absolutely permeates The Final Terror.

Further insight comes from the lead HD featurette, "Post Terror: Finishing The Final Terror", which runs a generous 23 minutes. Allan Holzman, credited as executive in charge of post-production, explains that he was brought in to re-edit the picture for release after it sat on the shelf for a couple of years. Holzman says he was never a big horror buff, although he had experience working with Samuel Z. Arkoff and Roger Corman ("I had saved Battle Beyond the Stars in the editing room," he says) on the types of films that set him up to deal with a problem genre movie. "[The Final Terror] was a horror movie without a lot of kills," he recalls. "It was playing slow...and the make-up on the monster wasn't the best. And you saw everything--you saw torture...and it wasn't fun torture. It was really hitting you over the head with it." It's interesting to imagine what The Final Terror may have looked like had Holzman left in all that un-fun torture, since the grim final act, with the goofy campers suddenly decked out for guerrilla warfare, plays as though their ordeal had been way more gruelling than it actually was. Holzman also hired electronic musician Susan Justin, whom he knew from her work on the Corman-produced Forbidden World, to compose the score, and she shows up on screen to give an engaging talk in which she describes instruments like the blaster beam, a long metal cylinder strung with piano strings, that creates an eerie stinger for some of the kills. Not to mention her own voice, hair-raising when deployed as a howl.

Then there's "The First Terror with Adrian Zmed and Lewis Smith," running just over 16 minutes and featuring reminiscences by the actors about the Oregon shoot. They appear to be genuinely fond of the film, offering multiple testimonies to Davis's double-duty skills as director and DP. Zmed talks about his history on Broadway and in TV sitcoms prior to his dramatic debut in The Final Terror, while Smith remembers the picture as his first job outright. Amusingly, Zmed, too, insists that he is not and has never been a fan of horror movies; Smith throws his hands up and claims he was so green at the time that he didn't even know what a genre was. Both remember having fun on location, at least until the weather turned uncomfortably cold and wet. "If you complained you'd lose a few lines," Smith says. "Andrew Davis and Joe Roth had zero tolerance for ungratefulness." Zmed finishes the short by taking a shot at gory horror movies in general, venturing that Davis's decision to leave more bloodletting out of the picture was a "more artistic" move. Every complete feature film--the dross no exception--represents a massive human undertaking, and Zmed and Smith highlight the effort that went into this one. A nine-minute slideshow of quality behind-the-scenes stills provided by Davis himself goes farther yet, highlighting the waterlogged conditions under which many scenes were shot.

Finally, there's a two-minute theatrical trailer in surprisingly good shape, promising "an unholy tale of an unknown force, alien to this world." Though this overstates the offering substantially, it does give a sense of the pressure that was on any widely-distributed genre film in the early 1980s to deliver mind-blowing scares way out of proportion to what could be accomplished on a low budget. Having watched this unscary, cheerless thriller while slipping into increasingly soporific states of dismay and ennui, I couldn't tell you what the appeal is in 2014, other than pure nostalgia. Still, if you're going to do The Final Terror on home video, you may as well do it right, and Scream Factory gets most of the way there. 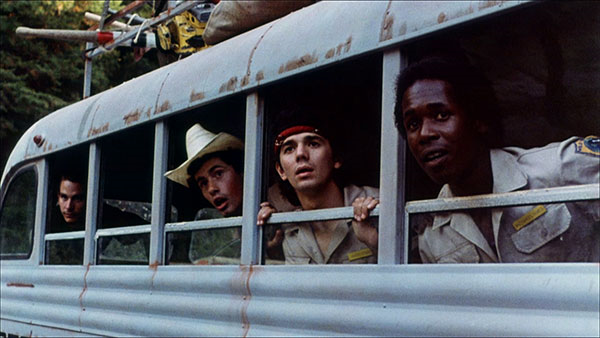