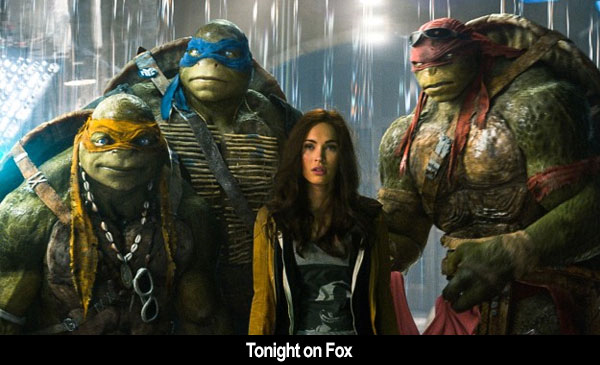 by Walter Chaw Jonathan Liebesman's brutally awful Teenage Mutant Ninja Turtles is a Michael Bay co-production in conjunction with kid's basic-cable network Nickelodeon, meaning it's a PG-13 piece of shit aimed at preteens that packs a payload of sexual objectification, mild torture, and assorted grotesquerie. That's really all there is to say about it. It implies bestiality in the constant come-ons aimed at Bay's favourite target (Megan Fox) by a foul-looking monster, then makes a joke out of a human counterpart staring at her ass while she's dangling out a car window. Best is the moment where one of the monsters declares Ms. Fox to be "so hot I can feel my shell tightening," which comes just after she's equated with a "sexy bird," because birds are slim animals as opposed to fat animals like pigs and cows. Later, Whoopi Goldberg appears as that Cabbage Patch doll you didn't get for Christmas because you're going to a Michael Bay-produced movie advertised on a children's cartoon channel, and one of the bad guys instructs his henchmen to "drain every last drop of blood" from our heroes, "even if it kills them."

It's bad, yes. It's bad for people who like these characters because it destroys their mythology, such as it is, replacing it with some Darkman crap and an origin story involving intrepid reporter April (Fox), as a child, saving rat Splinter (voice of Tony Shalhoub, who, although he played an actor who played an Asian in Galaxy Quest, is not Asian) and the titular quartet from a burning lab. Yes, it's Episode I's "thank the maker" garbage ported over complete with the midichlorian blood-contagion stuff, with a reference to Jedis to seal the deal. It's not just bad, in other words, it's also derivative--not that you'll be paying much attention when Liebesman and company proceed to actually drain all the heroes' blood, forcibly, through plastic tubes as they're stretched out in cruciform. Gruesome? It is. And bad, it bears mentioning again, featuring a chief baddie in Shredder (Tohoru Masamune) who's a stupid variation on the adamantium samurai from The Wolverine: needlessly menacing and dispatched via a couple of vicious stabbings, then a long fall from a great height. You know, for kids.

Teenage Mutant Ninja Turtles is disappointing as well for people who like internal logic (because the Matterhorn isn't within five minutes of Manhattan), continuity (because April's dad isn't shot like William Fichtner says he is), action movies (because it's not exciting), or quality (because it moves with the antic, insufferable improvisational rhythms of The Goonies). The only thing that can be said for it, in fact, is that for as terrible as it is, it probably could have been worse. Sure, Splinter looks like something out of a Cronenberg film. Sure, there's a shocking scene of a henchman murdered by a toxin that causes his skin to burn and suppurate wetly. But at least it doesn't have Fox in short-shorts walking upstairs in slow-motion to an Aerosmith song while an alien threatens to rape her and someone else calls her a "bitch." In short, Teenage Mutant Ninja Turtles is an ugly piece of work, but it's only produced by Michael Bay, so his poison is a little diluted. In order to create the men who will one day consume Bay's garbage, after all, it wouldn't do to stifle them in the cradle. Start 'em off gentle with the "hot chick" and the "baby;" the tentacle rape, overt racism, and getting urinated on will come soon enough.