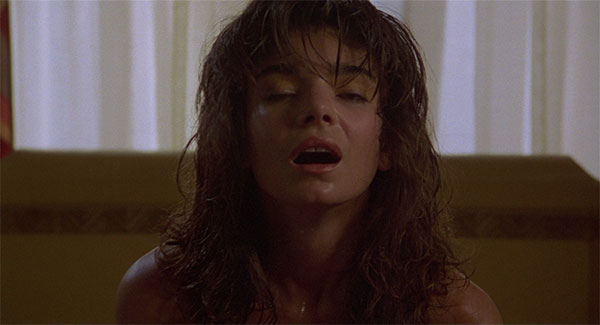 by Walter Chaw Appearing in 1989 at the very end of the blockbuster decade and on the cusp of a digital revolution, Steven Soderbergh's micro-budgeted sex, lies, and videotape heralded a doomed renaissance in independent film that would find it melded, ultimately and inseparably, with mainstream concerns. It posits that people only tell the truth when they're captured on celluloid--that when the video camera starts running, the assumption of roles begins. By the end of the '90s, precisely a decade later with American Beauty, there's another character with a video camera, but in that one, everything has turned: the lies are on film, and the truth is digital. (See also: Michael Almereyda's endlessly rewarding Hamlet (2000) and the still-incomparable The Blair Witch Project (1999).)

In between, there are bellwethers of that metastasis. First Terminator 2, trumpeted at the time as a sequel so long in the making because James Cameron was waiting for it to become technologically possible (a refrain he'd recycle for Avatar and, one presumes, its next three sequels). Then Forrest Gump and its pillaging of our visual history as captured on film, then Cameron again three years later with Titanic, which resurrected a phantom just to confirm that cheap teen angst is the only constant to tragedy, even atrocity. One could argue that this transformation is inevitable--that film began as a completely malleable, entirely corruptible medium and so ends that way, quivering out its last on the end of a digital spear. One could argue more compellingly that film was never reliable, for it never was. One could also say that without this d/evolution in production and now projection and distribution, miracles like the superhero age in our films--like Middle-earth, for instance, or Pixar--could never have happened, and that this would be a great loss to the cultural diaspora. All that's true, I guess; never mind the corruption of faith such absolute manipulation allows.

Back at the beginning was sex, lies, and videotape. Produced on a shoestring, winner of the Palme d'Or at Cannes, and as influential as Tarantino's own Reservoir Dogs/Pulp Fiction revolution (would QT have been a thing without Soderbergh?), it catapulted Soderbergh, Miramax Pictures, and the rebranded Sundance Film Festival into the spotlight for a time. A positive development on the surface, full of the promise of a return to the new American indie movement of the '70s. But the seeds for disappointment were sown fast when Disney bought Miramax in 1993, something Soderbergh himself kinda-sorta predicted in contemporary interviews. Indeed, the concurrent smash of Tim Burton's Batman the same year as sex, lies, and videotape, a distinct event at the time, has proven itself half a populist dovetail. By the end of the '90s, there was no distinction, and the idea of "independent" wouldn't hold currency again until the Internet, Kickstarter, self-distribution, VOD. The Weinsteins confirmed that cynicism with their practices aimed at the bottom line and awards consideration through catering to an imaginary Joe Lunchbox demographic. Independent film? Independent of what?

For the uninitiated, sex, lies, and videotape essays the suburban malaise of sisters Ann (Andie MacDowell) and Cynthia (Laura San Giacomo). Ann is married to boring John (Peter Gallagher), who happens to be boning Cynthia on the side. Enter drifter with a camera Graham (James Spader), impotent (or so he says) yet kinky in his desire to record women confessing their sexual fantasies for his private home-video enjoyment. Of all the things sex, lies, and videotape does well, it accurately identifies how pornography in the Eighties became, through the widespread adoption of VCRs, a middle-class thing to be pursued in living rooms rather than a low-class thing, furtively enjoyed in Times Square arenas. It predicts the proliferation of "amateur" as a porn category, even "revenge porn" in the capture and distribution of illicit material against the will of its subjects. When one character objects to a saucy recording because it could be beamed "to satellite" and distributed, it betrays an understanding of the dangers of something like a worldwide dissemination of information and its impact on ideas of privacy. The film is as prescient in this way as Videodrome, and without much imagination, you could place Spader's Graham in that chilly Cronenbergian context. sex, lies, and videotape doesn't pack much of a wallop anymore, though, if it ever did--exhibit A along with Robert Rodriguez's deceptively-marketed El Mariachi of the Weinsteins' fat fingers clamped tightly on the pulse of middle-American tastes and tolerances. Objectively, Soderbergh's film is a John Cassavetes picture that cares what you think of it.

Sexy mainly for Laura San Giacomo's freedom in her screen debut (and dead-on Georgia accent) and for a creation mythology that says Soderbergh wrote the script in a week and shot the movie in a month after unsuccessfully courting first-choice Elizabeth McGovern with work her agent deemed "pornography," sex, lies, and videotape is mostly a series of Mars/Venus conversations and expository sequences. Its conclusion is a standard, conservative resolution, featuring the sort of punishment for the wicked one finds, rote, in Production Code-era pictures. It doesn't go anywhere legitimately daring, although it threatens to do so for the duration. More's the pity, as it appears the cast was game for anything. Much is made, too, of how this movie salvaged Andie MacDowell--taking a beating at this point in her career for her infamous over-dubbed performance in Greystoke and embarrassing turn in St. Elmo's Fire--as a viable female lead. In truth, MacDowell is typically dreadful and not at all up to sharing space with Gallagher, Spader, or Giacomo. If you wanted to romanticize it, you could say that without this film, Groundhog Day wouldn't have been possible, except that any of a number of actresses could have subbed for MacDowell in Groundhog Day with no appreciable loss in quality.

Today, it's hard to see what was so attractive about sex, lies, and videotape. Not even reading Soderbergh's extensive shooting diary and screenplay reveal that it was anything more than lucky in catching the wave of a certain zeitgeist of audiences congratulating themselves for surviving the blockbuster decade. (Chronicling a first-time hyphenate's steep learning curve, the book is actually more compelling.) It's a first film through and through, from its mannered pretension to a push-zoom Soderbergh admits on the commentary track is something every inexperienced director wants to try. Though it's not a disaster, hindsight casts it as special largely for its timing.

To Soderbergh's credit, the soft-spoken director seemed to acknowledge this from the beginning: he's always expressed genuine surprise that what he himself perceived as an audition reel destined for dtv became the inciting point for a decade of Hollywood realignment. For what it's worth, I like the beginning of the film quite a lot, from the opening shot of pavement rushing by through to Graham towelling himself off in a gas station restroom and John spinning his wedding ring on his desk as he's arranging a tryst with his sister-in-law. It predicts Soderbergh's way around the editing bay. This introductory montage is the only time the guy who would do Haywire emerges in infant form, and I'd argue that while his more recent stuff garnered less attention and acclaim, it's actually more daring in terms of challenging conventional filmmaking and storytelling. Most odd is that Soderbergh, an artist who's always apologizing for flirting with the mainstream to fund his personal features, started his career that way, too. sex, lies, and videotape is declining. It declines to take much of a stand on anything, avoids controversy, ends up self-consciously talky, and adds a couple of voiceovers. It's not comfortable with silence and barely comfortable with itself at all. That Soderbergh followed up this bare-bones debut with Expressionism (Kafka), period patina (King of the Hill), self-loathing (Schizopolis), noir (The Underneath), and Spalding Gray (Gray's Anatomy) speaks volumes about exactly how sex, lies, and videotape misrepresented the kind of artist he wanted to be. sex, lies, and videotape is a lot like Casablanca if you turn it just right: a revered, landmark film more interesting and insightful for its circumstances than for its execution.

THE BLU-RAY DISC
A director-approved 1.85:1, 1080p presentation anchors Sony's 2009 Blu-ray release of sex, lies, and videotape. The image looks laudably filmic, preserving the sometimes-dense grain of the source without any undue processing. Every detail of every photograph Graham uses to decorate his spartan apartment is there for your approval without a hint of either edge-enhancement or DVNR. I liked seeing the pixels in the titular videotapes, which predict for me the confessional function of the device in Almereyda's Hamlet. Incidentally, if you haven't seen said Hamlet, that's a movie that deserves the kind of deluxe treatment sex, lies, and videotape has received here. Overall, the transfer definitely resembles a film shot for a pittance twenty-five years ago (under the circumstances, the flat colours and dynamic range are to be expected), but that's as it should be. The original Dolby Stereo soundmix has been beefed up to 5.1 Dolby TrueHD in an equally unobtrusive, "true" way. It's a centre-channel-driven track, alas and of course, but clear as a bell and above reproach.

An audio commentary ported over from the 1998 DVD release features Soderbergh and Neil LaBute talking about the film some of the time and everything else the rest of the time. LaBute betrays, even at this early date, with only two films under his belt, a dislike for critics that Soderbergh gently deflects. LaBute calls that first shot of Graham in a bathroom the picture's first "sex scene" and, again, Soderbergh demurs and repeats his regrets that he didn't get a chance to rewrite much of what he now sees as clumsy. It's an affable yakker that doesn't reveal much beyond what's already known about the film, but it does capture LaBute in a laudatory mood and Soderbergh in a modest one. I got a little thrill when Soderbergh mentioned that he's in post for Out of Sight, the movie that cements him as a great director in my mind. Indeed, it's impossible to listen to this track without trying to place where each director was at that point, and is now at this point.

SD video-based extras launch with "20 Year Reunion at Sundance" (3 mins.), a disappointing puff piece that offers a few quick soundbites from the cast and Soderbergh about how they never suspected the film would garner so much attention and yadda yadda yadda. Better would be a real accounting of what the movie wrought, for good and for ill. You find more of that, weirdly enough, in vintage pieces like the three-part "Steven Soderbergh on the Trailers" (4 mins. in total), in which a twenty-something Soderbergh explains that he submitted an expressionistic piece for a trailer only to have the Weinsteins re-edit to their own liking in a panic. Should've served as a warning all around. You can watch the trailers--Soderbergh's and the Weinsteins'--with or without sparse commentary from the director. "Steven Soderbergh on..." (8 mins.) is another vintage piece wherein the young filmmaker barely suppresses his surprise that a line like "men fall in love with who they're attracted to, and women become more and more attracted to the men that they love" was taken as a sermon from the mount.

A text-only "Notes on the Remastering Process" goes into some detail behind the philosophy and technique brought to bear in resurrecting sex, lies, and videotape for this "definitive" edition, while a "MovieIQ" option allows you to watch the flick "Pop-Up Video"-style. I tried it for a while before abandoning the whole process as clunky and irritating. Honestly, if you want to know who someone is or what a song is, there's the IMDb and Shazam, respectively. Grow up, already. Trailers for Obsessed, the first season of "Damages", The Da Vinci Code, Casino Royale, and A River Runs Through It round out the disc.