by Walter Chaw I felt real pain as Monster-in-Law unfolded. It was the variety of headache that begins behind the eyes before settling somewhere in the gorge. Two whole lines in my notebook were devoted to the word "hate," and true enough, it took all of five minutes for me to know that I despised this film. Five minutes being the same amount of time it takes for the picture to resort to a dog-humping gag, something that has never been funny in any incarnation and is always, always a sign that the oft-dredged barrel bottom is getting scraped once more, with feeling. Monster-in-Law has Jane Fonda playing a fossilized Barbara Walters manqué who attacks a Britney Spears manqué on the day that Fonda's Viola Fields is fired. (The faux-Britney has mistaken Roe Vs. Wade for a boxing match, a crime of ditz maybe less egregious than, say, cheerfully having your picture taken on a North Vietnamese gun battery circa 1972.) Meanwhile, Jennifer Lopez continues to do a whinier, Puerto Rican Melanie Griffith. But the picture isn't about the age issue or the class issue or the race issue--how could it be when Viola owns an eye-rolling, foolishness-talking mammy slave archetype named Ruby (Wanda Sykes)? No, Monster-in-Law isn't about anything on purpose except Fonda's too-real desperation, great draughts of random ugliness, and extorting money from people who will say once the dust settles that I'm out of touch.

Try this on for size: Charlie (Lopez) is a free-spirit--a dog-walker/temp/artist/designer who falls for a hot Ken doll in doctor's scrubs named Kevin (Michael Vartan) in spite of his complaint after they meet-cute that his mother pages him a dozen times a day. That's the first warning, dear; the next several hundred involve the never-addressed issue that Kevin's mother Viola doesn't try to hide the fact that she really wants to fuck her son and resents Charlie for getting there first. Part of this is the fault of a screenplay that could be the most offensive excuse for a comedy since Bringing Down the House, and part of it is the fault of Fonda: pushing, pushing up daisies, she can't resist the bulimic's mating cry of "please want me." What's made crystal clear is that Viola is a psychopath fresh from the loony bin--a woman, it's cautioned at the outset, incapable of handling any stress. Her mental instability is the cheery set-up for her plastic son's announcement that he's going to marry the completely worthless, mush-mouthed Charlie intercut with scenes of Ruby scampering for cover whenever massah goes crazy. (How much does a black woman go for nowadays, anyhow?) My favourite part is when Viola relates a charming story about Snoop Dogg's misogyny and how all of the Sultan of Brunei's hundred-some wives professed ignorance of the rapper's disdain for women.* With hateful, openly misanthropic garbage like Monster-in-Law floating around to tickle the funny bones of would-be shut-ins, it's not worth wondering why someone dangerously allergic to nuts would have a big bag of them in her kitchen.

Monster-in-Law has a heart as small and cold as an ice cube. It features a tableau in which two underclass minority women share a knowing gaze over the head of an over-medicated upper-class white woman, yet it doesn't have the balls to turn Viola into the sledgehammer racist she appears to be. Instead, as Charlie fawns over a picture of Viola taken with Oprah, Ruby cracks, "There's a cast photo of 'Good Times' over there, too!"--which means absolutely nothing in or out of context except perhaps that the sassy Flo-on-"The-Jeffersons" maid is suggesting that Charlie is some kind of, what, racist? Sycophant? Afro-wannabe? TV Land aficionado? It deflects attention from the class struggle embedded in a film with this kind of premise--but not even a party where Viola has invited "75% of the world's royalty" can provide friction beyond the tired "old girlfriend" trope where Charlie catches her beau in a "it's not what you think" clinch. There's every opportunity in the world for Monster-in-Law to say something, but the only thing it cares about is how best to gratify the type of audience that feels reassured when people call something a "chick" and/or "date" flick rather than offended by all that those terms imply. It's a condescending, appalling film for people who are grateful for the help, only too glad to have their suspicions about the world justified for them by an actress long past her prime and another who'll never have a prime. And it's a chick flick directed, as most of them are, by a man. Chew on that. 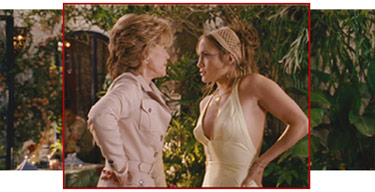 THE DVD
Removing the shrink-wrap from New Line's deadly two-disc Platinum Series edition of Monster-in-Law inspires the same trepidation with which one approaches a gift from Jokey Smurf. Disc 1 gives you the choice of watching the film in either 2.33:1 anamorphic widescreen or fullscreen; not watching it at all still the most attractive option, the image nevertheless looks pleasingly warm and sports fulsome detail. A low-achieving soundmix is presented cleanly and crisply in 5.1 Dolby Digital. On another bitstream, actress Wanda Sykes, producer Chris Bender, production designer Missy Stewart, and DP Russell Carpenter join director Robert Luketic for a feature-length yakker. Luketic plays MC, putting poor Carpenter on the spot by betrothing him to all his future films, concocting with Sykes an incongruous backstory for her character (a transparent and fruitless attempt to subvert a stereotype--too little, too late), and crediting Jane Fonda with little beyond Barbarella. Throughout, Luketic reaches toxic, James Lipton levels of sycophancy, and the fact that he says he hired Titanic lenser Carpenter because "we needed everything to be Titanic-sized" without mentioning egos or posteriors in conjunction is just unforgivable. Trailers for Wedding Crashers and The Sisterhood of the Traveling Pants cue up automatically, while a soundtrack spot and a separate block of previews for The Wedding Crashers, The Whole Shebang, The Sisterhood of the Traveling Pants, and Malick's The New World are accessible under the special features menu.

The second platter begins with seven deleted scenes (12 mins.), prefaced by an extraordinarily brief introduction from Luketic. It's something along the lines of "Thanks for watching! I'm Robert Luketic!" The first scene is Fonda in confession whilst in the nuthatch, the second Jennifer Lopez emoting "nervous" and imagining a mob hit whilst on the way home from meeting her titular nightmare, and so on and so forth. It'd be ten times more dispiriting for me to describe each of these elisions in detail than to simply say that there's a lot of screaming and jumping around, more queer envy, more Michael Vartan and Lopez playing Pong with the unspeakable dialogue, and more studied non-yuks at the expense of the best actress of her generation--and one of the worst of hers. To the credit of everyone involved, though, a scene left on the cutting room floor resurrects the curtain nonsense from Gone with the Wind. Unfortunately, it wasn't burnt with the rest of the bio-waste.

"Ruby's Make-up Bag" (2 mins.) is an extended faux-video mock-up of Wanda Sykes dancing like the neo-minstrel she's turned out to be to the Britney-pop of the bimbette Fonda's character tries to throttle as the film opens. "Gag Reel" (5 mins.) is a lot of people missing cues, not getting cues, or doing their best to pretend that Lopez's constant "Are we rolling? Should I start acting?" is good-natured and not extraordinarily bitchy. The general tenor of the bloopers, too, suggests that there was not actually a director on set; combined with a few junket interview snippets of Vartan and Sykes simulating wit (spot it by the way their lips are drawn back from their teeth), these and several "Are we still rolling?" queries from Fonda ("They're not fond of cutting") and Lopez underline the idea that Luketic basically turned on the camera and went off with his tutor to learn to read or something.

Clicking on "Documentaries" leads as I feared it would to a sub-menu housing multiple documentaries. "Welcome Back, Jane Fonda" (8 mins.) is a rosy, douche commercial of a piece shot like a child paints roses, featuring interviews with Luketic and Lopez (and producer Paula Weinstein) attesting how great it was to work with the screen legend fifteen years since her "retirement." Best is Lopez's "When they told me that Jane might be interested in it...I was like...that would be really cool." Way to extemporize, Jenny from the blockhead. "Keepin' It Real with Jennifer" (6 mins.) finds the titular media maven well into her first decade of trying to resuscitate her image on the backs of second-billers (and her director, natch) waxing orgasmic about how "real" and "easy-going" she is before, in the stroke-off's most disturbing moment, Luketic goes off on a bleary-eyed reverie about how good Lopez smells. Raging Diva, by Chanel. Cost? Your soul. Whatta bargain.

"Robert Luketic: The Man Behind the Monster" (18 mins.) has a title that could refer to almost any aspect of this film and continues the long tradition of B-roll/junket-reel garbage where everyone loved everyone else and isn't this the bestest project ever, ever, ever? Not to be left out, "Vartan, the Man!" (6 mins.) gives the dude a 360-second hum-job--though, in Vartan's defense, this one is a little less pukey, if no less self-indulgent. "Trendsetters: Lifestyles" (5 mins.) concerns the setting and the set-design. ("Many, many challenges," of course, but? "But I think it looks great." There you go, good girl.) "Trendsetters: Fashions" (6 mins.) is the same but with the totally non-descript fashion; when Fonda compares the work done on the film by Kym Barrett with the work of Edith Head, well--best to let some of that shit speak for itself. Three trailers plus non-menu'd trailers for, once again, The Whole Shebang, Wedding Crashers, The Sisterhood of the Traveling Pants, and The New World and a DVD-ROM function promising links and an interactive gallery bring up the rear. Originally published: August 8, 2005.