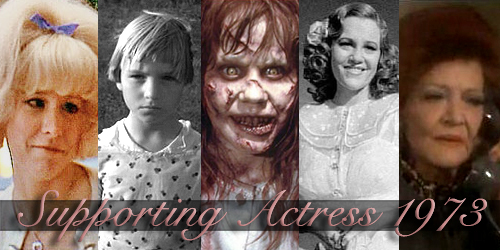 by Bill Chambers Just a heads-up that this week you can find me over at the great THE FILM EXPERIENCE, where I participated in the latest Best Supporting Actress Smackdown in the humbling company of actress Dana Delany, Pictures at a Revolution author Mark Harris, critics Karina Longworth and Kyle Turner, and of course TFE founder Nathaniel R. Once a month, Nathaniel invites a panel like ours to encapsulate and rate the five performances nominated for a given year's Best Supporting Actress Oscar (our own Angelo Muredda contributed to 1968)--a fascinating exercise when removed from the hype and politics of awards season. We were assigned 1973, and it was fun revisiting Paper Moon, The Exorcist, and American Graffiti through the prism of a single actor, as well as encountering a film I can't imagine penetrating my radar any other way, Summer Wishes, Winter Dreams. Subsequent to blurbing the five nominees, the six of us recorded a podcast--my first (you can probably hear the deer-in-the-headlights expression on my face)--that is now downloadable from iTunes. At several points, I got so caught up in what the others were saying that I forgot I wasn't there just to listen. My thanks again to Nathaniel for having me. Enjoy!