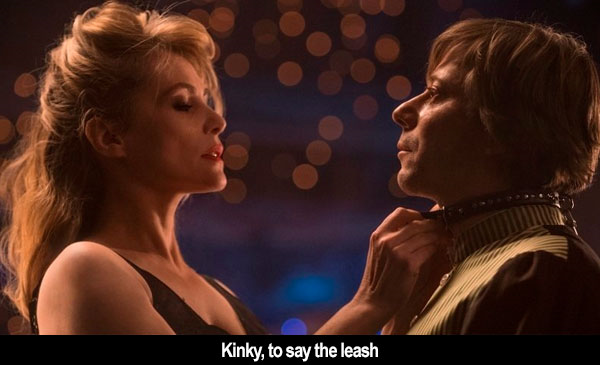 by Walter Chaw If it's stagebound, Roman Polanski's Venus in Fur, an adaptation of David Ives's play that is itself an adaptation in part of the Leopold von Sacher-Masoch novel, is at least not stagebound without a purpose. It reminds of Adaptation. in its awareness of itself as an object open to deconstruction (and Derrida is mentioned in the text to make it metacritical in that sense as well); the fact that it's a play captured on film only underscores its conceit. Venus in Fur is also a career summary for the octogenarian director at a point where his contemporaries are declining steeply in their dotage. Spry and clever, surprisingly funny at times, and at all times indisputably alive, it finds Polanski's themes of gender subversion in high dunder, opening with a quote from the Apocryphal Book of Judith where the titular heroine seduces enemy general Holofrenes and decapitates (read: emasculates/castrates) him as he reclines in post-coital bliss. Polanski casts an actor who could be his younger doppelgänger, Mathieu Amalric, and opposite him in this two-person drama Polanski's own wife, Emmanuelle Seigner--transparent, vulnerable, courageous casting that reminds very much of Hitchcock in his late masterpiece period. Venus in Fur is Polanski's Marnie: a grand survey of all of his sexual peccadilloes that works as apologia, confession, and explication, eventually conveying Polanski's acceptance of himself as deeply flawed, but better for the wisdom.

Thomas (Amalric) is a playwright, wrapping up a disastrous day of auditioning leads for his hyphenate debut when Vanda (Seigner) enters, late, dishevelled, begging for a chance to strut and fret her hour upon his stage. She plays the damsel in distress--scantily-clad, apparently ill-bred and under-educated--to worm her way in. Once the reading starts, she undergoes a transformation not unlike that of the Naomi Watts character in Mulholland Drive. She's a knockout, and Thomas is mesmerized by a woman/critic who appears to understand his work. The rest of Venus in Fur is the interplay between power positions, all of it interwoven with sex and creation and the dynamics of masculine/femine. Its staging is akin to Dogville, the production reducing itself to gestures and subtle sound design. Watch for a moment where Vanda moves to the lighting board to deliver another moment of apparent weakness when, all the while, it is she who controls the environment, pulling the levers and lighting the lights. Polanski transforms a statue of Venus mentioned in the text into a phallic cactus, then ties Thomas to it in a climax that sees female sexuality, freed from male desire, as genuinely horrifying. The delight of Venus in Fur is that it's every inch a Polanski.

A proper companion piece to Polanski's Bitter Moon, Venus in Fur earns comparison, too, to his Repulsion in its complementary movement of female sexuality from the victim aspect to the predator through the agency of sexual violence. In Venus in Fur, Vanda challenges Thomas's (i.e., Polanski's, our own) desire for meek objects to venerate or save, only to subvert it as Vanda reveals herself an able manipulator of expectation. In an "ad-libbed" moment, she assumes a German accent, so that Thomas wonders aloud if the Germans have again invaded his homeland. It's a loaded moment in a film full of them, recalling Polanski's own upbringing in the midst of Nazi occupation and suggesting that fetish has everything to do with sometimes-traumatic personal experience. The film is about Polanski, of course, but it's also about its characters, its audience, and what, exactly, Vanda represents: the idea of Woman, certainly; the image of Her at war with the reality of her. Venus in Fur is built on that eternal push-pull. It's not surprising or deep, necessarily, but it's carried off with tremendous aplomb and an almost gentle good humour. A mature film but not an elderly one, it's a pleasant surprise for all its wisdom, to be sure, but mostly for its barbs and spirited thrusts. There's life in Polanski yet--infernal, yes, but that's only as it should be.