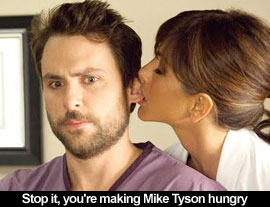 by Ian Pugh A straight-white-male fantasy of the most ridiculous order, Horrible Bosses begins with a trio of working shmoes who are, ironically, comfortable enough to go drinking every night and bemoan how their bosses are making their lives a living hell. Office jockey Nick (Jason Bateman, in his best performance in ages) has been passed up for a promotion by the sadistic Harken (Kevin Spacey); dental assistant Dale (Charlie Day) works under constant sexual harassment from Julia Harris, DDS (Jennifer Aniston, hilarious for a change); and chemical-plant employee Kurt (Jason Sudeikis) is suddenly thrust into the dominion of middle-aged frat boy Bobby Pellit (Colin Farrell, perfection). They can't just quit their jobs because the economy's in the toilet, so the only sane solution is for them to band together and kill their employers. The joke that propels the film is that their poorly-conceived plans amount to little more than one of those online "kill your boss" simulators, and Horrible Bosses occasionally seems to acknowledge its plot as a grossly oversimplified game. A recon mission yields no intel that would be useful to these would-be hitmen, while Kurt puts Pellit's toothbrush up his ass and Dale plays "Angry Birds" on his iPhone to work off an accidental coke binge.

Life could be worse, the film is constantly reminding us*, and in the context of that truism murder is seen as the laziest possible option. Horrible Bosses is about what happens when a strong desire for change comes without a corresponding desire for work. All the complaints and murderous thoughts are driven by bluster and machismo that fall apart as soon as they're subjected to the slightest bit of scrutiny. Dale is the most reluctant of the three to kill his boss, but consider his tipping point: the moment he discovers that Julia has taken explicit photos of them both while he was unconscious. Watch his confusion turn to hysteria as he realizes the implications. ("Rape... rape. This is what rape is! You're a raper!") It's a wonderful scene because the joke isn't about rape, it's about unbridled male panic--in other words, everything the Hangover series holds dear. Julia clearly represents a fear of female sexuality, which is probably why the movie makes no serious threats on her life as the men duke it out amongst themselves. Indeed, their final, nonsensical plan is to "have the crazy fucked out of her" to gain control over her. Horrible Bosses actually follows through with the criticism and self-examination that Todd Phillips can't bear to stomach: Nick is a self-entitled douchebag, Kurt is an unrepentant womanizer, and Dale is, quite literally, a registered sex offender. (He claims he was arrested for relieving himself in a playground at night, but is there something he's not telling us? What right does he have to complain about sexual harassment? It's a deeper, subtler ambiguity than a similar conceit given to The Hangover's psycho-doofus Alan.) However "horrible" the titular bosses may be, they're merely convenient targets into which these self-pitying assholes can channel their insecurities.

Horrible Bosses defines its protagonists by how little they know, how little they're willing to learn, and how they still manage to believe they deserve their place at the top of the food chain. They take offense when they accidentally hire a specialized gigolo from Craigslist's "men seeking men" section; they go to a random bar in the ghetto because that's where contract killers hang out, I guess (they locate a "murder consultant," one Motherfucker Jones (Jamie Foxx), who play-acts the role of a ridiculous black stereotype these morons accept without question); and they even take the time to condescend to a foreign car-service representative. It's about petty self-victimization--and come to think of it, so are Seth Gordon's other movies (the nerd-hating The King of Kong, the eye-rolling nuclear-family portrait Four Christmases). In retrospect, Horrible Bosses completes for Gordon a trilogy that chronicles the stupidities of first-world/white-people problems. Even though the "heroes" are planning a series of cold-blooded murders, their primary concern is to remain free of blame and responsibility. It's almost too convenient that Horrible Bosses should follow so closely on the heels of Scott Adams's sexist diatribes. After a lot of pissing and moaning, the film's final moments find Dale shouting "crazy bitch whore" at the top of his lungs. The line is too big and too ugly to be considered a true catharsis, and in fact only highlights the impotent rage that lies beneath a thin veneer of entitlement. Originally published: July 8, 2011.

*The film's worst-case-scenario is Kenny (P.J. Byrne), who once worked for Lehman Brothers and now tries to sell handjobs at the local bar. return